Philly (Sports) Today: The Eagles Won By This Much, Sixers Won Messy, and Messi Won Big

The Eagles stumbled, fumbled and doinked, but ultimately found their windy way to win number 13 against the Bears. Plus: Tyrese Maxey sweater watch and the rest of the weekend's sports, recapped. 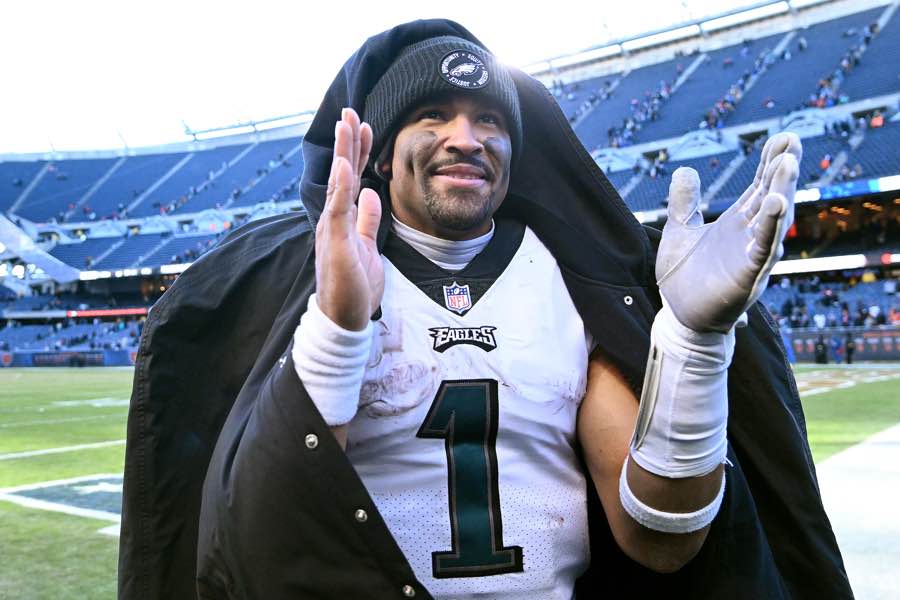 Won by this much. Eagles quarterback Jalen Hurts walks off the field after a win over the Chicago Bears at Soldier Field. (Photo by Quinn Harris/Getty Images)

My comrade Victor is out of the office this week and next, so no news from him, but I’m holding down the Sports Desk today and next Monday — and wishing all of you the happiest of holidays and a winning New Year! —Sandy

From the Skin-of-Our-Teeth Sports Desk …

The Eagles were in the Very Windy City to play the Bears yesterday. In the first quarter, they managed to get a field goal, but nothing much else happened, unless you count a Bears interception of Jalen Hurts. Haason Reddick repaid the favor by clobbering Justin Fields for a 17-yard loss — and Fields promptly brushed his shoulder off and on the next play ran the ball 48 yards for a touchdown. Except! He stepped out at the nine-yard-line, the officials ruled. So instead, David Montgomery ran it in on the next play. Kicker Cairo Santos, though, generously missed the point-after. It was 6-3 Bears with five minutes left in the first half. Well, maybe it would light a fire under the Eagles.

Um. Not exactly. Reddick was playing his ass off, though.

Haason Reddick having a day. Broke up second down, gets second sack on the day on third. Has 12 on the season now. #Eagles defense holds and forces FG attempt.

And there was this curious decision.

On the next drive, Hurts ran a TD in his own damn self.

Philadelphia Eagles lead 10-6 against the Chicago Bears at halftime pic.twitter.com/33fcXsrywD

Boston Scott had a glorious kick return to start off the second half.

And Hurts nailed a terrific 27-yard throw to A.J. Brown.

Just like that, we were at the five. And Hurts snuck it in for another TD. Just a slow start, kids; nothing to fret about!

Cold game in Chicago but the Birds are picking up steam! #FlyEaglesFly #GoBirds

But Miles Sanders lost a fumble, and the Bears recovered and turned it into a TD. This time, they hit the extra point, too. 17-13 Eagles.

And Reddick recovered a fumble as the Bears were working it down the field. All righty!

There was lots of sloppy back and forth in the fourth. Hurts’s throws weren’t particularly accurate, and the Eagles had to try for a field goal. That was when Jake Elliott … well, he bounced the try off an upright.

Still a one-score game. Were we really gonna lose to … da Bears? There were eight minutes left in the game. Fields eluded the defense and ran for a first down but came up lame — and the Bears got slapped with a holding call on top of that. Fields had to leave the game, though he came back later. In came Nathan Peterman, who tossed a pass that was broken up by Darius Slay. The Bears punted, and Hurts hit A.J. Brown, who ran it to the three-yard-line on a 68-yard play! After losing one, the Eagles were at the four-yard-line. Sanders ran the ball for no gain, so they ran him again, but he was just short. Third and goal. Hurts ran it in himself for yet another TD.

Home free and clear, right? Not so fast. The Bears scored yet again, bringing them within a single TD at 25-20.

The Eagles stretched the final minutes out long enough to scare fans but got another critical first down. Game over! Our Birds are 13 and one!

Eagles-Bears instant analysis: The Birds survived in Chicago, coming away with an ugly 25-20 win https://t.co/Dpq5rTXGXk

On Sunday morning, meantime, in an absolutely thrilling World Cup final, Kylian Mbappé scored two quick goals for France late in the second half to even the score at 2-2. Up to that point, the game had been all Argentina. That pushed the game into overtime (Mbappé again?!?!), and hey-oh! It went to penalty kicks! And guess what?

Argentina and France each scored two goals in regulation, both scored once in extra time, and Argentina won in a penalty shootout, 4-2.

See all the highlights from Telemundo and Fox.

The moment everyone waited for 🥺💙

Lionel Messi has finally got his hands on the World Cup trophy 🏆🇦🇷#ARG #FIFAWorldCup #Qatar2022 pic.twitter.com/K4d4LoetGH

On Friday night, with the Warriors in town, Tobias Harris was out with a bad back and Tyrese Maxey still hadn’t come back from that broken bone in his foot, so Doc’s starters were James Harden, Joel Embiid, De’Anthony Melton, P.J. Tucker and Matisse Thybulle. The good news is, Stephen Curry and Draymond Green were out of action for last season’s NBA champs. The Sixers got off to a slow start, and the Warriors were hitting so many threes, especially Villanova’s own Donte DiVincenzo, who was five for five on threes in first quarter. Throw in some sloppy passing and bad ball handling on our part.

The Sixers spent the second quarter hanging around six points back. Maxey was wearing a really sharp sweater on the bench, though.

Harden already had three fouls with a minute left in the half. Melton hit a three to make it 54-51, Niang grabbed a steal, Embiid made a short jumper, and the game was tied at 55. With 37 seconds left, Golden State scored a layup, and Embiid missed one.

Harden redeemed himself, keeping the game close in the second half, and Joel put the Sixers up, 71-70, halfway through the third. The Sixers had an 11-point lead with two minutes left in that frame, and Warriors fans were getting crusty.

That lead would dwindle to seven before a great Harden pass to Danuel House made it 103-93 halfway through the fourth. Embiid was looking MVP-y.

Harden was playing keep-away with DiVincenzo with two minutes left. Embiid had 34 points and 13 rebounds, Harden had 27 points, and Melton had 17. Final: Sixers win, 118-106. Play the song!

In college hoops on Saturday, Delaware State got thrashed by Drexel, 85-52, and the Cincinnati Bearcats buried the La Salle Explorers, 78-60. Villanova came from behind and then held off St. Joe’s for a 71-64 win. And Temple went all the way to Mississippi only to lead against Ole Miss for most of the game, go cold in the fourth quarter, and finally lose, 63-55.