Bird-Watching at the Linc Taught Me: Eagles Fans Aren’t So Bad After All

I'm a Vikings fan who visited for Monday Night Football and made it out alive. 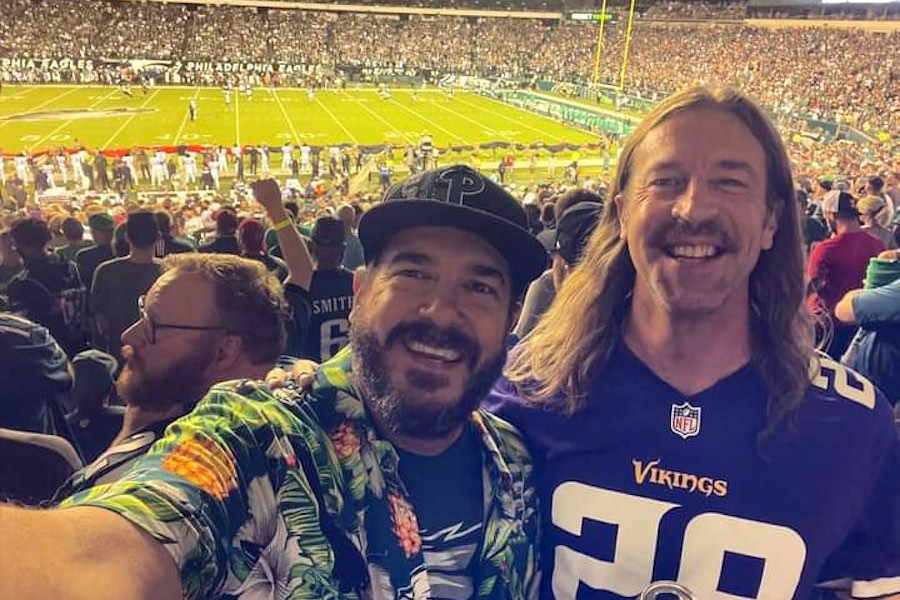 I was preparing to write an article called “How to Get Punched in the Face By Philadelphia Eagles Fans” that would chronicle my experience attending the Eagles-Vikings Monday Night Football game in September. Based on the videos I’d seen from the 2018 NFC Championship game between the Eagles and the Vikings, a punch in the face seemed like it would be getting off easy.

Before departing for the Monday Night Football game, we snapped a quick selfie in our respective purple and green attire. George had previously advised me that wearing a Chris Carter or perhaps a Randall Cunningham Vikings jersey might be a nice extra touch to ensure I’d become a victim of violence at the hands of Philadelphia Eagles fans. Alas, due to limited options, I went with number 28, Adrian Peterson, the NFL’s fifth all-time leading rusher.

George, in a move that surprised no one, went with a horrific ensemble that combined what appeared to be the world’s ugliest shirt (a short-sleeve button-down number featuring pineapples, Toco Toucans, an Australian rosella parrot, hibiscus, plumeria blooms and, yes, a Philadelphia Eagles logo) with his new kelly green jeans.

George is something of a Philadelphia institution among people with eBird accounts. (And yes, these are the folks who may interject “Tennessee warbler overhead” into any conversation this time of year as billions of migratory birds make their way south to the tropics.)

In addition to being my de facto security detail at Philadelphia Eagles games, George is the author of the American Birding Association’s Field Guide to the Birds of Pennsylvania. He is, without a doubt, one of North America’s leading experts when it comes to finding and identifying avifauna. He is also owner of Hillstar Nature, which takes birders and nature enthusiasts around the world in search of birds, wildlife and good photo opportunities.

We parked at the University of Pennsylvania, where George’s wife works. And then, on foot, we crossed the South Street Bridge over the Schuylkill River (which I learned is pronounced more like “Skookle”) and stopped to admire the Philly skyline glowing in the sunset. George monitored incoming messages from a group chat that was now blowing up as people reacted to our photo.

What? Who’s the dude in Vikings jersey?

You guys are going to get pummeled!

Just be the first to attack your friend if things go to shit and you should be fine.

After some cocktails and guacamole at South Street bar Tio Flores (the bartender was inexplicably wearing the same peyote flashback of a shirt that George had on) we boarded the Metro [Ed. note: We found this use of the word “Metro” charmingly oblivious so left it as is] and headed toward the Linc.

As we funneled through the entrance shoulder-to-shoulder with thousands of Philadelphia Eagles fans, I listened to a balding middle-aged man brief a trio of towheaded Vikings fans, all wearing Randy Moss jerseys.

“You guys should be fine,” he reassured them, as game time for Monday Night Football quickly approached. “We’re usually more focused on yelling at our own team than anything else. Now, you guys want to go and do something stupid, things might not go so well.”

“Ohhhh jeeeez” I thought to myself in a thick Minnesota accent, remembering the time my friend got a beer poured on his head for something I said at Fenway Park. (Said friend is a Red Sox fan).

Armed with our $24 Goose Island IPAs, we took our seats in section 121. It was a beautiful late-summer evening. The atmosphere was electric. Just before kickoff, a red-haired man with glasses who was wearing a midnight green Jalen Hurts jersey and a black Eagles hat tapped me on the shoulder. “Welcome to Philadelphia,” he said, proffering a firm handshake and looking me square in the eye. “Enjoy the game.”

By the time Kirk Cousins had thrown his third pick and Bradley Cooper, Bryce Harper, J.T. Realmuto, James Harden and Mike Trout had all been spotted celebrating in the crowd, I knew my life was probably no longer in danger.

In fact, since the unexpected handshake welcome, I’d felt pretty at ease. The fans in our section even began to encourage me a little as I berated the Vikings. “Hey Cousins, Darius Slay plays for the Eagles! Throw it to Justin Jefferson,” I yelled at the top of my lungs as the crestfallen unvaccinated quarterback returned to the visitors’ sideline in front of us.

The gentlemen sitting in front of me started laughing. “Now you’re getting the hang of it,” one said.

The next morning, George took me to someplace called Bob’s Diner in someplace called Roxborough so I could add scrapple to my life list. As we enjoyed a hearty breakfast, we recalled moments from the evening before.

“That guy shaking your hand before kickoff, man, that was pretty cool,” George said. “I don’t think I’ve seen anything like that before.”

We spent the balance of the day drinking Emergen-C from pint glasses and looking for migrating hawks from George’s backyard. That evening, we headed to Kensington with George’s wife, Kristen, to eat dinner at Laser Wolf (I highly recommend the salatim) before going to see Bomba Estereo perform at Brooklyn Bowl. Earlier that day, the Colombian band had been nominated for four Latin Grammy Awards.

Despite the Vikings’ crushing 24-7 loss, I can’t imagine a better visit to the City of Brotherly Love. So thanks to everyone in Philly who not only resisted punching me in the face (or throwing batteries at me, or tipping over a Porta-Potty with me inside it) but actually welcomed me. And special thanks to Bradley Cooper for starring in a great film about bipolar disorder, something I’ve definitely read about.

John Edward Myers is a conservationist, writer and Vikings fan. He lives in Bogotá, Colombia.