Plus, the Krasner kerfuffle, unwanted ice cream, and the entire world agrees that the Astros will beat the Phillies in the World Series. 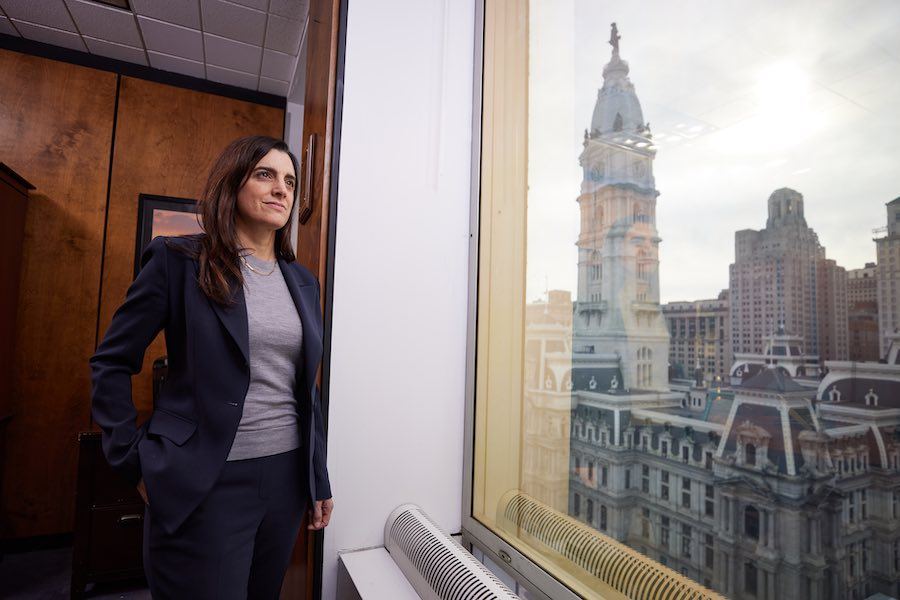 Rebecca Rhynhart, who will run for mayor of Philadelphia (Getty Images)

While all eyes are currently on the mid-terms (well, and the Phillies), they will soon turn to the race to determine who will be the next mayor of Philadelphia. And the already interesting race just got a little (okay, a lot) more interesting, because Rebecca Rhynhart wants to be your next mayor.

Rhynhart, who in 2018 became the first woman to hold the job of city controller, resigned from that position on Tuesday to run for mayor.

“[M]y power as City Controller is limited,” Rhynhart said in a statement. “I can identify problems with how government is operating and make recommendations to improve those operations. As Controller, I cannot force the administration to implement recommendations that will move our city forward. This has been a very difficult decision, but I believe our city needs strong leadership. It is with this in mind that I announce my resignation. While I will no longer be City Controller, I want the people of Philadelphia to know that I remain committed to doing the work of the people every day.”

The Abington-raised Rhynhart joins the ranks of Maria Quiñones-Sánchez, Derek Green, and Cherelle Parker, who recently resigned from City Council to join the race. (Philly Civics 101 reminder: The city has a resign-to-run policy.) “Condo king” Allan Domb resigned his City Council seat but hasn’t announced a run. Yet.

For further reading on Rhynhart, consider the following:

I feel like we’ve been talking about this Dr. Oz vs. John Fetterman debate for a long, long time. Probably because we have. In any event, Oz vs. Fetterman happens on Tuesday night at 8 p.m. The debate airs in Philadelphia on WPHL (aka Channel 17), but you can expect some cable networks to pick it up as well, given the immense interest in the pivotal race.

There’s been so much happening that I almost forgot about the circus surrounding controversial district attorney Larry Krasner. For the latest, read this piece in the New York Times: “Lawmakers’ Report Says Philadelphia D.A.’s Policies Are a Factor in the Crime Rate.”

Is That Clint Eastwood In Philadelphia?!

It’s a great week for old-white-guy spotting in Philadelphia. Over the weekend, Nick Nolte came to town. So when I came across this photo, it wasn’t a stretch to think that this might be Clint Eastwood, presumably, like Nolte, in town for some Philadelphia Film Festival event: 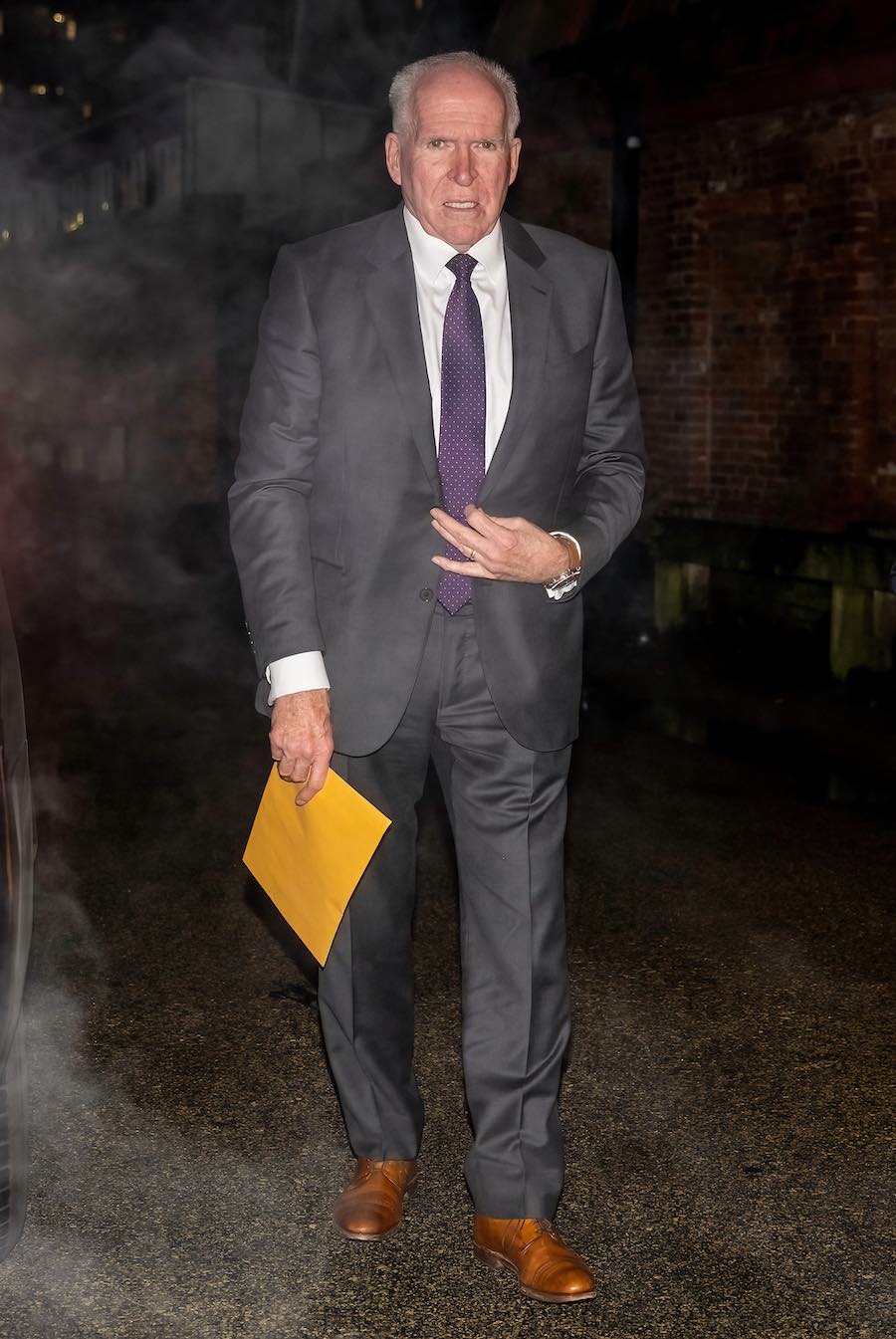 Alas, that’s not Clint Eastwood. It is John Brennan, the former torture-happy head of the CIA. And I have to say, he looks exactly like a former torture-happy head of the CIA. The steam helps, kind of lending a mysterious air to the whole thing. And what the heck is in the envelope? National secrets? Torture memos? Oppo research on, I dunno, Larry Krasner?

Nah, probably a speech. Brennan appeared at the Kimmel Center on Monday night as part of a speaker series.

The strike at the Philadelphia Museum of Art is over. But that doesn’t mean everything is peachy, as management recently discovered when they tried to smooth things over by throwing an ice-cream social.

“While Philadelphia has made significant progress on the complex, national challenge of homelessness, cities can’t solve this problem alone,” said checked-out Mayor Jim Kenney on Monday. Philly is one of 17 towns across the country to get such a grant from HUD. Full details here.

No, Penn State isn’t exactly part of the normal Philly Mag coverage area. But there are a lot of Penn State alum in said coverage area, and so I thought I should call your attention to what just happened at the university.

Uncensored America is a student-led organization at Penn State that likes to present events featuring controversial figures. (The founder is a Penn State grad who got his start in activism on the 2016 Trump campaign and naturally worked on the 2020 campaign as well.)

On Monday, Uncensored America planned to host a speaking engagement with Gavin McInnes (the founder of Vice who became the founder of the infamous Proud Boys) and Alex Stein (some far-right comedian who has a show on Glenn Beck’s BlazeTV). But students got wind of this and raised bloody hell. Demonstrations turned violent, in some cases.

So on Monday, the university decided to put the kibosh on the event. Officials issued the following statement:

Due to the threat of escalating violence associated with tonight’s event, Penn State University Police determined that it was necessary to cancel the speaking event in the interest of campus safety. Demonstrations regrettably turned violent.

The University has been clear that the views and speech of the two speakers at tonight’s student-organization-hosted event are abhorrent and do not align with the values of Penn State. We have encouraged peaceful protest, and, while protest is an acceptable means of expression, it becomes unacceptable when it obstructs the basic exchange of ideas. Such obstruction is a form of censorship, no matter who initiates it or for what reasons. The University expects that people engaging in expressive activity will demonstrate civility, concern for the safety of persons and property, respect for University activities and for those who may disagree with their message, and will comply with University rules.

The climate in our nation has been polarized for quite some time. On campuses across the country, violence is proliferating and individuals are being intimidated and even harmed. This must stop.

No word on who Uncensored America plans to bring in next. But I hear Alex Jones might be able to use the scratch.

And From the Finally-a-Boring-Night Sports Desk …

The entire world agrees that the Astros are going to defeat the Phillies in the World Series, which is just the way we want it, thank you very much.

The Astros won 106 games this season. The Phillies won 87.

The 19-win difference is the 2nd-largest between World Series opponents in MLB history.

The only one larger: In 1906, the 116-win Cubs LOST the World Series to the 93-win White Sox. pic.twitter.com/lLdkggCjpI

Also, the schedule for the World Series is out, and after jerking us around with absolutely random starting times for the league championships, MLB has bowed to reason and decreed that all the games will begin at the exact same time: 8:03. Why :03 and not :07 or :05 — or even, maybe, 8:00? God only knows. We’re grateful for the small stuff.

It’s important to keep in mind, while we’re on the topic, that the Astros actually won a World Series, in 2017. But there will always be an asterisk beside their name — in our hearts if not in the record books — because MLB determined they’d been stealing signals. This would be considered a moral failure by most sports fans. In Philly, we admire the initiative it shows.

Also, the Astros play in a place called Minute Maid Park, named after the orange juice. All righty then. Shades of Anita Bryant! It has a seating capacity of 41,168. Citizens Bank Park seats 42,792. Ours is bigger than yours! What’s more, tickets for the games being played in Philly are getting scalped for north of $1,200. You can score one for a game in Houston for $400. Phut.

Sixers time, back home last night at the Wells Fargo Center. Though they hadn’t won yet this season, even against crappy teams, they managed to be up over the Pacers by 10, 33-23, at end of the first quarter, then pulled out to a 19-point lead, 48-29, halfway through the second. Naturally, they promptly went stone-cold, but they were still up at the midway point, 64-46. “Best half of the season so far!” Kate Scott chortled.

Unfortunately, there was a third quarter. Former Sixer T.J. McConnell came in and got booed, and the Pacers went on 10-2 run. The fourth quarter started out ugly, too, full of Pacer steals and Sixer fouls and bad shots. Tyrese Maxey was trying hard, but nothing seemed to be landing for him. In contrast, 20-year-old Pacer Bennedict Mathurian was something to watch.

Joel Embiid, who’d racked up five fouls, came back in at 6:08 with an eight-point differential, and things settled down a bit, with a 16-4 Sixers run. Final score: 120-106. First win of the season. Yee-haw. Harden was the game MVP, with 29 points. He should be, just for this play against Mathurian:

Dancing On My Own

Not to mention this comparison on the Big Trade:

So far this season 😳

I gotta say, though, this game wasn’t exactly a pleasure.

All Sports Desk coverage is provided by Sandy Hingston.