"Time to find some brass and kick some frickin' ass," he declared in a video he took on January 6th. Plus: Larry Krasner! Free avocados! The Phillies! 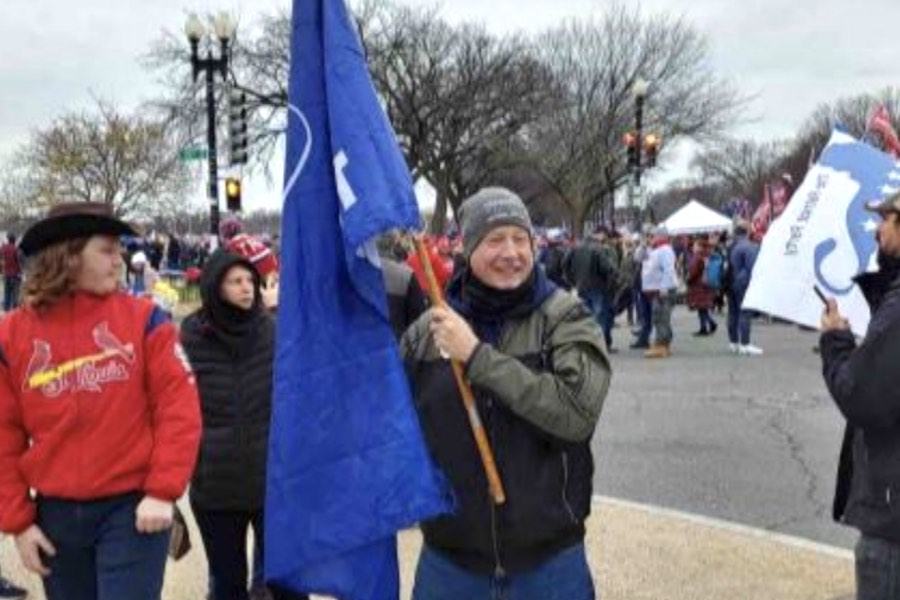 On January 5, 2021, James Douglas Rahm Jr. was just your average South Philadelphian. But on January 6th, Rahm’s life changed. That’s when Rahm decided to join the ranks of American citizens who took part in what we now know as the Capitol riot.

Not long after the Capitol riot, the FBI arrested Rahm in Philadelphia. The feds charged him with several federal crimes, including, most seriously, obstruction of an official proceeding, a felony.

Like many of the other people involved in the Capitol riot, Rahm was smart enough to take video that investigators used against him.

“We broke the door down and we’re going in,” he declared to cheers in one of his videos used in the case. “I think we stopped the vote.”

“We’re in,” Rahm said in another of his videos used in the case. “Taking our fucking house back. We’re here. Time to find some brass and kick some frickin’ ass.”

And like many of the other people involved in the Capitol riot, Rahm took to Facebook to brag about his activities. Before the insurrection began, he posted the following: 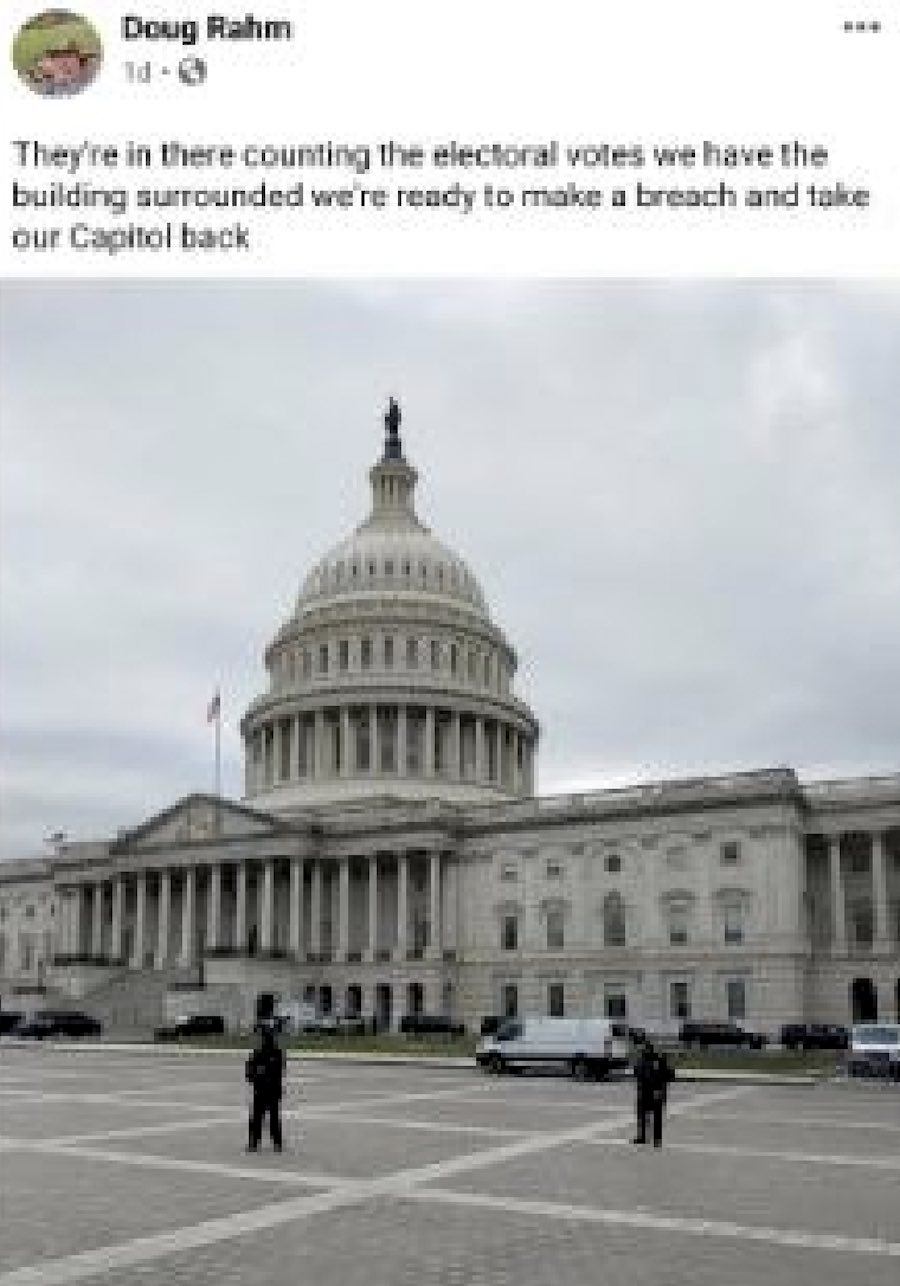 Later, he wrote that he “pissed” in Nancy Pelosi’s office. After it was all said and done, Rahm used Facebook to let his friends know he was okay. “Home alive,” he wrote. “History made. I walked right through Pelosi’s office. I should have shit on her chair.”

In the last week, a judge found Rahm, now 63, guilty of the felony count along with a some misdemeanors.

The court will sentence him on January 18, 2023. He faces a maximum of 20 years in prison on the felony charge alone.

Facing similar charges is Rahm’s son, James Douglas Rahm III (he goes by JD), who went to the Capitol riot with his dear old dad. The father posted photos of himself and JD on social media, including one of the two of them in front of the Capitol. According to court records, the father sent one such photo to his wife, Kelly. “That’s so GREAT!!!” replied the mom. “Don’t post JD’s pic plz.” The dad responded, saying, “I’m deleting my Facebook.” The son has pleaded not guilty and awaits trial. His lawyer couldn’t be reached for comment.

The Rahm men are two of more than 880 people arrested throughout the country for their roles in the Capitol riot. And you can expect more. The investigation is ongoing.

Larry Krasner May Testify at Impeachment Hearing This Friday

Friday should be an intriguing day in Philadelphia as the Larry Krasner circus continues. To catch you up, some legislators in Pennsylvania (Democrats included) want to impeach Krasner. And those legislators held impeachment hearings recently at the Navy Yard in Philadelphia.

A couple of problems.

First, the impeachment hearing was called a public hearing. But it arguably wasn’t, because so few members of the general public were allowed in. (The venue is quite small, but even so, capacity for the public was limited to a third of its actual capacity, and Krasner supporters claimed the people let in were being cherry-picked — and not in favor of Krasner.)

Second, one person was notably absent: Larry Krasner. He asked to be heard. He wasn’t heard.

According to a Krasner spokesperson, the Select Committee (a.k.a. the people who want to impeach him) reached out to his team on Saturday night, asking him to testify in private on Friday with no public access of any kind.

A lawyer for Krasner fired off a letter saying Krasner would happily testify if the hearing was truly public, arguing that it would be “improper and unfair” to both Krasner and the citizenry of Philadelphia to have a hearing behind closed doors.

I am stating today as I have stated in the past that I am happy to answer questions from the Committee in a public hearing. Chair Lawrence’s invitation for me to appear before the committee, but in secret behind closed doors and out of view of the public, just days before the House returns to session next week, possibly to vote for my impeachment at the whim of the House Republican Speaker, is curious. Philadelphians and all Pennsylvanians who love democracy and cherish their right to vote deserve a transparent and public hearing, before the Pennsylvania House of Representatives takes any action aimed at erasing Philly’s votes.

Uh, Is that the 70s I See in the Philadelphia Forecast?

Last week, my neighbor called me and asked if I wanted any avocados, because she got some free avocados at the local senior center. What this really means is that she wanted my guacamole-slaying wife to make guacamole to share with her. I sent my son over to grab the free avocados, and a few minutes later, he walked in with a giant box filled to the brim with avocados. There were so many avocados that it was comical. And we made a lot of guacamole.

I thought it was a bit odd that she’d have so many avocados. But it turns out that this was no avocado anomaly. Apparently, as Preston & Steve have been chatting up on 93.3 WMMR, there’s currently a huge avocado surplus, so Philadelphia is getting free avocados!

Just head to FDR Park in South Philadelphia on Wednesday, Thursday or Friday from noon to 6 p.m. and get your free avocados. Talk about news you need!

I had volleyball last night, okay? The team needed me! By the time I got out (I was not brilliant), the Phillies-Padres NLCS playoff game was in the sixth inning, and the Phils were up 1-0.

Zack Wheeler was pitching a masterpiece after a shaky first inning and would go seven scoreless innings. Bryce Harper homered in the fourth against Yu Darvish, and Kyle Schwarber whacked a monster homer off him in the sixth, sending the ball 488 feet into the upper deck — the longest ball ever hit at Petco Park.

Seranthony Dominguez came in for Wheeler in the eighth and put the good Fathers down 1-2-3. José Alvarado relieved him in the ninth, to face Austin Nola, Jurickson Profar and Juan Soto.

Alvarado walked Profar after Nola grounded out. Soto hit an easy grounder, but Alec Bohm scored an error on his throw to Bryson Stott at shortstop. Two men on, and the blood pressure in Philly jerked high! But Manny Machado flew out to right field, and Josh Bell struck out swinging. Phils win! Way to go, José!!!

On to my taped replay of the Sixers’ season-opener game. All these hot teams are making life very complicated and keeping me up late. The Sixers trailed early but came back to lead 29-24 at the end of the first quarter. Score at halftime: tied 63-63.

In the third, Boston pulled ahead as Jason Tatum went on a tear. The Sixers’ defense was looking shaky, and they were down by 10, 98-88, at the end of the third.

Tyrese Maxey, at least, was “outstanding,” the announcers decreed! But so were Jalen Brown and Jayson Tatum, who each wound up with 35 points. Ah, eff the Celtics. Maxey was still hustling like crazy right up to the end, but Boston won, 117-126.

That’s okay. This was, after all, only the first in a many-game season. What matters is the Phillies’ win. We rule! Next in the Padres series: 4:35 today.