Plus, the Main Line is going to make Tucker Carlson’s head explode. 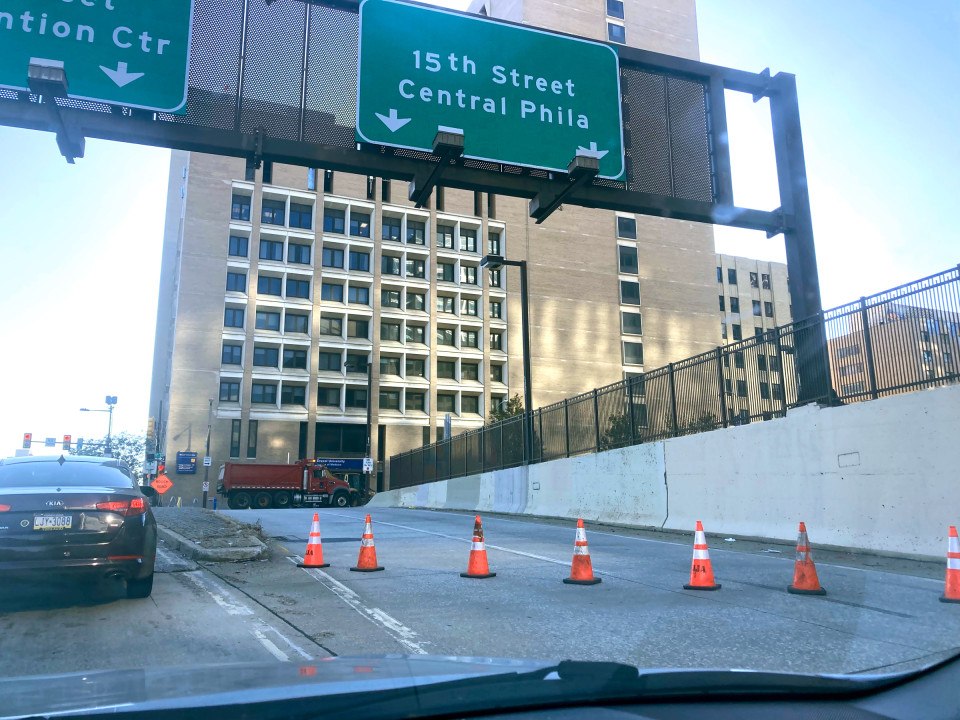 One of many Philadelphia road closures / Photograph by Victor Fiorillo

On Sunday morning, my wife decided that we would skip church. So, after showing the New York Times Spelling Bee who’s boss, I hatched a plan.

I would drive to South Philly to one of those impossibly narrow side streets near 3rd and Federal to pick up two jars of honey from my apiarist friend. Then I would head over to 13th and Mifflin to oh-so-briefly visit another friend and bestow upon him a jar of the golden elixir. I’d grab cannoli from Termini’s for the kids. And I’d make a quick stop at Marconi Plaza to snap a photo of the infamous Columbus box with its new Italian flag paint job.

This should have taken me no more than 90 minutes round-trip from my home on the western edge of Philadelphia. Bing. Bang. Boom. Get in. Get out. Like I’m a member of SEAL Team Six.

Alas, I wouldn’t return home for more than three hours. No, I didn’t stop at the Penns Port Pub. (They are closed Sundays, turns out.) I got caught in an impossibly complex and damn-near Kafkaesque web of road closures that eventually had me feeling like Michael Douglas in Falling Down, sans Uzi.

There were several apparent factors involved in these road closures, mostly being construction and events.

The big one was the Italian-American Heritage Parade née The Christopher Columbus Day Parade, which had much of Broad Street and various intersections with it shut down for long periods of time. And this wasn’t one of those situations where signage or orange cones foretold these road closures. You just kind of got there and found yourself trapped.

SO WHY DIDN’T THEY TELL ANYBODY?

By they, I mean the Mayor’s Office and the Philadelphia Police Department. You see, those departments routinely inform the public of road closures. In fact, that very week, the Mayor’s Office of Communications sent out a road closure alert for something called the J.P. Morgan Corporate Challenge Road Race Series that was happening that Thursday. No, I’d never heard of it either.

But that office didn’t say squat about a big parade that would cause many road closures on and around that major north-south artery we like to call Broad Street.

So I checked with the Philadelphia Police Department on Sunday afternoon to ask why they didn’t notify the citizenry of road closures, the way they have so many times before. A spokesperson for the Philadelphia Police Department told me, “We have not received them yet to release.” Even though the police were the ones blocking traffic! Sounds sketchy.

Then it dawned on me: Was it possible that the police and city didn’t bother to mention the road closures because officials wanted to avoid calling attention to the parade celebrating Christopher Columbus (no matter what they call the parade), which could have drawn out protesters who could have easily outnumbered the crowd that had gathered for the parade? After all, remember the mess surrounding the Columbus box, with the armed men standing guard? Who needed that kind of drama on a Sunday afternoon, especially with an Eagles game kicking off at 4:25 p.m.?

But a spokesperson for Philadelphia Mayor Jim Kenney quickly pooh-poohed my conspiracy theory, arguing that the city picks and chooses what street closures it announces.

In any event, the mayor’s office says it’s working on a plan to use technology (imagine that!) and a public alert system via the police department to keep the public better informed (or informed at all) about road closures, like the one I encountered on Monday morn trying to exit 676 onto 15th Street. Nope, sorry: 15th Street is closed, suckers.

The real tragedy in all this: I never even made it home with the cannoli on Sunday. Mamma Mia! Che peccato!

And from the Holy Mary Mother of God Sports Desk…

You know what happened, right?

There were serious conniptions among the Phillies faithful during the first game of the National League Division Series game yesterday afternoon in Atlanta.

Our boys got off to a sterling start, rocking Braves starter Max Fried with two runs in the first and two in the third, then getting two in the fourth off relievers. Damn! Then they tacked on one more in the fifth! The Braves scored one in the second and two in the fifth—they knocked out starter Ranger Suarez in the fourth, bringing on a regiment of our relievers—but that only made the score 7-3. Plenty of cushion, right? Especially after Seranthony Dominguez served up two perfect innings of relief and José Alvarado notched one.

In the bottom of the ninth, with Zack Eflin pitching, Ronald Acuña Jr. and Dansby Swanson both hit singles. Eflin struck out Austin Riley to bring up Matt Olson, who — OMG, he hit a goddamn home run. It’s a one-run game! Twitter came out to commiserate:

there are two types of Phillies fans pic.twitter.com/Zn7yXLoFac

With the Phils up by one, Nick Castellanos, who already had three hits and three RBIs, gets a diving catch on a fly ball by William Contreras to make it two outs. That brings up Travis d’Arnaud, as millions of Phillies fans hold their breath. But he grounds out to Edmundo Sosa, who throws to Rhys Hoskins at first for the final out. The Phils squeak by, 7-6. Good times!

Game 2 in the series is today at 4:35 in Atlanta. Work productivity in Philadelphia is down by 78 percent. — Sandy Hingston