Philly Today: We Only Found 17 People in Philadelphia Who Donated to Dr. Oz

Plus, chaos in Old City, Flower Show tickets, and more of what the city is talking about. 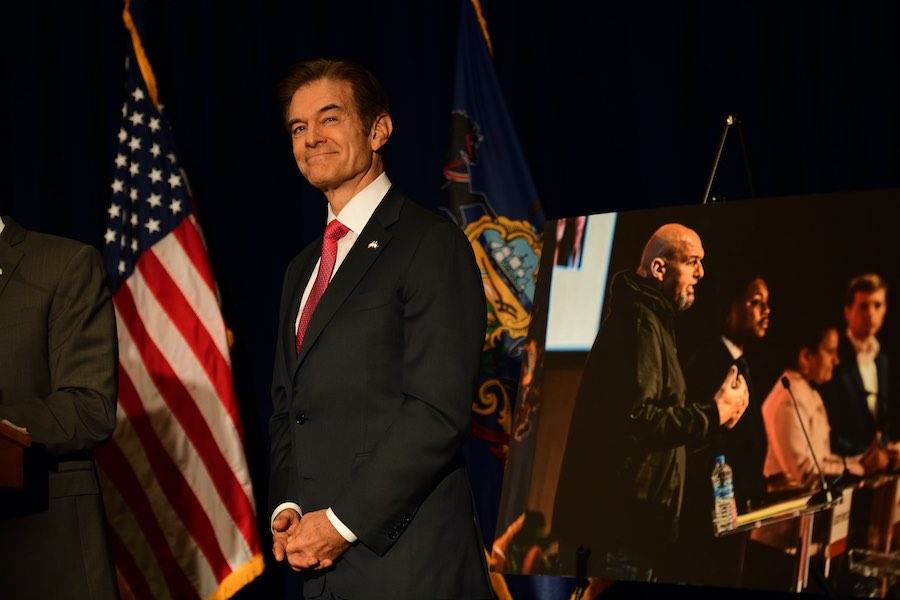 We Could Only Find 17 Philly People Who Made Campaign Contributions to Dr. Oz

The midterms are (finally) just around the corner, and one of the most watched races in the country is, of course, the Senate battle between John Fetterman and Dr. Oz.

Major polls show Dr. Oz closing in on Fetterman, with some data suggesting Dr. Oz could even have a slight lead. But here in Philadelphia, there’s virtually no evidence of any support for Dr. Oz, financially speaking, at least.

I know, I know; Philadelphia is a Democratic town. Bastion for “snowflakes.” Sanctuary city. Blah blah blah. But, still, we do have some bona fide Republicans here. And they’ve certainly made their presence known with campaign contributions for previous GOP candidates. But in the case of Dr. Oz, we could only find 17 people in Philly proper who’ve made campaign contributions to Dr. Oz.

According to data from the Federal Election Commission (FEC), that’s the number of individuals listing Philadelphia addresses who have made contributions to the Dr. Oz campaign as of mid-September.

Dr. Oz’s most loyal supporter in Philadelphia seems to be Rittenhouse socialite Adele Schaeffer, whose bio is very Who’s Who. Schaeffer has given small campaign contributions to Dr. Oz over and over again.

Of those 17 individuals on the Dr. Oz list, six appear to be husbands and wives sharing addresses.

There’s private equity guru George Segall and his wife, Rebecca. There’s cannabis investor and daughter-of-Ed Lindy Snider and her husband Larry Kaiser, thoracic surgeon and former CEO of the Temple University Health System. And then there’s Philly criminal defense lawyer Lauren Wimmer (one of her more infamous clients of late has been the QAnon follower who was allegedly heading to Philly’s vote count in 2020 in an SUV filled with guns and who has since been charged in the January 6th insurrection mess) and her used-car-magnate husband, Brad of AutoLenders.

(Some of those 17 individuals own more than one home including properties outside of Philadelphia but chose to use Philadelphia as their city on the campaign contributions in question.)

Open that FEC search up to some of the towns surrounding Philadelphia, and you do find some other individual donors to the Dr. Oz campaign, with some of the more prominent names including attorney-entrepreneur Vahan Gureghian of Gladwyne (not long ago, he dropped more than $30 million on a mansion in Palm Beach, so he has the money to give), hotelier Jay Shah of Wynnewood, and former Sixers part-owner Michael Rubin of Bryn Mawr. But such examples are few and far between.

We already knew that Dr. Oz was using his own enormous wealth to back his campaign. And due to campaign finance laws, only contributors who have donated an aggregate amount over $200 show up in the FEC database by name and address, so it’s probable that Dr. Oz does have other Philadelphia donors. And then there’s all the dark money that could be getting to the Dr. Oz campaign.

But comparing apples to apples, the same Philadelphia-based campaign contribution stats for Fetterman are so exponentially more than those for Dr. Oz (there are thousands of Philadelphia donors to Fetterman) that the computations broke our calculator, and that magic number of 17 is so low that it’s a stat that’s newsworthy.

Some Philly residents may show up at their local polling place to vote for Dr. Oz come election day. (In 2020, Trump got close to 133,000 votes here.) They just might not be putting their money where their mouths are.

The Dr. Oz campaign did not reply to our request for comment on this story.

That's @CoryBooker sitting on a bar in Philadelphia stumping for @JohnFetterman, who is running for U.S. Senate against one of Booker's constituents from New Jersey. pic.twitter.com/RVVw3OiUgi

So he came to our Black clergy for assistance.

We’re Sure Nobody Will Protest This

Montgomery County is offering pro-bono legal consultations to trans and non-binary residents who want to legally change their name. They should try that in West Chester!

We Know We Needed It, But…

Get ready for two more days of soaking rain and generally miserable conditions.

That’s the theme for the 2023 Philadelphia Flower Show, which is moving back indoors to the Convention Center this year. Tickets go on sale today.

From the Rain? What Rain? Sports Desk …

Well, the Eagles/Jaguars game at the Linc started out ugly when Jags safety Andre Cisco picked off Jalen Hurts’s third pass and ran it back for a touchdown. It got even uglier when QB Trevor Lawrence led an eight-play drive right through the Birds’ defense to make it 14-0. Eagles fans hadn’t even had time to finish their first beers. What’s worse, players were getting hurt in the leftover hurricane downpour: cornerback Darius Slay, tackle Jordan Mailata, receiver DeVonta Smith … a cast of thousands. But then a funny thing happened — something that hasn’t happened for Eagles fans in what seems like a long, long time.

Nobody threw in the towel. Nobody let out the boobirds. Despair didn’t cloak the field like the cloudy skies. Miraculously, every time the Birds looked like they were down and out, big plays happened: a gorgeous James Bradberry interception, two strip sacks from Temple product Haason Reddick, a key fumble recovery, a Hurts TD run. Running back Miles Sanders had a monster game, with two TDs.

There were some nervous moments in the second half when kicker Jake Elliott got creamed by an illegal hit while making a field goal, and a Jags TD subsequently brought the lead down to eight. But Doug Pederson’s return to the Linc wouldn’t be triumphant. Pretty boy Lawrence didn’t look quite so pretty in the pouring rain, but Hurts’s eyebrow game — best in the league! — remained on point. Eagles win, 29-21, with an overall 4-0 record. They’re still the only undefeated team in the entire NFL!

Meantime, on the Phils front, their soggy weekend in Washington turned out pretty sunny. They won 5-1 on Friday, dropped the first game of Saturday’s doubleheader in spectacular fashion, 13-4, but came back to take the second, 8-2, and then won again on Sunday, 8-1. The Brewers very considerately lost their Saturday and Sunday games against the Marlins, both by the score of 4-3. That makes the Phils’ magic number … one!! We play the Astros away on Monday, Tuesday and Wednesday, while the Brewers are up against the Diamondbacks for three more games.

Sixers open their preseason tonight with a visit to the Nets, home of — gee, what’s that guy’s name again? Oh yeah: Ben Simmons!

The less said about the Union’s disgraceful performance in a 4-0 loss to Charlotte on Saturday, the better.