A whistleblower alleges that Vax21, a company founded by Andrei Doroshin's father that operates clinics in multiple states, features problems strikingly similar to those that plagued PFC — including the involvement of Andrei himself. After inquiries from Philly Mag, the Georgia health department has "terminated" Vax21 from its vaccine program. 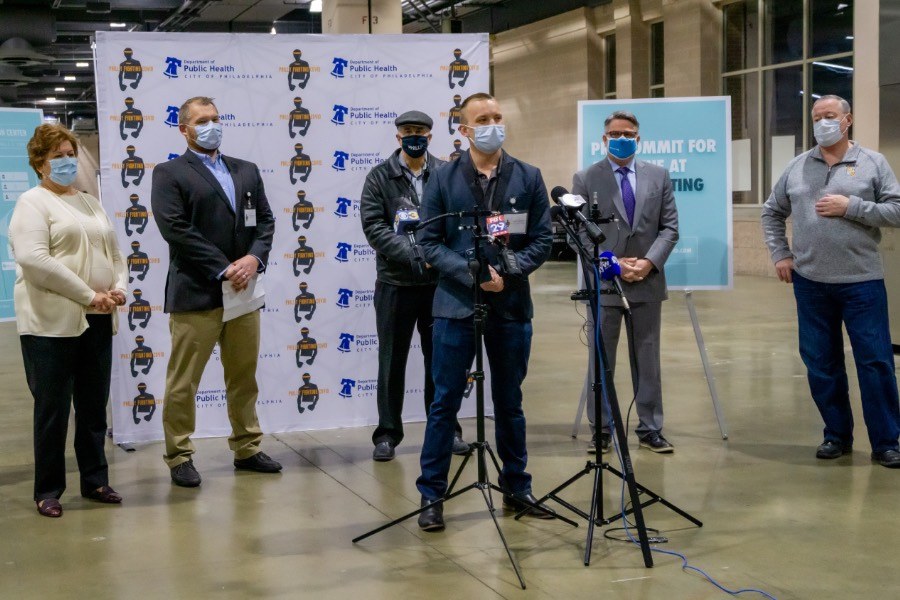 The last time Andrei Doroshin was on our radar, he was the head of Philly Fighting COVID, the group of college-age kids who were awarded the city’s first mass vaccination clinic last year. Originally hailed by some as a new kind of health-care disrupter, Doroshin was later kicked out of Philadelphia’s COVID vaccine program after media scrutiny revealed a résumé’s worth of offenses, including overstating his work experience, stealing doses and giving them to friends, and failing to collect appropriate patient data for testing clinics, to name just a few.

Now, Andrei is back working on vaccination clinics — and it’s going about as well as you’d expect.

The company Andrei is involved with is called Vax21. His father, Serge, is the CEO, and the company has been operating clinics in Georgia and New York, with plans to expand well beyond that. But Ali Loveys, a whistleblower who worked for Vax21 helping to start new clinics in New York, has told Philly Mag of corner-cutting measures that sound strikingly similar to some of the problems that plagued Philly Fighting COVID: a non-employee with no apparent credentials drawing up vaccine; sloppy data collection practices; and Andrei, who has no known medical credentials, allegedly training clinical staff and directing medical operations on the clinic floor.

Serge and Andrei Doroshin didn’t respond to Philly Mag’s repeated requests for comment on the information set out in this story, including detailed questions sent by email.

Just days after Philly Mag contacted Georgia officials on December 11th with questions about Vax21 and its data collection process, the state health department barred the company from receiving or administering vaccine in the state. According to the health department, Vax21 had received 27,000 doses of vaccine in Georgia since July, but hasn’t submitted a single piece of vaccine administration data to the statewide database. Health department officials say this data is supposed to be uploaded within 24 hours of each shot.

Loveys, a pediatrician in Rochester with a specialization in health-care data analytics and software, says she first encountered the Doroshins last January. She’d received an invite to come see the “proprietary” software that Philly Fighting COVID was apparently using to run its clinics at the Convention Center so efficiently. The technology she saw didn’t live up to the hype. PFC was using PrepMod, the same program (Loveys calls it “over-the-counter software”) that vaccine clinics across the country were using. “I realized this was all kind of baloney,” she says.

Nine months later, though, Loveys got a call from Serge Doroshin. Vax21 was planning to run COVID mass vaccination clinics in New York State and also had designs on creating unique software that would make the vaccination experience simpler and more efficient — patient data would be encoded via barcode, cutting down on human error, and after getting shots, patients might even be able to download instant access to the state’s vaccine passport. Would she be interested in helping develop it?

And most important: Loveys says she recalls Serge assuring her that Andrei wasn’t an employee of Vax21 and would only be helping with tangential tasks, like scouting real estate and ordering supplies; he was not to be involved in any clinical operations. Loveys took the job and became the company’s chief medical information officer in October.

While the PFC website was full of boastful (and, as it turned out, often misleading) accomplishments, Vax21 kept its online presence sparse; in fact, you wouldn’t know Andrei or Serge Doroshin was involved at all from looking on the website. Neither has a bio on the site, and their names aren’t mentioned once.

Other publicly searchable documents don’t reveal much, either. Vax21 is headquartered in Texas but was incorporated in Delaware in February, just one week after the first news report that Andrei had taken doses from the Convention Center; the incorporation documents list the company’s “registered agent” as a third-party company that creates corporations on behalf of business owners and promises anonymity. Vax21’s National Provider Identifier, which is required for all health-care providers, lists a Todd Johnson as CEO. Loveys has never heard of him. Johnson, it turns out, is often the name on filings made by the company that did Vax21’s incorporation.

There is at least one place, though, where the name Doroshin shows up. Loveys shared with Philly Mag a copy of paperwork submitted to the Centers for Disease Control in order to receive vaccines in New York. There, Serge Doroshin is listed as the company CEO.

Serge currently lives in Texas, but he raised his children in California, where he worked in real estate and low-budget media production. In 2012, the Los Angeles Times profiled one of his ventures called Moozfly, a website for Spanish-language comedy content. (The company was headquartered in a home Serge owned, which at the time was listed on the market for $1.7 million.) When Andrei was running Philly Fighting COVID, Serge helped out: He once wrote to Councilmember Mark Squilla, inviting him to the opening-day press conference at the Convention Center. Like his son, Serge has been accused of falsifying his work credentials. In 2015, when Serge’s wife declared bankruptcy after a series of failed real estate investments they had made together, a creditor alleged that the couple had inflated their net worth “by at least $110 million to $140 million” and had misrepresented their work experience as developers in order to secure $15 million in loans. The Doroshins denied the allegations in a court filing and later paid $60,000 to settle with the creditor.

When Loveys first started at Vax21, she asked for patient data from Georgia, hoping to get a primer on how clinics operated there. What she found seemed unusual: Vax21 appeared to be billing a large percentage of its patients to the federal Health Resources and Services Administration. HRSA is only supposed to handle claims for uninsured patients. According to an HRSA database, Vax21 has been reimbursed $761,000, which equates to 19,025 total doses at the going rate of $40 per dose. Nationwide, there are more than 17,000 entities that have received HRSA vaccine reimbursements — from hospital systems to CVS to Walgreens to Walmart — and Vax21 is in the top one percent for total reimbursements received in the country.

Loveys wasn’t the physician of record for Georgia. Her responsibility was New York. She ran a few small clinics at a site upstate, but she was also tasked with helping Vax21 open a clinic at 229 Chrystie Street in Lower Manhattan, which debuted on December 3rd.

As the clinic took off, Loveys, who was in Rochester, says she became aware of numerous problems. For one thing, she says, she learned that Andrei was involved in more than real estate and supplies. In one instance, according to a message reviewed by Philly Mag, a Vax21 HR employee confirmed to Loveys that Andrei had “handled [the] training” of medical staff at a New York City clinic, despite having no known medical qualifications himself.

Loveys soon found out that Andrei was also involved with handling patient data — because he was the one sending it to her. The data, by Andrei’s own admission, was “messy.” He wasn’t using the spreadsheet Loveys had prepared for the clinic and had instead created his own. Once, Loveys says, in the column meant to denote injection site, Andrei had listed the clinic address. In another exchange, Andrei told Loveys that “as the chief medics [sic] information officer you were hired to deal with issues such as messy data or imperfect data.” Loveys claims she also learned, after speaking with a physician assistant who was present at a clinic, that Andrei had directed clinical staff to dilute 15 vials of Pfizer — the vaccine is only good for six hours once diluted — at 9:30 in the morning, resulting in several wasted vials by the end of the day.

Loveys put these observations in an email to Serge after the first weekend of the clinic, writing, “Why is [a] non‐employee, non‐clinical person, filling out clinical documentation that a vaccinator is required to do?” She went on, “These are the mistakes of a non‐clinical person. He should not be allowed to do this.” She sent Serge a detailed corrective action plan, noting what she said were problems with staff training and documentation of clinic data. Serge later wrote to Loveys, “As much as you’re shitting on Andrei — he has overseen the successful vaccination over 500 people this past opening weekend.”

The back-and-forth over Andrei’s role at Vax21 didn’t abate over the coming days. After Loveys sent another email to Serge, on December 6th, raising concerns about Andrei — “I’m in an extremely uncomfortable position with Andrei as he is your son and not an employee of Vax21 yet he is involved in handling of vaccine (beyond transport) and clinical documentation,” she wrote — Serge replied that Andrei “will NOT be doing anything clinical going forward. He will be setting up new locations and then leaving.” But Loveys continued to receive patient data spreadsheets from Andrei. And in a December 8th email, Loveys wrote to Serge saying that she had just spoken to a registered nurse at the clinic, who informed her that Andrei had directed him to ignore Loveys. (The nurse didn’t respond to multiple requests for comment.)

On December 10th, Loveys visited Vax21’s New York City clinic in person. She says she outlined what happened next in a second corrective plan, this one sent two days later to the New York City department of health: “A non‐employee, with no clinical background, was drawing up vaccines. He said his ‘boss’ told him to do so. When I asked, ‘Who is your boss?’ he replied, ‘Andrei Doroshin.’” (Loveys didn’t find the person’s name on a copy of an employee schedule for December 10th, nor does it appear on a list of company employees from December 11th.)

Loveys says she threw out all of the vaccine — about 20 doses worth — handled by this person, and then proceeded to vaccinate people herself. This was Loveys’s last visit to a Vax21 clinic. The next day, she received a letter from the company HR department, suspending her and alleging that “staff reported threats, bullying, harassment, denigration and felt unsafe.” (Loveys denies all of this.)

A New York City department of health spokesperson confirmed in a statement that “we are aware of the complaint” by Loveys and said that the department was “addressing with the provider.” The spokesperson didn’t respond to a question asking whether the city has substantiated any of Loveys’s allegations. Loveys has also reported Vax21 to the New York State department of health and has emailed a federal whistleblower tip line to suggest it look into possible HRSA billing fraud in Georgia.

Before getting booted from Georgia, and before Loveys made her concerns public, Vax21 had considerable plans to expand. According to a November email from Serge, the company had its sights set on Texas, as well as the Atlanta and Charlotte airports. According to Serge’s GoDaddy account, which Loveys once had access to, he has also acquired variations on the web domain “booster.com” for 32 states from California to Kansas to Texas to Louisiana to Pennsylvania.

It remains to be seen how that will unfold.