Labor boss John J. Dougherty is in court after being charged in a federal bribery and corruption case along with Councilmember Bobby Henon. Guilty or not, no one man should have all that power. 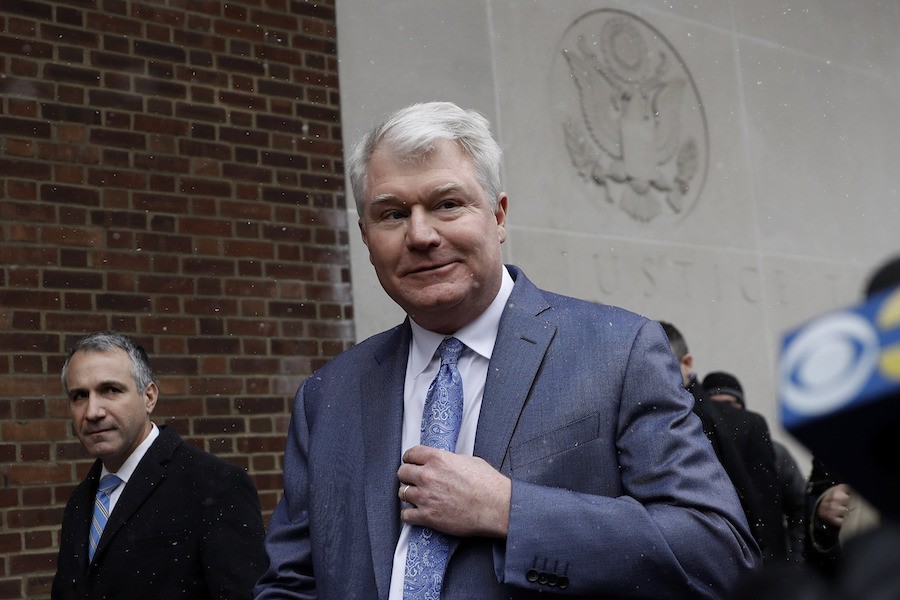 This week, Philly “politics as usual” is on trial.

More than two years after being federally charged for bribery and corruption, Local 98 leader John “Johnny Doc” Dougherty and Philadelphia City Councilmember Bobby Henon are finally headed to court. According to the Feds’ massive indictment, Dougherty allegedly used Local 98 money to buy political power via Henon’s employment with the union (yes, councilmembers are allowed to have additional paid jobs outside of City Council). Both men deny the allegations, with Dougherty boldly telling reporters on Monday that he “have had zero crimes.”

There’s lots of speculation about how a guilty verdict for either of these two will have impact how organized labor, campaign financing, and overall corruption investigations operate moving forward. But why must we wait for a jury to decide the fate of the good ole boys club of Philly politics?

Regardless of the outcome of the trial, it’s time to end the pull men like Johnny Doc have in our political ecosystem. Guilty or not, no one man should have all that power, especially in a town that already has enough problems.

As the leader of the group responsible for the largest independent source of campaign money in Pennsylvania, Johnny Doc ruled the 4,700-member labor organization with an iron fist. I’ve covered his influence for years, long before federal indictments finally came down the pipe. A large number of notable politicians, including Mayor Jim Kenney, City Councilmembers, judges, state representatives and senators, have received Local 98 money — and have remained loyal to the union leader by continuing to accept campaign contributions while not condemning Dougherty’s leadership. Even Councilmember Helen Gym, who often positions herself as an anti-establishment progressive, still can’t help but hold it down for Henon and his affiliates.

But it’s not just money keeping politicians of all kinds loyal to these men.

Just look at the federal complaint: they allege that Dougherty used his influence and power to block contracted jobs for nonunion workers. Through Henon, he allegedly threatened to hold up a vote during the 2015 Comcast franchise agreement and backed the soda tax to get back at a rival union. Dougherty even advised Henon to postpone a vote on an update to the city’s plumbing code so he could leverage it in his election as leader of the Building Trade’s Council, according to the complaint. In other words, Johnny Doc is being accused of doing the work of City Council without ever being elected by the people to do so. That should scare all of us.

And yet, we have often excused this kind of behavior as “Philly politics as usual,” knowing that the powerful men running the show rarely faced consequences — well, until the Feds come knocking. We saw this with disgraced former D.A. Seth Williams, former State Senator Vince Fumo, former Councilmember Rick Mariano, former U.S. Congressman Chaka Fattah… the list goes on.

But the waiting game to see whether or not Doc and Henon are found guilty in a court of law seems besides the point.The bottom line is a system that allows for any outside organization or individual to have that much political sway within the city of Philadelphia  should not be allowed. Instead, we should be working to break up such dynasties and cliques.

Philly politics since the racial uprisings and the pandemic has shown us a different type of system, one that promises a better way. Seeing the notable rise of Black union leaders (such as Laborers District Council’s Ryan Boyer, Philadelphia Federation of Teachers’ Jerry Jordan, and AFSCME 1199C’s Chris Wood) reminds us that diversity should be valued and amplified in these spaces. We’re seeing more alternative influential groups, such as Reclaim Philadelphia and the Working Families Party, that are bucking against the status quo. It’s been refreshing these last two years without the usual media frenzy focusing on how Johnny Doc’s money might influence a particular race (even if it still continues to have influence.)

It should be noted that this trial is only one of three Johnny Doc has coming up (he’s also facing charges that allege that he and five other union officials embezzled more than $600,000 on frivolous purchases and another one charging him with extortion). It’s safe to say that he’ll probably be more preoccupied with his current legal woes than trying to maintain his once unshaken seat at the top of “kingmaking” in Philly politics.

Good. Now let’s all collectively dismantle the rest of those behind the throne, for the sake of our city.