Fully Vaxxed and Worried About Delta? Here’s What You Need to Know Now

We took a look at the latest science and spoke to epidemiologists about breakthrough infections and how to weigh the risks of those vaxxed-only, mask-off environments. 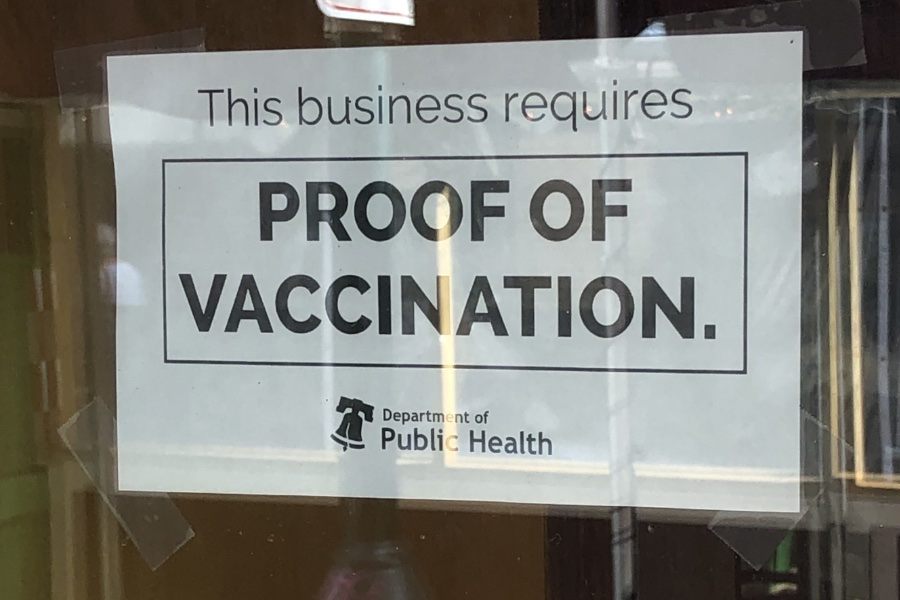 In response to the Delta variant in Philadelphia, some businesses have begun requiring proof of vaccination for service. Staff photo.

In retrospect, there were only about two weeks when it truly felt like the pandemic might be on its way out the door. It was warmer, cases were dropping, vaccines were widely available, businesses were open, masks were off.

It was tempting then to say that things were back to normal. Of course, none of that was really normal. Normal is more like where we are now: rising cases of the Delta variant, new rules on masking indoors, still no vaccine approval for children under 12, and potential signs of waning vaccine immunity.

The news that vaccinated individuals might be able to spread the Delta variant has only complicated the story, especially given the Kenney administration’s new guidelines stating that masks are not required in indoor spaces when everyone is vaccinated. (They are required indoors in all other cases.)  Of course, nothing is risk-free, only less risky; there’s plenty of room for individual decision-making. So as the pandemic enters this new phase — how many times has that phrase been written? — here’s what you need to know about the virus in order to make an informed decision for yourself.

Spread Among the Vaccinated Is Growing, But Still Rare

Scientists have been rushing to understand how well the vaccines perform against the Delta variant. One of the more stress-inducing findings came from a Centers for Disease Control study of an outbreak in Provincetown, Massachusetts. There, 469 people, three-quarters of them vaccinated, tested positive after a series of gatherings in July. The CDC also found evidence that fully vaccinated and unvaccinated individuals had similar viral loads, an early sign pointing to the possibility of spread by those already vaccinated.

But there were important limitations to that study. For one, despite the 469 positive cases, it’s still not clear how many total people attended gatherings in Provincetown. Without that number, it’s impossible to know the true rate of illness. Even more important: There wasn’t a single death from the outbreak.

Other studies — some of which are not-yet-peer-reviewed “pre-prints” — in recent months have helped shed more light on how vaccines are holding up against the Delta variant. The numbers vary from study to study, but the answer to that question is clear: They’re holding up very well.

In England, a study from May looking at the Delta variant found that one dose of the Pfizer vaccine reduced the risk of symptomatic infection by 33 percent; for someone fully vaccinated with two doses, that number grew to 88 percent. In August, a study of Mayo Clinic patients found that the Moderna vaccine was 76 percent effective at preventing infections during the period when the Delta variant was the dominant strain; the Pfizer vaccine reduced infection risk by 42 percent.

And then there’s a CDC paper from August that found that vaccines reduced infection risk in health-care and other frontline workers by 66 percent during the period of Delta variant transmission, though it remains unclear how much the decline in efficacy was due to the variant, waning vaccine protection, or other factors.

While these findings seem to suggest that the vaccines are somewhat less effective at preventing Delta-variant infections, it’s worth keeping in mind a few things. For one, the clinical trials that reported 95 percent efficacy took place before the rise of the Delta variant. In addition, those trials occurred during a completely different behavioral environment: Most people then were still masking and not yet gathering in large groups. And while it’s easy to get hung up on how well the vaccines prevent infection, what really matters is how they do when it comes to preventing serious illness.

Yes, cases are rising in Philadelphia, and yes, more people could be vaccinated here. But the simple fact of rising cases doesn’t mean the vaccines are failing. Nor does a rise in breakthrough cases spell doom. “The vaccine is not perfect,” says Drexel epidemiologist Neal Goldstein. “As you have more vaccinated people, because the vaccine is not perfect, you will see over time more breakthrough cases occurring.”

In Philadelphia — where 65 percent of adults are fully vaccinated and nearly 80 percent have received at least one shot — the current total of 190 hospitalizations remains well below earlier peaks. Tracking breakthrough cases across Pennsylvania is difficult, though, because the state health department doesn’t have that capability yet. (A spokesperson says an effort to compile that data is underway.) But to take one local example, just five percent of COVID hospitalizations at Temple University Hospital are among fully vaccinated patients, according to a spokesperson.

That broadly tracks with the figures coming from other states. In Los Angeles County, a CDC report found in August that, between May and July, only three percent of fully vaccinated individuals to contract COVID ended up hospitalized, compared to nearly eight percent of those who were unvaccinated. The rate of hospitalization among unvaccinated people was 29 times higher than that of vaccinated people.

What Does This Mean For Me?

Everyone has their own risk assessment. But in an attempt to provide some clarity, we spoke to two epidemiologists — Goldstein, from Drexel, and Aimee Palumbo, a professor of epidemiology and biostatistics at Temple — about their thoughts on Philly’s vaxxed-only spaces.

The Riskiest Indoor Settings
To weigh how comfortable you feel unmasked in an indoor, vaccinated-only space, it’s first worth considering what kind of indoor space you’ll actually be in. According to Goldstein, places where people are “forcibly inhaling and exhaling” (think: gyms and packed concerts) are riskier. “For me personally, I’m not doing any of those things right now,” he says. On the other hand, indoor dining, where people tend to be sequestered and in larger spaces with ventilation, is lower risk.

To Mask or Not to Mask?
“I think the prudent thing to do is mask indoors, and this is regardless of vaccination status right now,” Goldstein says of vaxxed-only indoor spaces. With that said, he also emphasizes that if a person has gotten vaccinated and wants to ditch the mask in places that don’t require it, that’s an acceptable decision, too. “If you’ve already done your civic duty in getting vaccinated, then I think it’s your prerogative to wear a mask or not,” he says.

Palumbo says that although it’s conceivably possible that vaccinated people could spread the virus to each other, and then eventually to someone unvaccinated, that hypothetical chain of transmission on its own isn’t necessarily a reason to mandate universal indoor masking, including among the vaccinated. “Even though there’s been a lot of emphasis on breakthrough infections, they’re still relatively uncommon compared to how easily [the virus] transmits among unvaccinated people,” she says. “It’s always been this balance between individual risk and how much we’re willing to accept, and then the public health aspect of it.”

Weighing Risk to Others
Goldstein says he’s not convinced that vaccinated-only indoor spaces will end up doing much to reduce overall transmission, if the result is that unvaccinated people simply end up gathering elsewhere. “I would want to see evidence from other places that have attempted this,” he says. “But it must be incredibly difficult to tease out the impact of this particular policy.”

Still, vaccinated-only spaces would seem to be at least one level of protection more than what we had previously, which was bars full of vaccinated and unvaccinated people, with the latter’s mask requirement based entirely on the honor system.

But it’s worth thinking of things as a hierarchy: Being vaccinated and unmasked indoors has some degree of risk — not just to yourself but to others. For parents with children, for instance, that could be cause for caution. Kids under 12 still aren’t eligible for the vaccine, and in many parts of the country children’s hospitalizations are rising. Most experts say that’s not necessarily because kids are more at risk of severe illness from the Delta variant; it’s just that with more community spread, and young kids an increasingly large percentage of the unvaccinated pool, you’ll see more cases.

None of this is easy. “At some point,” Palumbo says, “we have to make a decision that we’re willing to live with a non-zero risk.” But there’s plenty of space between non-zero risk and responsible behavior. Once you’ve gotten vaccinated, you free up the space to make some more individual decisions. “It kind of comes back to people’s own risk of infection or interaction with unvaccinated people,” Palumbo says, “and being mindful of that.”