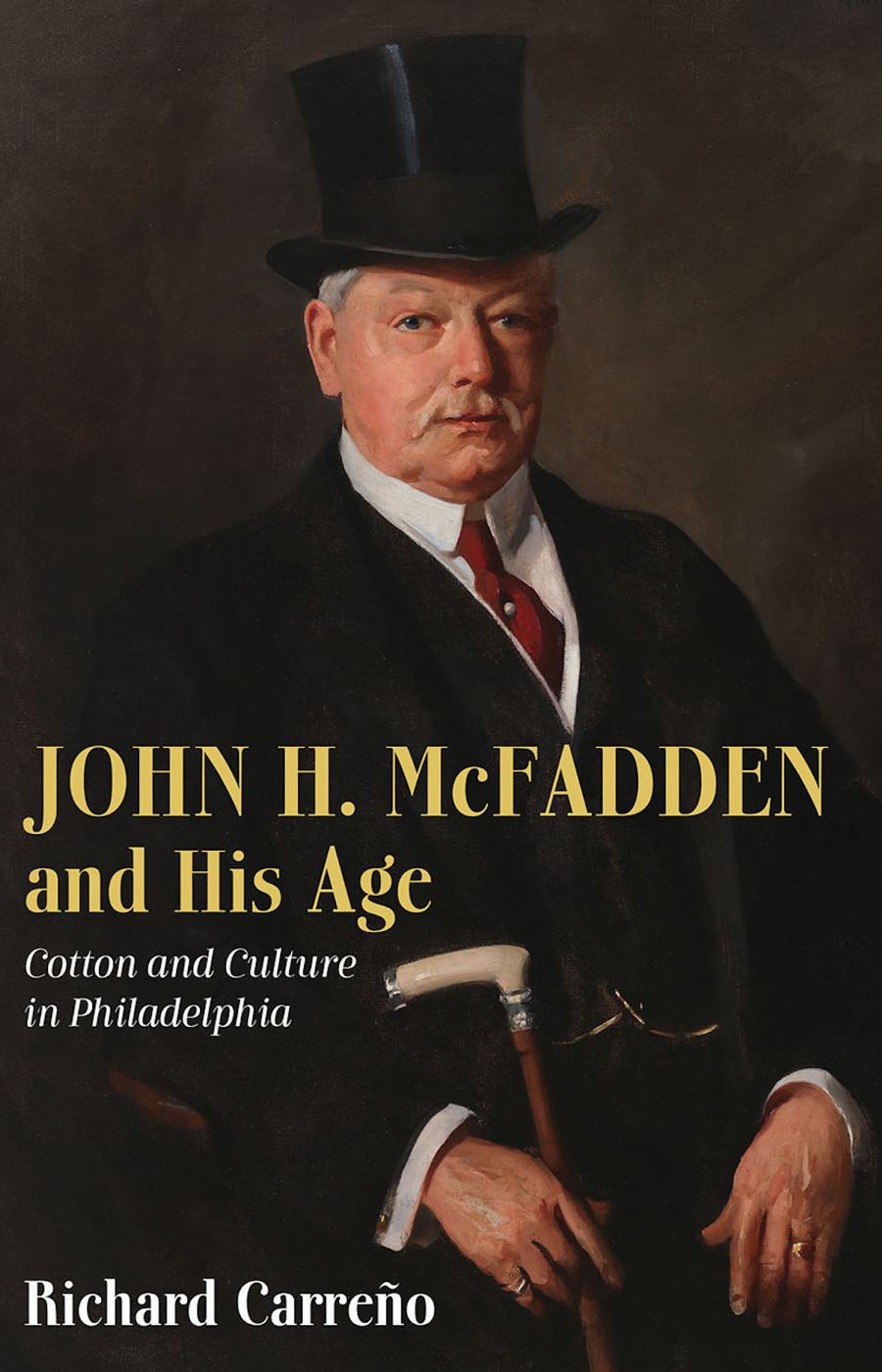 A biography of John H. McFadden by Richard Carreño

So you get an emailed press release about a new biography of a Philadelphian you never heard of, and the subtitle is “Cotton and Culture in Philadelphia,” and you think: Huh? Cotton and Philly? And you almost hit delete. But for some reason — hey, anybody who still writes real books deserves at least a chance — you decide to read the thing. And the upshot is that you spend the next three straight days spellbound, while laughing out loud with delight so often that your husband keeps saying: “What’s that book about again?”

That’s what happened to me with John H. McFadden and His Age, a new biography by Richard Carreño (Camino Books). And let me tell you, as someone who likes to think she knows something about Philly history, I found it both humbling and fascinating to learn about an era and a guy I’d never known anything about.

What made me laugh again and again was Carreño’s impossibly snide commentary on the city’s society at the turn of the last century. (Sample from his discussion of the construction of the Wellington, the commercial hotel/apartment house McFadden built right on Rittenhouse Square, to the dismay of its tonier residents: “Architectural catalogs all agree on one point: none can come up with a description of the Wellington’s architectural style.”)

McFadden, who lived from 1850 to 1921, was an arriviste, a cotton magnate who made a fortune in the wake of the Civil War, as cotton production made a fitful transition from plantations worked by enslaved persons to farms owned by small-time sharecroppers. His firm had an office in Liverpool, England, and it was there, Carreño writes, that McFadden developed an interest in art. He started a collection that eventually, through a series of highly unlikely events and coincidences, led to the building of the Philadelphia Museum of Art.

It was a period when newcomers like McFadden were intruding on the very staid, circumscribed upper echelon of Philadelphia society — this was the heyday of the robber barons — and the clash between the nouveau riche and the city’s longtime gentry led to such developments as the rise of the Main Line and gentlemen’s clubs while making for a really fun read. Highly recommended! Here are just a few snippets of what I learned from it.

While Philadelphia made an international splash with the 1876 Centennial International Exhibition, that proved a sort of last hurrah, as civic prominence had been steadily moving northward to New York City. But Philly’s WASP establishment, Carreño writes, was “hardly miffed by the loss of supremacy. An anonymous letter writer to The New York Times … citing a recent visit, noted that New York was welcome to its ‘dust,’ a nasty byproduct of its ‘business and bustle.’ He preferred, he told the Times, ‘the Quaker neatness and the Quaker quiet of most Philadelphia thoroughfares.’”

John McFadden’s father shelled out for him to attend the most prestigious of local private schools, Episcopal Academy, then at Juniper and Locust streets. (Tuition was $60 a year.) Students learned Latin, algebra, geography, mathematics and French, taught by “none other but a native of France.” An 1864 alumni banquet featured “oysters on the half shell, partridges, pheasant, grouse, corn, potatoes, French peas, spinach, boiled oysters, fried oysters, and croquettes, followed by desserts of Charlotte Russe, vanilla and strawberry ice cream, almonds, raisin, English walnuts and prunes.” The infiltration of riffraff to Rittenhouse Square would prompt the school to move to the Main Line in 1921.

John’s brother and partner, George McFadden, was wed to one Emily Barclay Kennedy, daughter of the director of the mighty Pennsylvania Railroad. Alas, Emily, Carreño notes, “was known for a weak disposition, once so severe that she was hospitalized in ‘critical condition’ after ‘overtaxing her strength’ with robust partying. The New York Times reported, in a story sporting the deadpan headline ‘PHILADELPHIA’S LIVELY PACE,’ that she fell ill to ‘the strain of social activities’ during ‘the merry whirl of the society season.’” Up yours, NYC.

Scorned by the city’s entrenched establishment, McFadden and his Gilded Age Philly peers, including John Graver Johnson, Peter Arrell Browne Widener, and William Lukens Elkins, turned to art collecting in search of “another kind of long-term validation in art’s ageless permanence and cultural luster. To shore up their own legacies as art patrons, they often built opulent go-for-Baroque mansions that rippled with yawning wall space.” But they almost exclusively bought European works: “Cultural snobbery and misconceptions,” Carreño says, “relegated American artists to second-class standing, even in Philadelphia, where one of the country’s greatest practitioners lived and worked under their noses. Thomas Eakins’s house and studio was not far from Rittenhouse Square, at 1729 Mount Vernon Street.”

McFadden’s initial plan was to convert his apartment in the Wellington into a private house museum for his art collection — until he apparently realized that the collect was “too narrowly curated … to attract the large-scale audience he desired.” A temporary installation at the Pennsylvania Academy of the Fine Arts garnered an unheard-of full-page review in the New York Times, Carreño notes: “New York came to Philadelphia to recognize the McFadden group as a national treasure. And a public one, no longer closeted within the confines of 19th and Walnut.” Spurred by the acclaim, McFadden embarked on a buying spree. His death in 1921 and the terms of his will ensured the building of the long-planned, much-argued-0ver Pennsylvania Museum on its familiar hill in Fairmount — though not without much drama.

In McFadden’s day, Philadelphia was known for its Anglomania; the architecture was Georgian and late Victorian, and the neighborhoods had familiar names taken from London boroughs: Mayfair, Richmond, Southwark. Cricket was popular “even among the working classes,” Carreño says, and Philly’s residents were the only Americans who called their sidewalks “pavements,” as the Brits do. “The British presence was so strong in Kensington, a north Philadelphia neighborhood,” he adds, “it was dubbed ‘Little England.’” Imagine that.