The musical ensemble has been spreading cheer throughout the pandemic. Now, they’re branching out to the event-planning biz. 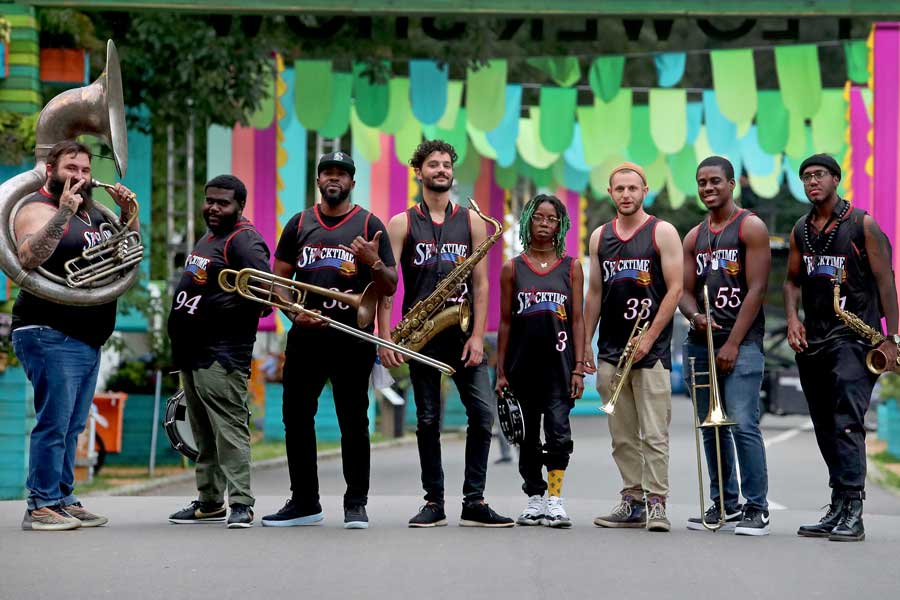 Even if you’ve never heard of Snacktime Philly, you’ve probably heard them. Starting last August, the homegrown brass band’s melodic pop, jazz and R&B tunes filled the air in Rittenhouse Square almost every weekend. What started as a one-off performance turned into a lively routine as Philadelphians gathered, weekend after weekend, to listen, chat and dance (even while masked and socially distanced). Despite a pandemic that shuttered much of the music and entertainment industry, a long, cold winter, and challenges from Rittenhouse residents and the Philadelphia police, Snacktime has emerged as a staple in the city’s ever-evolving music scene.

But the band — which is made up of core members Sam Gellerstein, Ben Stocker, Austin Marlow, Yesseh Furaha-Ali, Michael Spearman and Eric Sheman but also features a rotating cast of instrumentalists who join for different performances — is looking to share more than music with Philly. Gellerstein, a public-school teacher and sousaphone player, is expanding Snacktime’s brand into the event space. A longtime member of Philadelphia’s food and drink scene, Gellerstein wants to bring his love for dining and hosting — along with the brass ensemble — to your next party. Gellerstein sat down with us to discuss the history of Snacktime, the past year’s hurdles, and how the band is bringing something new to Philly’s event-planning scene.

Tell me a little about yourself.
My name is Sam Gellerstein. I was born in New York and raised in Florida, and I’ve been in Philly since 2012. I’m a musician. I teach instrumental music in the school district. I do lots of food and drink stuff in the city.

Before the pandemic and before Snacktime, what were you up to?
For the past about two and a half years, I was teaching. But during the evenings, I was also a full-time musician. I was playing with other people’s bands and playing a lot of weddings and stuff like that. I was playing a lot of different stuff and having a good time, but I was always missing being able to do my own thing, to do something I was truly passionate about in the world of music

So how and why did Snacktime start?
Sometime around November, my friend Daniel McLaughlin, the co-owner of Mission Taqueria, asked me if I could put a band together for his Friendsgiving after-party. I had led bands in the past, but it was something that I hadn’t done for a while, just because I was so used to playing other people’s stuff. I put a little band together. That gave me a lot of inspiration and confidence to kind of feel as if I could lead. Then Jen Zavala from Juana Tamale, who was opening her first location in South Philly, was doing pop-ups at Underground Arts. We decided to do a collaboration event called Snacktime, which was going to feature artists and musicians and a different chef every month. We got through the first one, and then the pandemic happened. So the world shut down.

Then, sometime in June, a friend of mine, Jeff Bradshaw, and I started Clarion Call for Justice, which was an anti-racist brass-band rally getting people registered to vote and spreading activism. That went on for a while, and then around August, Jen hit me back up to ask, “Hey, can you get a little band together for another pop-up?” Jen hired us, and we got a small brass band together playing pop tunes and hip-hop and R&B. People liked it, and it sounded good. So I hit some more friends up.

After that, we were out there almost every weekend from August through January, playing for people. And as we kept playing, we got better. The cast of musicians sort of settled in, and people started to take notice. People were masked up and staying distant but still able to dance because we were playing outside. We just kept going and picked up some cool press.

I know at some point you started to receive backlash from some of the residents of Rittenhouse Square. What happened there?
One Friday, a cop called me from a blocked number, and I didn’t answer. It was a message basically saying, “We want to have this resolved because we don’t want to have to give you all $300 individual fines.” From the top, I knew that was wrong, because we made sure there was nothing we were doing illegally. Because we’re a brass band, we’re not amplified by electricity. And beyond that, the latest we would play would be 10 o’clock. But every single time we played, the cops would come. One day, I just got super-frustrated and wrote this big three-page post on Instagram about how frustrated I was about this, and that’s how we met our lawyer, Leo Mulvihill.

Just to clarify, I don’t want it to sound like it was every Rittenhouse resident, because there were a lot of people that were so supportive and kind to us. But there are people in the area who are highly influential and affluent. Basically, the way it was resolved was we had a big meeting. It came to a point where they were like, “Hey, you guys can play until nine on the weekends.” And that’s where we kind of left it.

But, ironically, a lot of people came to our support, so we’ve been booked with a ton of other stuff. We actually haven’t been able to play Rittenhouse as much as we used to because we’re playing a lot of our own events. It’s kind of funny that the resolution happened just by us picking up more work from the people who really supported us. 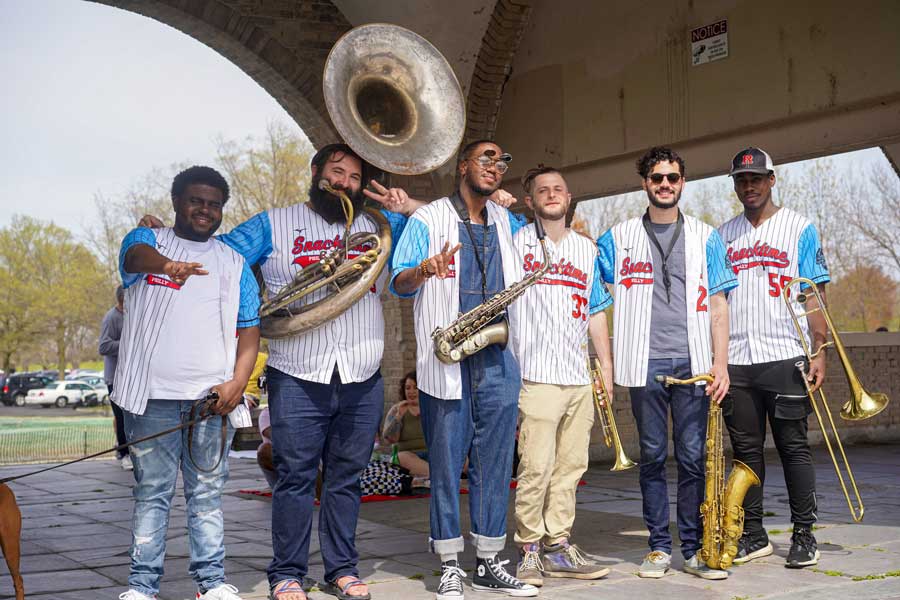 Members of the Snacktime band. Photograph courtesy of SNACKTIME

So what does a typical week-in-the-life look like for you now?
Most evenings, we’re playing. We’re currently contracted by the Live Casino in South Philly, playing before or after Phillies games. We have basically one or two events a month that we produce. We did one last month at Warehouse on Watts. We’re playing a show at Broad Hall. We’re going to do picnics with the Middle Child Clubhouse, with Fiore Fine Foods, and with my friend Alex Delany, who used to work for Bon Appétit. We’ve been asked to do a big music festival. We’re doing lots of cool stuff, just trying to keep it busy.

I always say, we can do anything. We can do divorces, weddings, bar mitzvahs, whatever. We’re just there to make y’all happy.

I know part of the reason you named the band Snacktime was because you had this aspiration to include food as a part of the experience. But most brass bands don’t transition to offering a full event-planning service. Can you tell me about this move?
A big pillar of Snacktime is the fact that I’m deeply connected with the food and drink industry in Philadelphia. Especially during the pandemic, within our hub, I was hanging out with a lot of my friends who are chefs, and we’d put together these big meals. It wasn’t for anything specifically other than to just have a really sick meal. I love to cook and to let people have a really good time. So I figured this could be something that sets us apart.

A tagline that I sort of came up with is, “The party that you wish you were at.” And I don’t mean that in an exclusive way. I just find that a lot of event companies have a pasteurized, sterile, one-way-to-do-it sort of thing. I want to work with the client so that they can have exactly what they want without only giving them the options of, like, chicken, steak or fish. If your favorite food is pizza and for your wedding you want pizza, I will work with some of the best pizza people in the city. I want to open up people to new kinds of cocktails and wines. Snacktime is like putting all the things in my life personally that I love — music and food and people and dancing and love and good feelings — and jamming it all into one thing that hasn’t really seemingly happened yet in Philly. It’s like one-stop shopping for a really fun party.

I also want Snacktime to be accessible. People think that these events have to be super-expensive. The prices of food and catering and bands are just astronomical. Because Snacktime isn’t a huge corporation, we don’t need a ton of extra money. We just need enough to pay everyone a fair, above-scale wage.

I assume that when the world went back to normal, it might have been an easier or a more intuitive choice to just say, “Okay, this has been fun. Now we can all go back to playing our own gigs in Philly.” It seems really ambitious to take Snacktime in this new direction instead. Did you ever think about dissolving the band and going back to your pre-COVID musical life?
I let all the guys know that in terms of my musical life, as much as I will take other work when I can, my priority is Snacktime. If they stick with me, I think this will continue to be a very enriching experience. We do not plan on slowing down. If anything, we’re ramping up for all sorts of different stuff in the future. Unless something really crazy happens, I don’t see Snacktime dissolving for a very long time.

Do you think Philly’s music scene will ultimately make a full recovery post-COVID?
I absolutely do, and I’m already seeing it. I feel like it was just yesterday when we were like the only gig in town, because there was no one booking. But venues are opening back up. Philly is a resilient city, so I think there definitely will be a full recovery. I hope that all the musicians out there stay strong and make sure we’re accepting the right stuff and not just letting people pay us whatever they think because we’re desperate. I hope that regardless of how excited we are to come back, that we’re also safe and protecting ourselves and the rest of our colleagues.

What you see as the future of Snacktime? Maybe even in 10 years, what does the band look like to you?
I hope that we can always be the band that Philly can count on to be there. Maybe one day, a venue, a restaurant. I’m trying to take it day by day, but I’m really hoping that we’re able to create this thing and have it be a permanent part of what Philadelphia music looks like.