We ask the Inquirer columnist about reclaiming the eñe in her name, why she got into journalism, and who’s responsible for solving the city’s homicide epidemic. 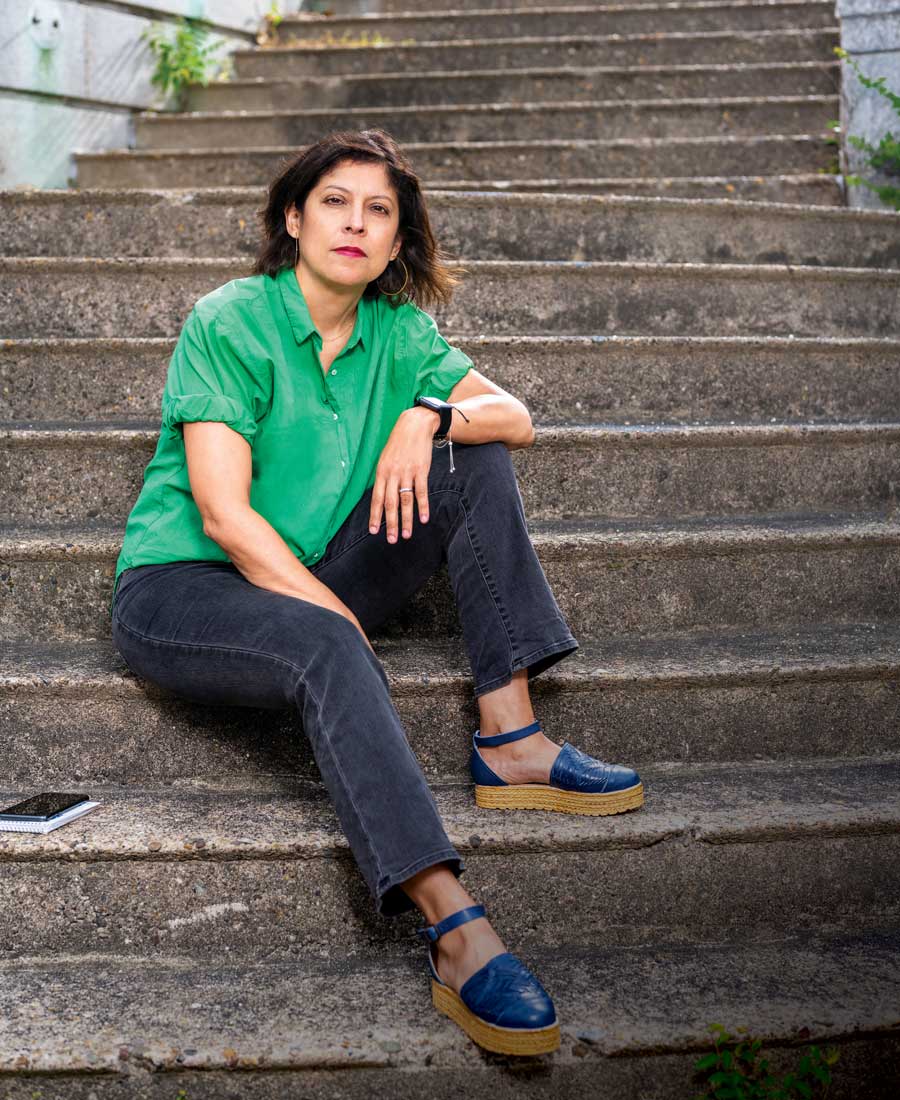 Ten years ago, journalist Helen Ubiñas left the Hartford Courant, where she was the paper’s first Latina news columnist, to become the Inquirer and Daily News’s only Latina columnist — a stat that remains unchanged. She talked to us about homicides, newsroom diversity and hate mail, of which she receives plenty.

Hi, Helen. Thanks for taking time out of your always-on-deadline schedule to speak with me.
What did I do to hurt you or piss you off that you’re having me follow Sonia Sanchez and Angela Duckworth and the producer of my new favorite TV show, Mare of Easttown? [laughs]

Oh, you’re good. My last name is somehow mangled more often than not, and I can only imagine the same must be true for you. So set the record straight.
[Laughs] Even in my own family, people pronounce it differently. They say yoo-BIN-ness. But I’ve reclaimed the eñe in Ubiñas. It’s oo-VEEN-yas. But the trolls like to call me Upenis. Isn’t that witty?

Tell me about reclaiming the eñe.
My parents were born in Puerto Rico and came to New York early in life. My father struggled with identity­ and trying to make things safer. They were told to speak English at home. Proper English.­ Don’t go out there telling folks you are Puerto Rican! So somewhere along the line, he dropped the eñe, and it was never part of my legal name. And when I went to college, I started to try to reconnect with a culture that was stripped from us in an attempt to keep us safe and have us assimilate. We were cheated out of a very rich culture. So I decided to reclaim the actual name. It caused quite a stir in the newsroom. [laughs] We were told if we wanted to add accents to names, the system is not equipped for that. So we were actually spelling people’s names wrong! Journalism 101: Get it right. So I said I wanted to do this, and they were like, Oh my God, Helen wants to put the eñe on her name. And they were forced to figure it out. I guess we’ve come a long way?

Are you back in the physical newsroom these days?
No. I’ve never gotten reporters who spend a lot of time in the office. It goes against what I think journalism should be. None of my stories are in the office, so why should I be there?

My were-they-born-in-Philly radar says you were not. True?
I was born in New York. Spent most of my formative years in the Bronx. I don’t think I have a New York accent, but then, if you don’t have a Philly accent, you must have some other accent, right?

How did you decide to enter the oh-so-lucrative field of journalism?
I didn’t really know I wanted to be a journalist. I took a scenic route through school. Flamed out of several colleges. It wasn’t until I went to Northern Essex Community College that I found myself on the road to journalism. I worked on the college newspaper, and the adviser — who wasn’t even a journalist — helped me discover my love for journalism. This is part of why I am a huge fan of community colleges. I went to schools and had real professors of journalism who didn’t have any impact. It’s not always the people with the longest résumés who have the most impact.

I know you worked at the Hartford Courant before joining the Daily News in 2012. How did you learn about Philly?
I walked everywhere. I remember shortly after I got here, I asked this cop how to get to some location in North Philly. He said it was a shitload of blocks away and told me to get on a train. But I said nah, I’ll walk. I walked and walked and talked to people along the way. And that’s how I learned about the city — doing that all the time. I always got the sense that people in many institutions like city government and the police department thought, Who the hell does this chick from New York think she is? But I think the people who really matter to me know I am legitimately interested in knowing as much about the city as possible and in learning how to make things better for us. All of us.

You spend so much time writing about victims of gun violence. How do you cope with all bad news all the time?
When I’m feeling burnt out, I reach out to these moms I’ve written about whose children have been gunned down. They give me strength and motivation.

But do you ever think to yourself: I really wish I could just write about water ice or Rocky?
Yeah, and I do write something light every once in a while. I recently needed a break, so I wrote about a movie called The Columnist, about a journalist who gets relentless online death threats and becomes homicidal herself. That’s as light as Helen gets. [laughs] But even when I do write about something light, the trolls will still come after me. As a female journalist of color, it’s a reality for me, and newsrooms are just starting to figure out how to deal with it. Super-late, I gotta say. 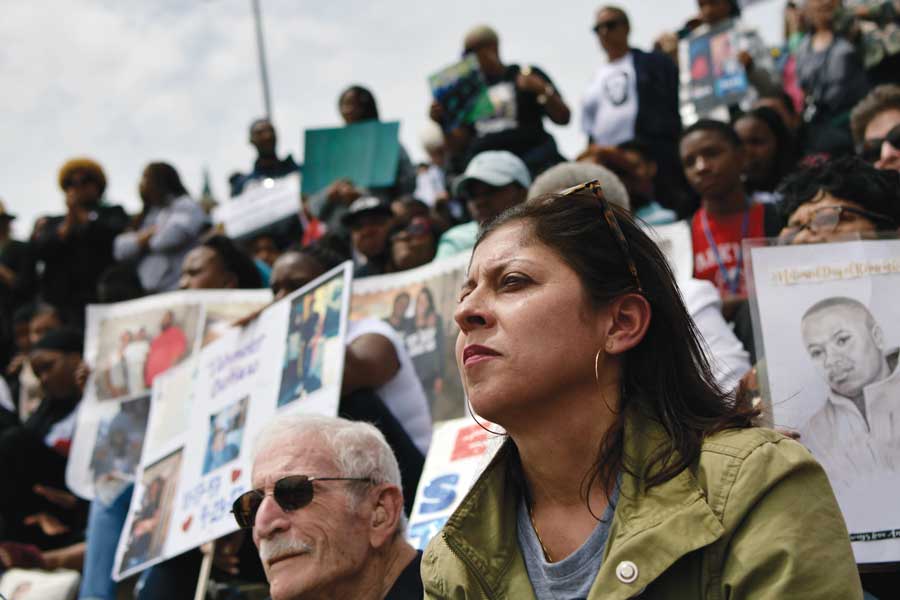 Ubiñas at an anti-gun-violence rally on the Art Museum steps in June 2018. Bastiaan Slabbers/NurPhoto via Getty Images

The police commissioner and the mayor have been roundly criticized for not doing enough to combat gun violence. Is that criticism fair?
Yes. They are the highest public officials. It is fair. You know, they keep saying things like, We can’t do it alone. We need the community’s help. I have huge problems with them leaning on the communities when huge swaths of the community are doing their part. I don’t know what neighborhoods they are hanging out in, but where I am hanging out, people are doing plenty. And officials love to talk about “no snitching.” That exists, but I’ve also been at meetings with police where moms try to give them information and are dismissed. People love to trot these narratives out, but I’m sorry, a lot of that is just straight-up bullshit.

To the casual reader, you might be best known for your controversial column “I bought an AR-15 in Philly in 7 minutes.”
That’s freaking sad.

Well, it went hugely viral, and the paper certainly didn’t mind all the attention. Frankly, it just seemed like a publicity stunt — and one that worked. But was that story actually your idea?
No. Somebody in the newsroom suggested it. I don’t remember who. I was asked if I wanted to do it, and I said, yeah, sure. I’m actually surprised that it got the traction it did. It wasn’t a new story. Lots of journalists all over the country had done this. We had already had so many mass shootings at that point, so plenty of outlets had covered it in a similar way. Can I buy a gun in the parking lot of a Wawa? It wasn’t new or original.

Do you regret writing it?
“Regret” is kind of strong. What I regret was not writing­ a follow-up to tell more of the backstory, to find out what happened to the gun after I turned it in at the roundhouse. But seriously, if, when I die, this shit winds up in my obituary, I’m gonna be pissed and haunt some people. I hope my other work is more remembered — ­my stories about the impact those guns have on communities. Not about me walking into a store and buying a gun.

“Public officials keep saying things like, ‘We can’t do it alone. We need the community’s help.’ I have huge problems with them leaning on the communities when huge swaths of the community are doing their part.”

The Daily News and Inquirer were competing publications when you came here. Now, they’re essentially the same thing in a different layout. Do you find that odd?
I’m not sure how management would say it, but yes, we run the same stories. When I was working in Hartford and leaving to work in Philly, I was absolutely shocked at how small the media ecosystem is here and how little competition there was. And now there’s even less. And I think that’s not great.

Not that long ago, the Inquirer parted ways with its most well-known conservative columnists, Christine Flowers and Stu Bykofsky. Do you feel there’s a place for ­voices like theirs in the paper?
When I talk about diversity in the newsroom, I’m talking about all forms of diversity. Not just that we need more journalists of color — we do — but I think we also need the voices of people we don’t necessarily or ever agree with. There are different audiences and different voices for them.

Earlier this year, the Inquirer published a report about the lack of diversity in its newsroom, which was described as “overwhelmingly white.” And the report concluded that the Inquirer’s coverage “underrepresents people of color.” Has management responded to this in any meaningful way?
Well, we now have lots of committees, that’s for sure. Many, many, many, many committees. And we’ve made some hires. But I’ve been through this here before. I was part of the original diversity committee years ago. So I’m skeptical. Are we having a reckoning? Yes. But we’ve had reckonings before. And some of the people leading this very reckoning are the people who co-signed the situations that we are trying to fix. So now we are supposed to believe they’ve seen the light? Why didn’t you believe us when we told you before that there was a problem with the culture in the newsroom? I hope you understand why we don’t totally believe this is going to work this time. We’ll see.

As the Inquirer’s only Latina columnist, do you feel you have the same opportunities and voice as your white male counterparts?
I fight really hard and at a risk personally and professionally to make sure I am heard. I make it very hard for you to ignore me. And this comes with turning people off — making people uncomfortable inside and outside of the newsroom. But I’m not here to make things easy or comfortable for you. I’m not here to pat you on the back in the newsroom and say, “Good effort.” Effort is great, but we are not where we need to be. My role as a woman of color is to make it not easy for people to do the bare minimum and think that’s great. Believe me, it would make my life so much easier if I could just accept the bare minimum. But that’s not why I’m here.

Published as “In Her Sights” in the July 2021 issue of Philadelphia magazine.