Gym's arrest in Harrisburg made headlines but accomplished nothing. Johnson should be doing more than holding anti-violence rallies. Activism may be what put them on the map, but I expect more than political theater from my elected officials. 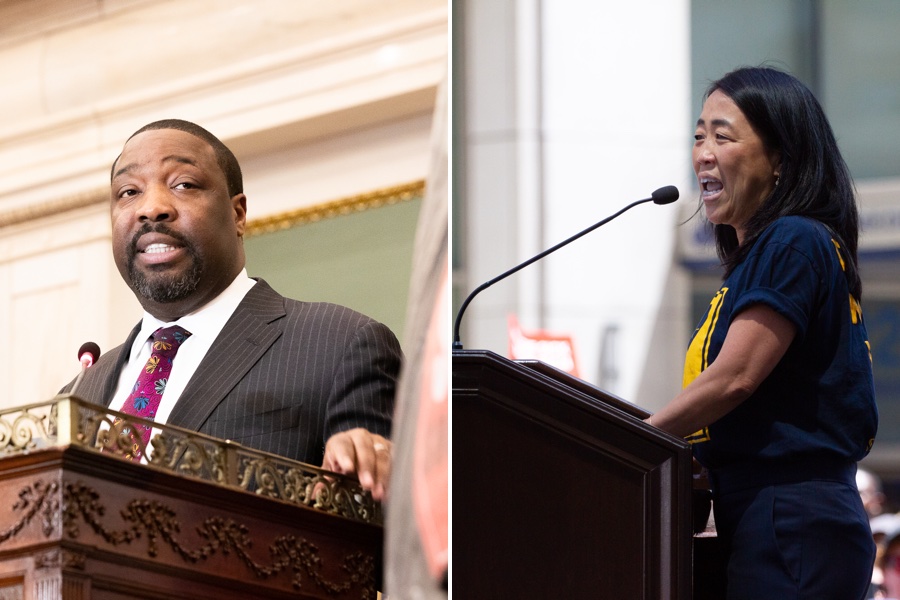 Having grown up in the South, I’ve never forgotten a piece of wisdom from my elders: “Know your role, play your part.”

In a democracy, we all have roles. As a journalist, I know that mine is to inform the public and provide context. Then there are activists and organizers who amplify the voices of the people and, along with the free press, speak truth to power. And there are politicians, those elected by the people, who are expected to heed their constituents’ calls and legislate accordingly.

That’s how it’s supposed to work. But lately, it seems some elected officials have forgotten to play their part.

There are two recent glaring examples of this from City Councilmembers. Last Wednesday, Councilmember-at-large Helen Gym made headlines (and, presumably, some campaign dollars) after she was arrested in Harrisburg at a protest to demand more public-school funding from the state’s surplus and federal relief windfall. Social media was ablaze with viral clips of Gym being detained by state Capitol police as she yelled, “Shame on Pennsylvania, shame on the unjust funding of our schoolkids, shame on this legislature for not standing up for our children.”

Yes, Gym’s points were valid. But is this the best an elected official who garnered more than 100,000 citywide votes in the last Council election cycle — and who has won national acclaim — can do with her power?

Gym’s campaign team then sent an email blast asking for donations. (Many political observers expect Gym to run for mayor in 2023.) The email included images from the arrest with captions like, “No elected official is working harder for us.” It’s hard to not cringe at swift requests for non-emergency money in the middle of a still-not-over pandemic. Even worse is that this performance of activism is being framed as “working harder” at a time when taxpayers would rather see more good policy be implemented and more bills passed.

What got buried in the headlines was how Gym’s presence upstaged POWER, the group of interfaith clergy activists who led the charge to protest at the state’s Capitol in the first place. The media fixated on the Councilmember who played activist for a day to garner campaign donations and press, rather than the clergy members who were arrested alongside her. Sadly but predictably, such staged acts of civil disobedience won’t do anything to change the minds of the Republican-controlled legislature in Harrisburg. This is why it’s hard not to view such acts by elected officials as anything other than than self-serving and counterproductive political theater. While Gym, a former public-school activist, is one of the fiercest advocates for education on City Council, having made the case for a more accountable school board and better environmental conditions for students/staff, her efforts should be expended in her own backyard, not exploited in Harrisburg.

Which is why it’s high time that politicians return to being legislators — and let activists, who are more strategic and principled when it comes to direct action, do what they do best.

The same goes for Councilmember Kenyatta Johnson, also a former activist, who this week had scheduled yet another “Peace Not Guns” rally to raise awareness of the city’s skyrocketing gun violence epidemic. If local residents, who don’t hold political power and sway, staged such an event, I wouldn’t roll my eyes. Community members, especially those in the most marginalized areas of the city, do more than their share to fight violence and make their concerns heard. But for an incumbent who is now in his third term to continue leading what should be activist-driven responses is underwhelming.

What Johnson should have done was stage a “call to action” for his demand of $100 million in new spending on gun violence prevention. Such a proposal was veto-proof in Council, with a 13-member majority, including Gym, ready to make it happen. Instead, Johnson and others didn’t push Kenney hard enough — and only got $68 million more in funding, much of which is just a repackaging of initiatives already funded in Kenney’s initial budget proposal. In the end, they got an additional $25.6 million in new gun violence prevention funding — nearly $75 million less than the goal trumpeted at press conferences.

I believe more funds could have been won for the community if the likes of Helen Gym, Kenyatta Johnson and others on Council had used their collective power to push the Mayor harder. What Gym did in Harrisburg was futile, since as a member of City Council, she has no say in the allocation of state education funding. Meantime, she could have been pushing on things she does have influence over, like gun violence funding in the city budget. Johnson could have used his years of experience on Council to build coalition and consensus around reshaping the budget. That’s the unique power legislators have. Why our progressive elected officials don’t flex it when they have the numbers to override a veto remains a mystery.

If politicians who won election based on their work as activists can’t transition to legislating, we need to start calling them out on it — and demanding better.