It took South Philly artist Ash Ryan just over a week — and 138 cans of spray paint — to pay tribute to the LGBTQ icon. 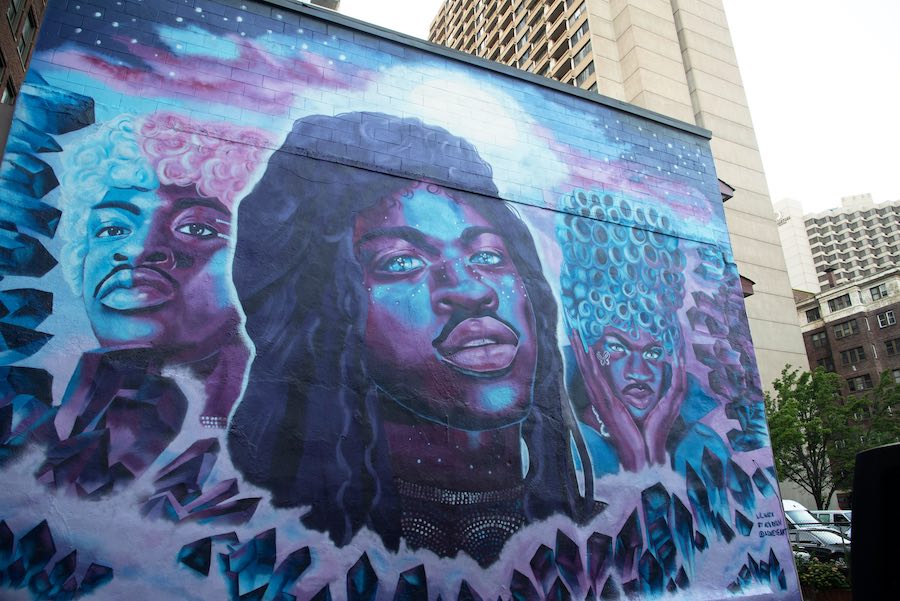 Lil Nas X is everywhere these days. His recent tweets, in which the LGBTQ music icon promised to have sex with “100 lucky fans” to celebrate Pride Month, have gone way viral. He joined the “great menswear skirt movement,” donning a plaid skirt for an interview with Jimmy Fallon. People are still talking about his positively over-the-top, pants-ripping Saturday Night Live performance. And now, there’s a Lil Nas X mural in Philadelphia.

Take a stroll over to the 1300 block of Cypress Street (it’s one of those small streets between Spruce and Pine) in the Gayborhood to see the brand-new Lil Nas X mural. The 36-by-36-foot mural appears on the side of the bar Writer’s Block Rehab, now in its fourth year. The mural is the work of South Philadelphia artist Ash Ryan, who was commissioned by the bar’s owner, Ram Krishnan.

“On the other side of the building, we have a mural of the great Harlem Renaissance leader Alain Locke,” Krishnan tells Philly Mag. “And we wanted something for the other side, somebody who is making their mark on Black, gay history now, 100 years after Alain Locke.”

As Krishnan was trying to figure out who to put on his wall, Philadelphia curator and blogger Conrad Benner of Streets Dept. floated the idea online of putting a Lil Nas X mural in the Gayborhood. This was just after Lil Nas X released the hugely popular (and hugely controversial) video for his song “Montero (Call Me by Your Name).”

“One of my friends who follows the Streets Dept. tagged me and said, ‘Hey, Ram, you need to get this on your wall,'” says Krishnan.

Then Ryan, the artist, entered the picture. 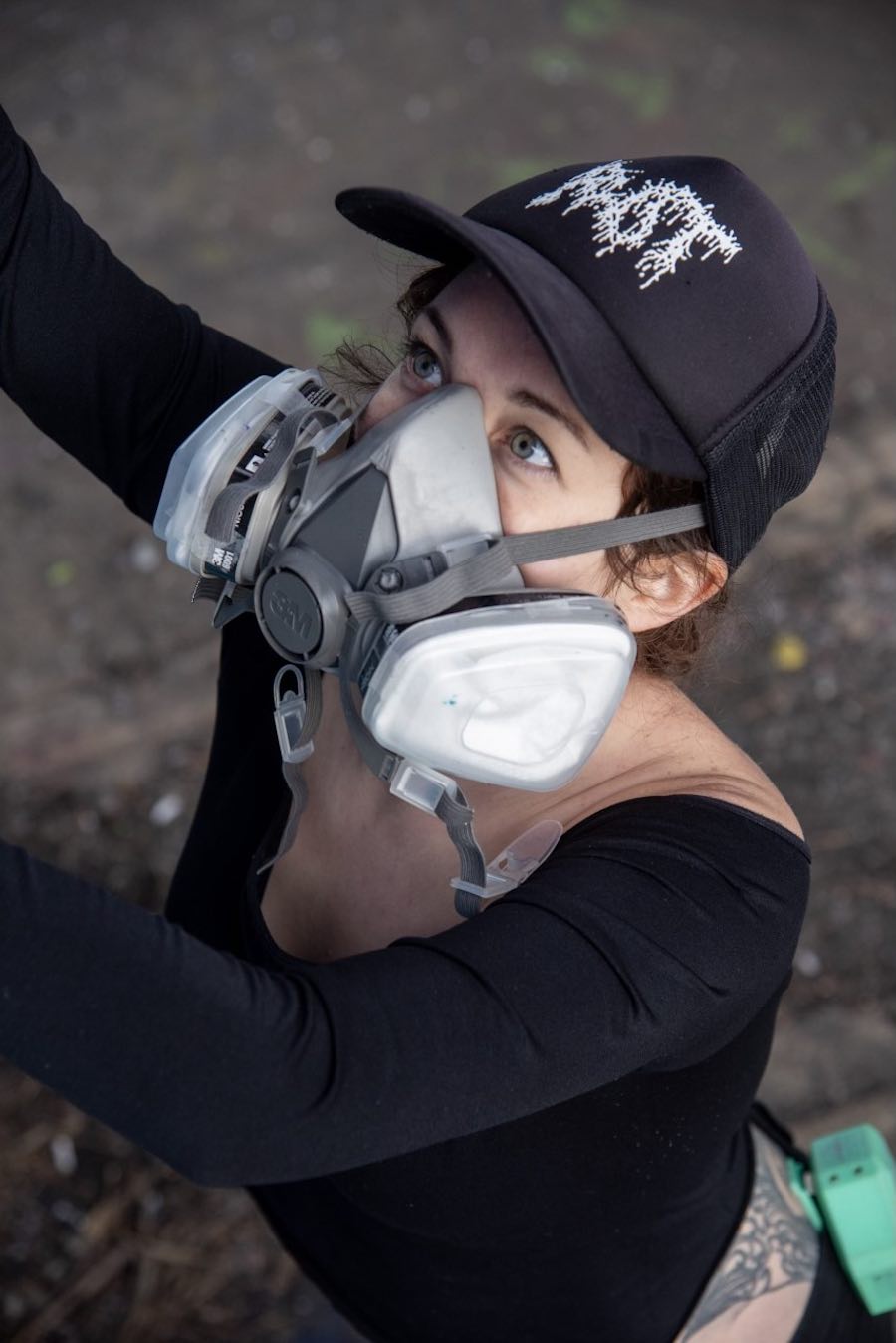 Now 29, the Coatesville native was heavily into painting and graffiti writing in her early 20s but got away from both to pursue a career in floral design for events. She lost that job thanks to — what else? — COVID. And she decided it was time to pursue her true passion of painting full-time.

She embarked on a privately commissioned mural of the 1940s Mexican actress Maria Félix in her neighborhood in South Philadelphia. She also applied for an internship with Philadelphia’s Mural Arts program but didn’t get it. When she heard about the Lil Nas X commission, she jumped at the chance.

“Initially, it was going to just be this small little thing,” explains Krishnan. “But then Ash was so taken by the wall that she said she was just going to paint the whole thing.”

Ryan based the mural on three of Lil Nas X’s characters in the “Montero” video. She added the clouds and crystals because she wanted Lil Nas X to look “heavenly, divine and spiritual,” as she puts it.

While many muralists do mockups of their murals on a computer before actually committing paint to a wall, Ryan didn’t. “I had it all in my head,” she says.

Krishnan funded the majority of the project, though Ryan did raise some money for materials on GoFundMe. Those materials included 138 cans of spray paint that she bought at Blick Art Materials on Chestnut Street.

A little over a week after she started, working around the cars that use the adjacent parking lot, Ryan finished her mural. While Lil Nas X is a sometimes polarizing figure in American culture, both Krishnan and Ryan say they’ve received nothing but positive feedback thus far. 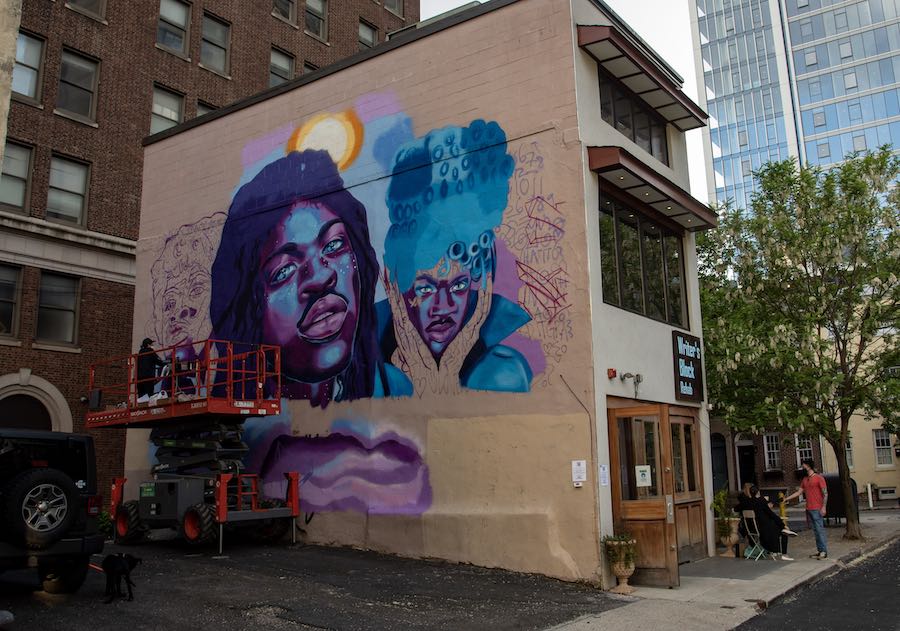 So what’s next for Ryan? She’s still hoping that Mural Arts will come through with an internship or other work for her. And in the meantime, she’s looking for new commissions.

“I’m available!” she says. “Trying to pay the bills. I want to paint murals for the community. Whatever the community wants. It makes me so, so happy to paint. Doing the Lil Nas X mural made me feel like a badass! Let’s do it again.”