A bar named Callahan’s. A retired machinist named Lammy. And a story that could only happen in Delaware County. 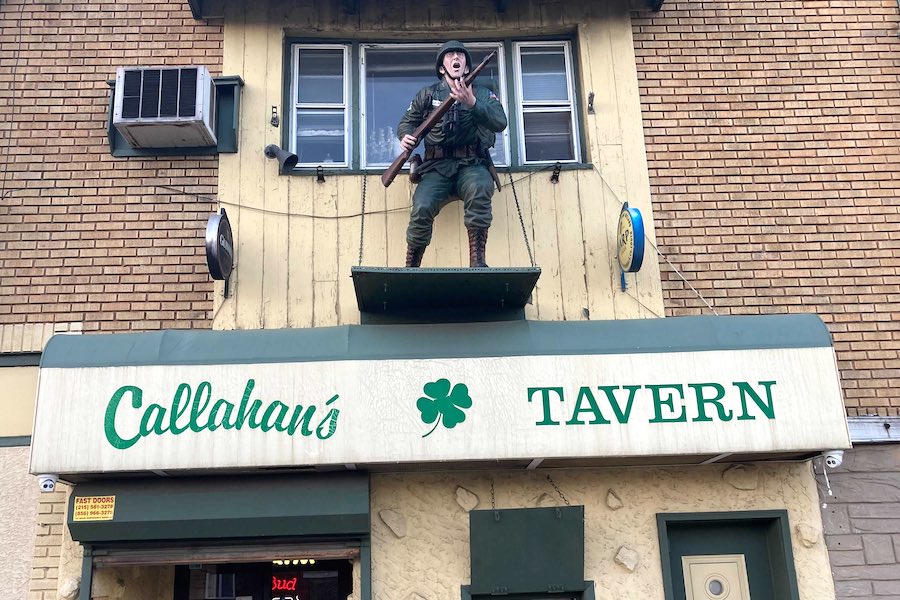 The Callahan’s Tavern soldier statue in Upper Darby in Delco

If you’ve had cause to drive down West Chester Pike in Upper Darby over the past two decades — maybe you had to get to the Blue Route; maybe you wanted to eat some fabulous pizza at Tina Fey’s favorite Delco restaurant — it would have been almost impossible for you to miss the large soldier statue perched above the busy thoroughfare between 69th Street and Route 1.

The soldier stood, rifle in hand, atop the awning of Callahan’s Tavern. Yes, the same storied Irish bar that inspired the recent comedic film Last Call. But then, one day, the statue was gone.

In the early hours of Christmas Day 2020, 70 mph winds caused damage all over the region. Trees came down. Power went out. Among the casualties of that gusty day: the Callahan’s soldier.

“An Upper Darby cop found him lying on the sidewalk on Christmas morning, all broken up in pieces,” says tavern owner Jack Callahan, himself a retired Delco police officer. “And he put it right into the back of my truck, because he knew exactly where it came from.”

Callahan purchased the soldier during the first half of 2001. He and his wife had a home at the Jersey Shore, and on the way back to Delco one afternoon, she wanted to stop at an antiques and furniture shop just off the Atlantic City Expressway. They walked in, and the solder immediately called out to Callahan.

“There were 12 Roman soldier statues — who knows what that was about? — and then my soldier next to them,” Callahan recalls. “I just knew I had to have him. I think I paid 300 bucks for it.”

When Callahan first brought the soldier to Upper Darby, he wasn’t quite sure what to do with it. So he just set it up in a corner of his bar, where it became a bit of a novelty. “People would try to stick cigarettes in his mouth and take pictures with him,” Callahan says with a chuckle. “They loved it.”

But then, the world changed. On September 11, 2001, as Callahan watched tragedy unfold 24 hours a day on cable news, he knew what he needed to do. So he and some local friends hoisted the soldier into its triumphant position over the road as a tribute to the country and those lost.

The soldier quickly became a landmark. People who had never been to the bar would come in and ask about it. Pedestrians would stop to take photos.

So when the soldier suddenly vanished last year, its absence didn’t go unnoticed. The phone began ringing with people wanting to know why Callahan had removed the statue, which of course he hadn’t. One local resident who walked in to find out what had happened wound up with tears in his eyes, the statue having had some special meaning for him.

Residents took to a Delco Facebook community group to share their thoughts about the loss of the solder.

“That’s so sad and a landmark hope he can get repaired and put back where he belongs,” wrote another.

In response to the community’s outcry, a friend of Callahan’s who’s a retired machinist and goes by the name of Lammy, offered to see what he could do to fix the statue. Lammy brought it to his house and got to work, reattaching parts that had broken off, rebuilding parts that couldn’t be salvaged, and giving the statue a fresh paint job.

Once Lammy finished, Callahan piled the statue in his pickup truck to bring him back to the bar where he belonged. But that trip didn’t exactly go according to plan. As Callahan was traveling down Haverford Road, the statue somehow popped out of the truck and onto the street. The damage was even worse this time.

“His head rolled across the goddamned road!” Callahan says. “Most of his fingers were broken. It was just a mess. A disaster.”

So Lammy got to work again, this time in a space next to Callahan’s so there would be no further transport fiascoes.

“He had to build new fingers from scratch,” says Callahan. “He really did an amazing job.”

Last week, Lammy finished his restoration and climbed a ladder to secure the soldier to its former position of relative glory: 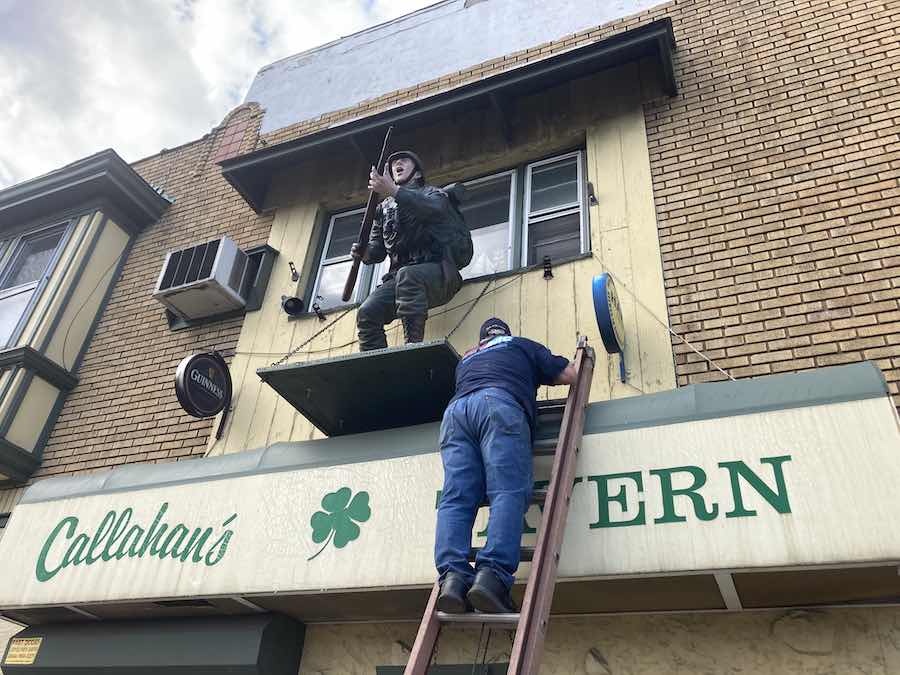 “Lammy” returns the restored soldier statue to the front of Callahan’s Tavern in Upper Darby.

Callahan tells Philly Mag it was important to him to get the statue up before the 20th anniversary of 9/11. He hopes to have a rededication this Memorial Day, complete with a military band.

And this time, says Lammy, “That soldier will last forever.”