Philly’s New Snowplow App Is Live, So You Can See Exactly Which Streets Have Been Treated

Just in time for the snowstorm, PlowPHL is here. 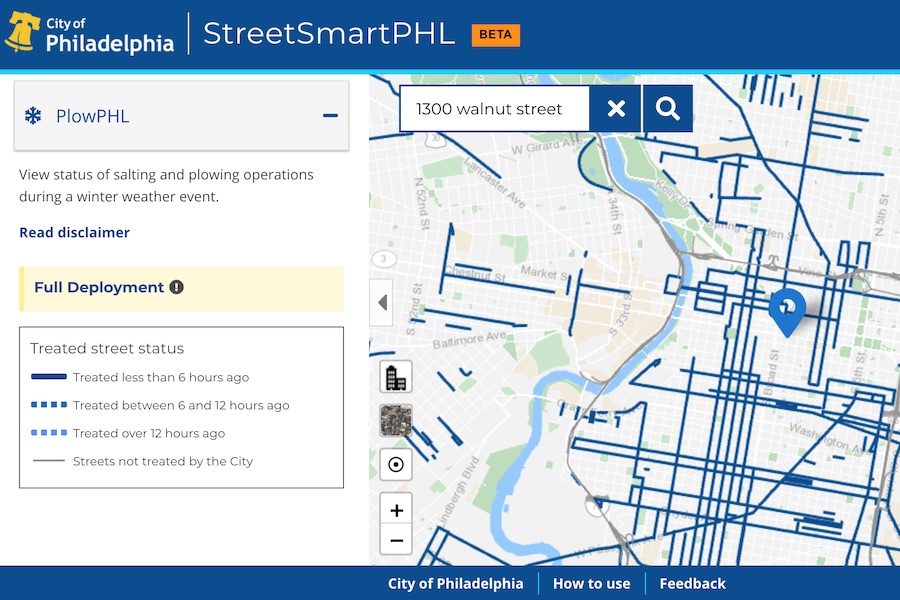 A screenshot of PlowPHL, the new Philadelphia snowplow-tracking app. (Image via City of Philadelphia)

With a significant snowstorm upon us, the city has finally debuted PlowPHL, a Philadelphia snowplow-tracking app that has been in development for more than two years.

We first told you about PlowPHL a few weeks ago, when the city was using the February 1st snowstorm to test out a beta version of the app.

A streets department spokesperson had told us that part of the delay in launching PlowPHL was simply a lack of snow in Philadelphia (keep in mind we got a meager third of an inch last winter), which meant a lack of testing opportunities. But this winter is different.

The idea of PlowPHL is simple enough: You type in an address on the PlowPHL screen and then the app shows you the status of the streets around that address. You can zoom in and zoom out. The app is set up to differentiate between streets treated within the past six hours, streets treated between six and twelve hours ago, streets last treated more than twelve hours ago, and streets not treated at all. The streets department says there’s about a 15-minute delay between the snowplow plowing a street and the app updating the plow’s data.

So when a snowplow that is supposed to go from 2nd and Walnut streets to 13th and Walnut streets does just that, the streets department’s system records that street as treated, taking it on faith that the plow itself was actually down and clearing the street. Streets department commissioner Carlton Williams says he’s working on a way that the city can detect whether the plow is actually up or down as it travels on a street.

We checked PlowPHL repeatedly in the early morning hours as snow continued to fall and saw as streets changed colors indicating they had been treated.

“The recent back-to-back snow events demonstrates how winter weather can be unpredictable,” Mayor Jim Kenney said in a statement on Wednesday. “With PlowPHL residents now have near real-time access to track how the city responds and treats roadways during any type of snow event. This new tool further demonstrates our administration’s commitment to transparency and accountability in city services.”

Note that some major Philadelphia roadways, including City Avenue, I-676 and I-76, are not included in PlowPHL’s results. Those roads are the responsibility of PennDOT, which doesn’t have an app.