Kenney Must Do More Than “Acknowledge” Philly’s Gun-Violence Emergency

In a clumsy bit of political theater, the Mayor danced around Philadelphia’s current existential crisis. It’s an insult to Jamal Johnson, the man whose hunger strike made the city pay attention. 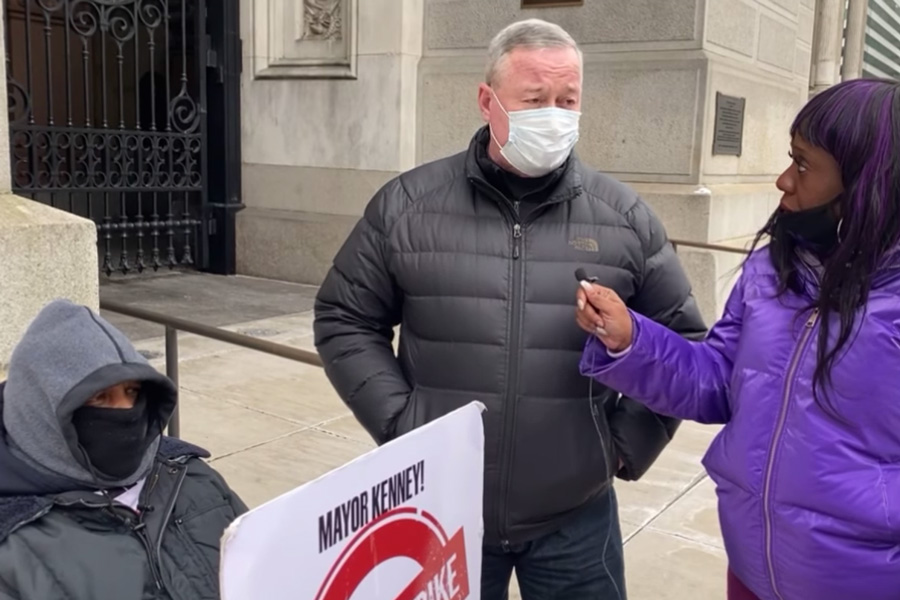 A lot was made of Mayor Jim Kenney’s meeting with anti-gun-violence hunger striker Jamal Johnson this past Friday, and I’m still wondering why.

The scene played out in a corny political news segment captured on cell-phone video and posted to social media: Standing in the cold at City Hall with Sajda “Purple Queen” Blackwell, an independent radio personality, Kenney awkwardly told Johnson he would acknowledge a City Council resolution on gun violence and promised to work on the measures it set forth. Wearing a black North Face jacket and jeans, Kenney looked more like a grumpy dad than a city official. He seemed uncomfortable, with his scripted, deer-in-headlights demeanor, as the camera rolled man-on-the-street-style alongside Johnson and host Blackwell, who is related to former City Councilmember Jannie Blackwell and was dressed in all purple.

“I want to pledge to work to do what we can to fulfill the resolution and to get this violence under control,” Kenney said during the exchange, which was framed by some in the press as a “truce” between him and Johnson. “We’ll try to implement what’s in this resolution as much as we can.”

That’s it? Johnson, a Marine veteran, went on a 26-day hunger strike to demand action on gun violence, and all he gets is “We’ll try”?

For Kenney to merely “acknowledge” a non-binding resolution is beyond toothless in a town that has elevated toothless gun-violence gestures to an art form. The city has already held hearings, issued reports, called ceasefires, and convened press conferences. These efforts end just like they start: a pledge to do better, followed by performative thoughts and prayers.

The resolution in question, sponsored by Councilmember Jamie Gauthier back in August 2020, implores the city to treat gun violence with the same level of urgency it has shown regarding COVID-19. It calls for more meetings and updates and citywide coordination of the departments working to combat the epidemic. Essentially, it’s a call for what should already be happening. What makes the requests for such transparency in this resolution different from current failings is that Gauthier is calling for more coordinated and concrete timelines of action, compared to the spontaneous political theater we’re witnessing right now. This resolution isn’t calling for the Mayor to declare a “state of emergency,” as Kenney misleadingly implied in the press.

But why not declare a state of emergency? Such a declaration would force the city to immediately confront gun violence as the crisis it currently is, rather than continue to treat it as a symptom of some unknowable cancer.

“I don’t want to lock down the entire city, or people to have a curfew. I don’t want people to not be able to congregate if they congregate peacefully,” Kenney told the press. “These are things the state of emergency can have an impact on.”

So Kenney has suddenly rediscovered his social justice lens after having lost it last summer, when he allowed the tear-gassing of innocent protesters? The Mayor is now concerned about over-policing? Does this mean Kenney is admitting that our city’s officers, led by the flawed police commissioner he continues to defend, are likely to abuse their power and not protect Philadelphians?

The Mayor’s spontaneous moral conscience is too good to be true because it’s not. Kenney’s not concerned about social justice, because as our homicide numbers continue to skyrocket, he has yet to invest serious money and resources to combat gun violence. Instead, we get excuses, remorse, and, yes, acknowledgements of these senseless murders from a leader who is too afraid to empower other city departments outside of his administration to confront this crisis.

Although a state of emergency would unfortunately only further empower the police, it would also, and more importantly, allow other city departments and agencies to confront the rising homicide rate without the need for Kenney to approve every single decision. Right now, progress is stalled because the Mayor hasn’t granted authority to other institutions to intervene when he drops the ball. A state of emergency would immediately provide such departments and agencies with more money and power to bolster the city’s overall response beyond the Mayor’s actions. In other words, Philadelphia would finally have all hands on deck to address an epidemic that desperately needs them.

Last year, nearly 500 Philadelphians were killed with guns, and more than 2,200 were shot. We are less than two months into a new year, and more than 60 people have been killed with guns in the City of Brotherly Love and Sisterly Affection — a 45 percent increase compared to 2020. Anything less than a state of emergency at this moment is just lip service.

I fear that 2021 could be Philly’s deadliest year — not just because of the pandemic and poverty, but because all our Mayor can do is “acknowledge” the problem.