Health commissioner Tom Farley says he expects Phase 1B vaccinations to conclude in April, Phase 1C to end in May, and for everyone else to be vaccinated by the end of July. 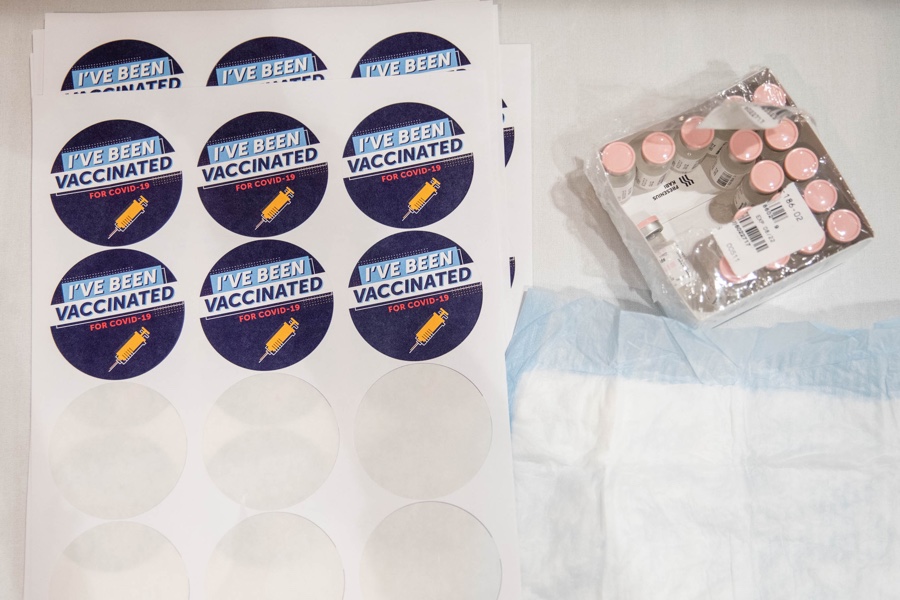 After sharing a very tentative COVID vaccine timeline, the city health department now has a better idea of when you might get a sticker like this one. (Photo by Gabrielle Audi/AFP via Getty Images)

The experts have been saying for a few weeks now that COVID-19 trends for Philadelphia look good. The latest computer models predicted declines in cases, and true to form, this past week in Philly saw the average daily case count drop to 242, down from 323 the week before. Deaths also fell from 92 per week at the beginning of January to 37 per week by the month’s end. See? Good news.

Until now, though, there hasn’t been much in the way of official forward-looking predictions about vaccinations and the pressing question on everyone’s mind: When can I finally get the jab? This week, health commissioner Tom Farley gave the first hint that he was willing to engage in a little bit of speculation. “I can estimate that we will be in Phase 1B until approximately the end of April, and in Phase 1C until approximately the end of May,” he said at his weekly press conference. At that point, anyone would be eligible to get the vaccine, and Farley estimates the city “would reach everyone who wants the vaccine by the end of July.” (More than 150,000 people have received first doses so far, and last week, there were more than 44,000 shots — first and second doses — administered in Philly.)

Farley’s willingness to suggest a timeline stems in part from the news that the federal government just made another large vaccine purchase. If all goes to plan, the government will have received a total of 600 million doses by the end of July — enough to inoculate the vast majority of the U.S. adult population. And that’s not even counting the Johnson & Johnson vaccine, which could be approved by the FDA by the end of the month.

The 600 million dose figure obviously doesn’t account for exactly when Philly would begin to see an increase in its current weekly allocation of 31,200 doses, nor does it answer the question of how many Philadelphians actually want the vaccine, or how quickly the city can scale up its vaccine administration to meet that demand. But we should all feel good about the fact that any grand-pronouncement-averse public official such as Farley feels comfortable enough to float a timeline, however tentative it may be. (After suggesting that schedule, Farley did immediately add, “Don’t hold me to this because there is so much unknown here.”)

The city’s occasionally byzantine vaccine sign-up process has also started to become slightly more clear over the weeks. Hospitals have begun to invite patients with high-risk health conditions and those who are over 75 to make appointments on site. According to Farley, Penn has sent 28,000 invites so far, Temple has sent 21,000, and Jefferson has sent 48,000. All told, about one in four people who receive invitations are actually making appointments to receive vaccine, Farley said.

In addition to hospital efforts, the health department has been sending out invitations to eligible people on the city’s vaccine interest site and says it should reach everyone over the age of 75 by the end of the week. That doesn’t necessarily guarantee an appointment — demand still far outstrips supply for that — but it does give people information on how to sign up for a shot at a pharmacy, or possibly one of the city-run mass clinics to begin next week.

Speaking of clinics: Farley suggests that the health department is interested in maintaining the Convention Center as a mass vaccination site in the future, arguing it’s superior to the stadiums — which members of City Council have repeatedly floated as another possible mass clinic setting  — because it’s centrally located and less likely to attract people from outside the city.

For the first months of vaccinations, the constant refrain from the health department was that if only it had more doses, more people would be vaccinated. Now that more doses are slowly starting to arrive, the messaging is finally starting to change. “The limiting factor now,” Farley says, “is shifting from how many doses come into the city to how quickly we can deliver those doses.”