The embattled police commissioner has doubled down on the controversial use of tear gas on innocent Black Lives Matter protesters. Why are some Black leaders now standing by her? 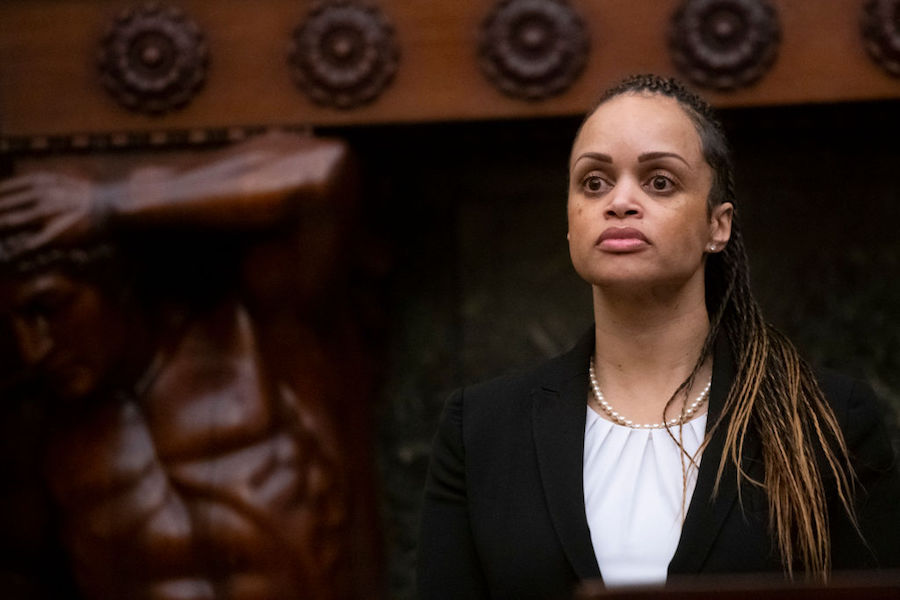 Right now, I can’t get the words of legendary Black writer and Harlem Renaissance fixture Zora Neale Hurston out of my head: “All my skinfolk ain’t kinfolk.”

This quote is often used by Black people to remind ourselves that racial identity doesn’t automatically mean solidarity. As a Black man, I have denounced other Black men I felt were no longer “kinfolk” — such as regressive Supreme Court Justice Clarence Thomas, disgraced former Philly DA Seth Williams, and even Trump-loving sycophants like rappers Kanye West and Lil Wayne. There’s no “kinship” for Black people who actively suppress the freedoms, dignity and rights of those within our community; racial connection begone at that point.

Which is why it’s very hard for me to fathom why anyone Black in Philadelphia who claims to care for Black Lives Matter and racial justice would defend the continued employment of Philadelphia Police Commissioner Danielle Outlaw. After a damning recent report by the City Controller’s office that explained how deliberate and ambitious Outlaw was in tear-gassing Black Lives Matter protesters, I called for both her and Mayor Jim Kenney to immediately resign — for a second time.

There’s no way a city that considers itself the birthplace of American democracy can live up to that legacy if our leaders are violating the human rights of its citizens. But this is also a city where deflection and excuses reign supreme. And there are some Black leaders who have chosen to deploy identity politics to shield Outlaw from true accountability. People have tried to make the case that Outlaw deserves a “second chance” based solely on her identity as a Black woman.

“I find myself thinking about how women are judged more harshly — especially Black women — when I encounter folks talking about how Philadelphia Police Commissioner Danielle Outlaw should resign over missteps made during last summer’s riots and unrest,” Inquirer columnist Jenice Armstrong argued in a recent op-ed defending Outlaw. Instead, Armstrong said, “It’s time for the city to move forward. And like the many males who preceded her as the city’s top cop, Outlaw deserves a chance to continue growing in the role.”

These appeals to race and gender reveal exactly how identity politics can be misused to deflect and distract and deter people of power from being held accountable.

In the Philadelphia Tribune, Black community advocates used similar language to defend Outlaw, the first Black woman appointed as the city’s police commissioner. “So often, my experience has been with leaders in law enforcement an unwillingness to even admit a tactic failed or it was the wrong tactic to use, and so I think that is something we can build upon,” said Mark Tyler, pastor of Mother Bethel AME Church. “I am interested in seeing her have the opportunity to implement some of the things that I know from her past that are important to her in the sense of [police] reforms.”

“Blaming a new, Black female commissioner for Philadelphia’s history of notorious police brutality is like blaming a lesion for the cancer,” civil rights attorney Michael Coard said in the same article. “It’s the cancer that causes the lesion.”

Given the often radical and pro-Black messaging that Coard and Tyler have promoted in their activism, they wouldn’t be saying the same thing if our current police commissioner were white. When Outlaw, who had an already troubled history of tear-gassing protesters in her previous job, decided to do it again in Philadelphia, it was clear she valued her power over the people, retaliation over race, compromise over community.

Look at the backflips Inquirer columnist Solomon Jones went through to make excuses for Outlaw. He compared her circumstances to those of the city’s health commissioner, Tom Farley, who’s under fire for a citywide COVID-19 testing and vaccination scandal.

“To be sure, both Farley and Outlaw must answer for their mistakes, but if Farley is allowed to stumble while dealing with an unprecedented crisis and have time to get his footing, Outlaw should be afforded that same opportunity,”  said Jones, noting how “unfair” it is for Outlaw to be held to the “twice as good” standard as a Black leader.

This is a classic case of “whataboutism“: defending bad behavior by comparing it to other bad behavior that went unpunished. It doesn’t so much defend those in question as suggest that if others got away with it, so should they. (Never mind that Farley didn’t make the direct decision to hire Philly Fighting COVID, the bratty group that blew the city’s vaccination rollout — his deputy health director, who later resigned, did. In comparison, Outlaw approved the use of tear gas in Black communities.)

It’s upsetting that in a city that’s majority Black and brown, and at a time when we need better leadership across all racial lines, our diverse leaders will stand up for Outlaw’s incompetence —  especially when they’ve previously criticized a lack of police accountability.

Outlaw didn’t make a mistake; she made a choice — one that she continues to stand behind even in the wake of the report.

Critics like me aren’t telling Outlaw she should resign because she’s a Black woman, but because as one of the most powerful city officials, she failed to protect and serve innocent civilians. To conflate her race and gender with questions about her ability to do the job is to gaslight fair criticism.

As leaders on social media continue to back Outlaw based on her Black elite affiliations and networks — she’s a member of Alpha Kappa Alpha Sorority, Inc. and The Link, Inc., whose local leaders have defended her based on her race, gender, and connection to their organizations — hundreds of Black and brown families continue to be devastated by her reckless decisions.

I am left wondering what her fellow sorors and links would do if their Black children were tear-gassed and shot with rubber bullets for constitutionally expressing their right to free speech. For these local leaders to back Outlaw based on her identity alone is to give in to the normalcy of state-sanctioned violence that continues to oppress us all.