The city is getting ready to debut PlowPHL, a snowplow-tracking app. 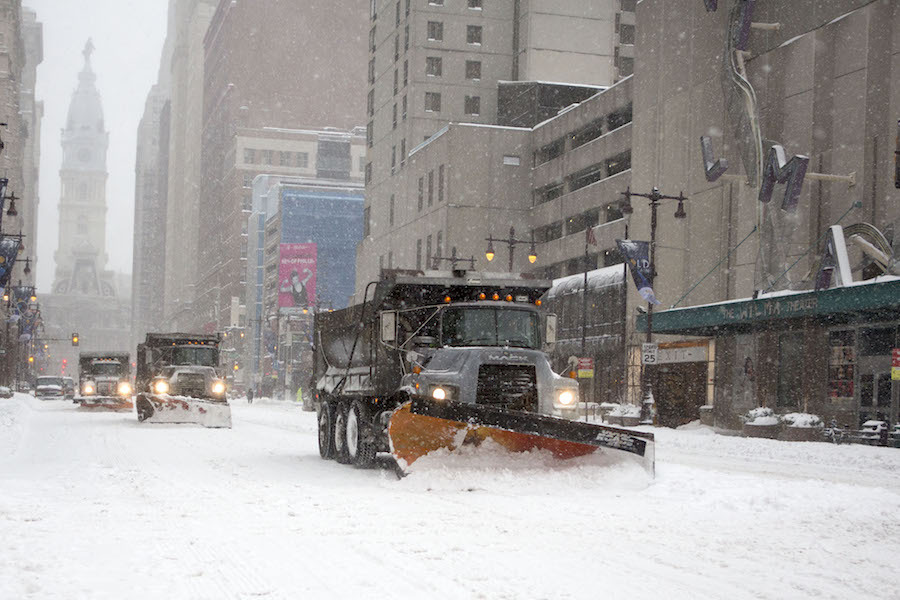 You’ll soon be able to see the progress of Philadelphia snowplows like these through PlowPHL, an upcoming city snowplow-tracking app. (Getty Images)

Hooray! There’s actually a significant amount of snow in Philadelphia. This means my kids get a real live snow day. But it also means something more important in the grand scheme of things: City officials have a chance to test out PlowPHL, an upcoming Philadelphia snowplow-tracking app.

PlowPHL has actually been in the works for about two years. But the Streets Department — that’s the city agency responsible for all things snow-related — needed a couple of trial runs before it could make PlowPHL public. And last winter wasn’t exactly helpful in that regard, with the skies spitting out an insulting three-tenths of an inch of snow over the entire season.

Then, on December 16th, 2020 — technically before winter even began — the Philly area got just over six inches of snow, the most snow in one day since March of 2018. As the Streets Department deployed its snowplows, officials and technicians followed the plowing activities with a behind-the-scenes version of PlowPHL — and they allowed Philly Mag to take a peek at the same time.

Here’s how it works: When you load PlowPHL, you’ll see a map of the entire city. You can zoom in on different neighborhoods to see who’s getting plowed and who isn’t. You can also type in an address. And you need to keep in mind that Streets Department policy stipulates certain snow thresholds that need to be crossed before they’ll deploy a plow to your block — i.e., they probably aren’t going to plow your impossibly narrow block in South Philly if there are two inches of snow on it.

The app works by comparing a planned route for a given plow with real-time GPS data received from that plow. As a hypothetical example, when the Streets Department sends Plow X out, it knows that Plow X is supposed to plow from 30th and Walnut streets to 63rd and Walnut streets. So when Plow X’s GPS device tells the Streets Department’s system that Plow X just went from 42nd to 43rd on Walnut, PlowPHL shows that block as having been treated.

Using the planned route for comparison means that when Plow X decides to take a detour so the driver can pick up a quick bite of lunch off-route, PlowPHL doesn’t think the driver just plowed that off-route street. “We’ve been very successful at preventing false positives,” insists Streets Department commissioner Carlton Williams.

During the live overview after the December snowstorm, we were able to drill down on any given point on the map to see exactly what time the plow went down the street as well when during the previous 12 hours a plow had treated that block. Williams notes that the final version will probably just show the most recent instance. “I think what the resident really wants to see is the last time their block was treated,” he observes, “not what happened 10 hours before that.”

PlowPHL certainly isn’t without its limitations. As of right now, it can’t differentiate between a plow that just plowed your block, a plow that just salted your block, and a plow that did both, though Williams hopes to figure that out for a future version. Plus, the GPS devices aren’t infallible, and when communication breaks down between that device and the Streets Department, PlowPHL assumes no plowing got done.

PlowPHL also doesn’t show you whether some of the biggest roads in the region, such as I-676, I-76 and City Avenue, have been treated, because those roadways fall under the domain of PennDOT and not the Streets Department, and there’s no integration between the two.

The day after December’s snow event, Commissioner Williams told us the department did identify some issues with PlowPHL but that overall, he considered the test to be a success.

“It was a good preview,” said Williams. “It might take one more event before we can go live. I need one more run-through.”

Now that the Streets Department is being treated to one more run-through — and a bigger storm, with a longer duration to boot — we checked in to see whether PlowPHL will be accessible to the general public soon.

“We do hope to make this available to the public in time for the next storm,” a Streets Department spokesperson told us on Monday morning, as snow was blanketing the city.