13 Winners and Losers From the 2020 General Election

You know Joe Biden is a winner and Donald Trump's a loser. But the election had ripple effects far beyond the top of the ballot. Here's who came out on top — and who didn't. 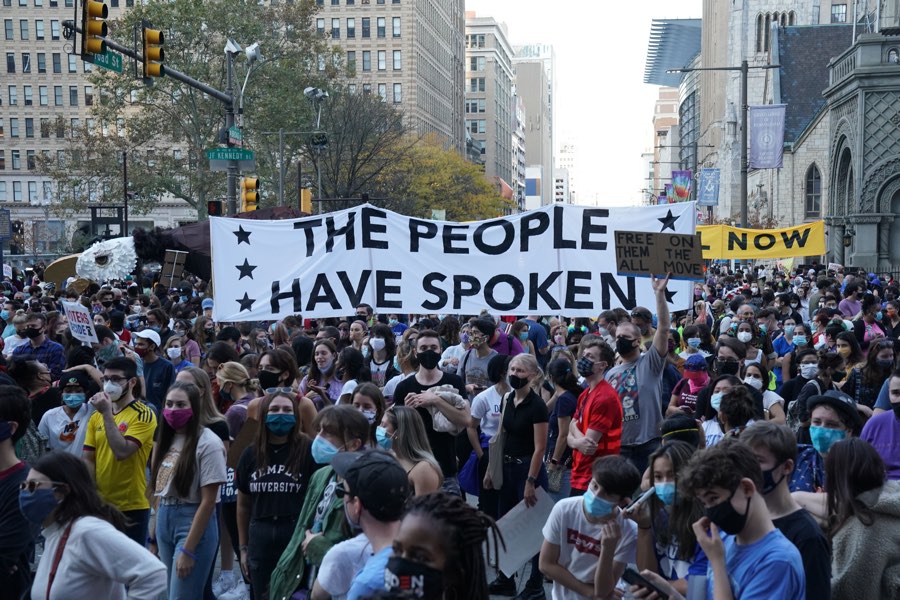 Philadelphians celebrating the Pennsylvania election results and Joe Biden’s victory on Saturday. But don’t forget: There were other winners and losers, too. Photo by Bryan R. Smith/AFP via Getty Images)

Duh. But since the Republican Party (not just Trump anymore) keeps suggesting otherwise, we want to re-emphasize that yes, Joe Biden has won. And no, there is no evidence of fraud from mail-in ballots, which is why the Trump administration hasn’t prevailed, in any meaningful way, in any of the lawsuits it brought in the aftermath of the election.

2. The City of Philadelphia

For a few years now, Philly has been one of those “it” cities that get fawning coverage from the national press. Multiple publications put us on their lists of must-visit cities. GQ magazine named us the city of the year in 2018. You get the gist.

Last week, Philly was thrust into the national spotlight yet again as Pennsylvania looked to be the tipping-point state in the election, and Philadelphia looked to be the place whose votes would put Biden in the lead. It was, easily, the most political attention the city has received since the 2016 Democratic National Convention. And we more than held our own. As the vote count dragged on into a third and fourth day, a group of activists set up a block party outside the Convention Center to cheer on the process (while also drowning out a small assemblage of pro-Trump protesters). There were dancing mailboxes, free tacos and Gritty costumes. And the next day, it happened all over again. The next day, when the media called the race for Biden, more impromptu celebrations sparked in neighborhoods across the city. The result: a new set of laudatory articles from the press.

This year has been the bane of spontaneity. Stuck in our homes, waiting out the pandemic, it’s been difficult to feel the pulse of the city. The only exceptions have come from moments of tragedy — protests in the aftermath of police killings. That the city came together, even briefly, to celebrate something good, finally, was intoxicating.

3. The Future of Philadelphia

If Philly was a winner for its reaction to Biden’s victory, it also stands to be a winner in the months to come. For one, the city will no longer have an antagonistic opponent in the White House. (Recall how Trump unsuccessfully tried to withhold federal funding to Philly because of its sanctuary city policy?) And Biden has made Philly a pillar of his campaign; when he announced his run for president, he did so on the Parkway, with City Hall looming behind him. He set up his national campaign headquarters here, too. Biden has said he plans massive spending projects to boost the economy, including funds for infrastructure. That could be a boon for SEPTA, which has some massive plans of its own (like trolley revitalization) but is facing a financial crush from the pandemic. If Biden manages to enact some of his legislative agenda, Philly should benefit.

Our lieutenant governor wasn’t even on the ballot this year, yet he still emerged as a winner. With the national media’s attention trained on Pennsylvania, Fetterman stepped up his Twitter game and delivered a series of zingers to the press — “The President can sue a ham sandwich. He can send 1,000 lawyers to Pennsylvania, it’s not going to change,” he told George Stephanopoulos on Good Morning America — earning plaudits along the way. Fetterman is a bit like an exotic zoo creature in that no one can quite believe that this burly, goateed dude is a politician. Fetterman, whom we profiled a few years back, uses this to his advantage: In his Stephanopoulos interview, he wore a fluorescent green turtleneck and a Carhartt jacket, parlaying the election-related attention on Pennsylvania into attention on him. That will serve him very well if he wants to try to succeed his current boss in Harrisburg or snag Pat Toomey’s Senate seat in 2022, as virtually everyone suspects he does.

Speaking of people rumored to have an interest in higher office in two years, Josh Shapiro, who won his race for attorney general, is on pace to be the candidate who receives the most votes in Pennsylvania in 2020 — Biden included. Keeping in mind the usual caveat that not all votes are counted, that Shapiro may end up running ahead of the president-elect in a race where almost every other Democrat across the country ran behind him speaks volumes about Shapiro’s statewide appeal. Don’t expect the whispers about Shapiro’s ambition — either for the governor’s office or that Toomey Senate seat — to get any quieter after this showing.

Bravo to the commissioners, an occasionally maligned group of bureaucrats (remember the whole controversy over the city’s new voting machines last year?) who managed to put on a vote-counting performance over the past week that was nothing short of virtuosic. They were fast (all things considered). They were transparent. They were accurate. They gave national press conferences bursting with delightful Philly accents and an undercurrent of disdain that they should be forced to defend their vote-counting process in the first place. Republican city commissioner Al Schmidt was on 60 Minutes, debunking lies from his own party about voter fraud. (He also reported that the commissioners have been receiving death threats.) This was a dangerous time to be in the business of counting votes — any mistake would have been magnified many times over. The last ballots are still being tallied, but we feel comfortable concluding: The commissioners passed with flying colors.

Aside from the presidency, Republicans should be happy with the results of the election. Democrats had made much of their efforts to flip the state legislature in Harrisburg, which would have had huge implications for redistricting next year. Instead, they appear to be on track to lose seats in both chambers. In the statewide races, Republican auditor general candidate Tim DeFoor defeated Democrat Nina Ahmad, and Stacy Garrity beat Democratic treasurer Joe Torsella. (That race remains uncalled, but Torsella has conceded and currently trails by more than 75,000 votes.)

One conclusion to draw: The vote against Trump this year seems to have been just that: a vote against Trump — not against the Republican Party writ large. This is still a swing state. And there’s no reason to expect that a Democrat is going to waltz into the Senate or the governor’s mansion in 2022.

Lots of people had big plans for state treasurer Joe Torsella, not least of them Joe Torsella. The former candidate for Congress and the Senate has never really shot down the idea that he might run for higher office again. But first, he was meant to win reelection to his position as treasurer. Instead, he has lost. Torsella may still try to run for a different office — after all, the dude’s out of a job now — but this was a reality check. And a warning sign for voters and the Democratic Party, who now see in Torsella someone who has lost two statewide contests, not to mention one for the House of Representatives in 2004.

Same story as with Torsella. DePasquale has been similarly rumored for higher office in 2022. After a two-term stint as auditor general that will end in January, DePasquale could have lain low for a few months before launching a statewide campaign. Instead, he chose to run for Congress in the newly drawn 1oth District, which covers York, Dauphin and Cumberland counties, against incumbent Scott Perry. And he lost. Worse: It wasn’t particularly close. As of this writing, DePasquale is down by seven points, which doesn’t exactly inspire confidence that he’s moving on to bigger things next time around.

3. All Other Down-Ballot Dems

The truth is, this was a bad election for almost every Democrat not named Joe Biden or Josh Shapiro. Unlike in 2018, there was no blue wave. In fact, if anything, the blue tide moved out. Democrats lost the offices of auditor general and state treasurer. We just covered DePasquale’s defeat. In the state House, Democrats may actually lose seats, even after Cook Political Report rated the Democrats’ chance of flipping the chamber a “toss-up.” The party is on pace to lose seats in the state Senate, too. There, Democrats had targeted four seats they thought especially vulnerable; they flipped just one.

Maybe the most disappointing result for Democrats came in the 1st Congressional District, where Christina Finello was up against Republican incumbent Brian Fitzpatrick. In 2018, Fitzpatrick was the only Republican Congressman to withstand the Democratic gains in the Philly suburbs. One might have expected him to finally go down this time around, especially considering Joe Biden’s strength in the suburbs this year. But Fitzpatrick still won.

It’s true that in most of the Philly suburbs, statewide Democratic candidates outperformed their opponents. But those same candidates (Shapiro excluded) ran behind Biden, and if the Democratic Party was starting to feel confident that it had cemented control of those suburbs, Fitzpatrick’s victory, along with some of the other state legislature defeats, complicates the narrative.

4. Those Hoping for a Non-Gerrymandered Pennsylvania

One of the reasons Democrats fought so hard for control of the state legislature this year: 2021 will be a critical year for shaping the political future of the state. That’s when the redistricting process — the art of redrawing state and federal boundaries for political districts — gets under way again. If you recall, the last time Republicans tried this, they came up with such a blatantly unfair system for Congress that the state Supreme Court declared it unconstitutional. If Democrats had control of at least one branch of state government, they could have more of a say in the federal redistricting process. Now they’ll be relegated to the sidelines yet again. The only good news: Unlike in 2011, there’s a Democratic governor in office who can veto any overly gerrymandered Congressional maps.

This is the part where we mention that President Trump still hasn’t accepted the results of the election and is filing spurious lawsuits that ultimately won’t change the results.

We expected the President to behave like this. More concerning is the fact that as of Tuesday, only four Republican senators have even acknowledged Biden’s victory. Mitch McConnell isn’t one of them.

Taking cues from the top, a group of Pennsylvania Republicans, including House Speaker Bryan Cutler, sent a letter to Governor Tom Wolf last week insisting that the state perform an audit of the election before any results are certified. Again, there’s no evidence whatsoever of any vote fraud, and one of the claims in the letter — that Republicans weren’t allowed to watch over the ballot-counting process — was directly contradicted by the Trump campaign’s own lawyers.

And on Sunday, the Washington Post reported that the General Services Administration, a little-known government entity that’s in charge of releasing some $10 million in federal funds to help the president-elect’s transition team begin, you know, transitioning, has refused to do so, claiming that the election isn’t decided yet.

It was nice to have one day of political good news on Saturday. We should have known it wouldn’t last.