As Biden Pulls Ahead, Philadelphia Celebrates 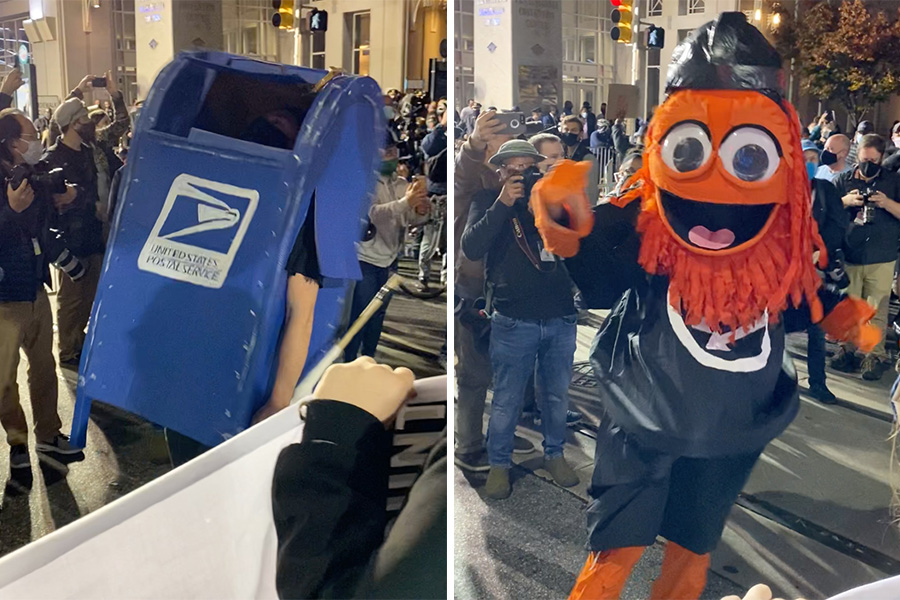 This morning, just before 9 a.m., votes for Joe Biden outpaced those for Donald Trump in the Commonwealth of Pennsylvania. Before the latest tallies were released in Philadelphia, Delaware and Bucks counties this morning, the former vice president trailed by more than 18,000 votes. As of 12:30 pm, Biden leads the state by 9,746 votes.

As the state and its 20 electoral votes flipped to pale blue on the electoral map, indicating a Democratic lead, Philadelphians celebrated. The Inquirer’s Ellie Rushing captured a dance party on the streets of West Philadelphia:

West Philly reacts to Biden’s lead in Pennsylvania by dancing in the street, of course pic.twitter.com/WBuipfLydN

philly, you did it. pic.twitter.com/DzplGDBMOH

The Daily Pennsylvanian’s Kylie Cooper captured the scene outside the Convention Center, where election workers continue to count every ballot.

Philly has come out for another dance party at the Convention Center as Joe Biden has pulled ahead of Trump in PA votes. pic.twitter.com/0oIurwTSKB

There’s a full band a dude absolutely ripping it on the clarinet pic.twitter.com/CtiDMmcIMH

“The battle isn’t over”

While Trump campaign staffers and his supporters are beginning to converge on the city, armed with both lawsuits and rage, the rest of the world wonders whether the interlopere prepared for a fight with a city that famously throws batteries at its own athletes. After all, Eagles fans have nothing to do this weekend.

I would not fight the sweetest school teacher in Philly. Wouldn’t scrap with the most gentle librarian. They all do like six hours of MMA a night and will light a dumpster on fire and throw you in it. Whew. The ass beatings that the universe is lining up. My stars.

Philadelphians have seemed to grasp their city’s essential role in this election, watching throughout the week as their ballots were counted and Biden’s Pennsylvania numbers slowly ticked upward. The city that brought forth Rocky, Gritty, cheesesteaks and American freedom may just bring home a Democratic victory.