Images from Philly social media feeds — and surveillance cameras!!! — wound up as court exhibits in Trump's lawsuit against the Commonwealth. 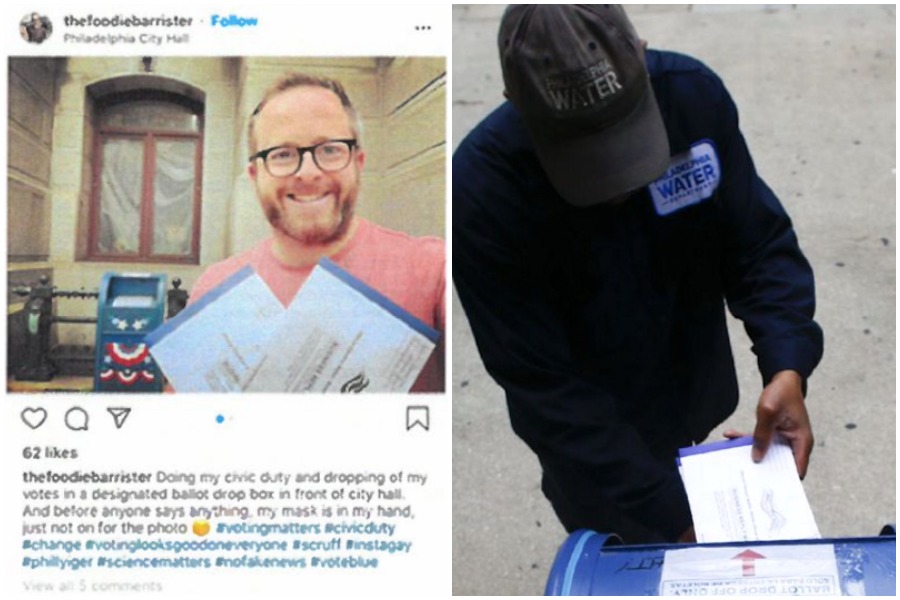 Left: Philadelphia lawyer Adam Goodman (pictured) was shocked to find that an Instagram post showing him prior to the Pennsylvania primary earlier this year wound up as “evidence” of voter fraud in the Trump campaign’s lawsuit against Pennsylvania. (Image via court filing) | Right: Another piece of so-called evidence, showing a man wearing a Philadelphia Water Department hat and sweater before the primary. (Image via court filing)

These days, it’s basically standard operating procedure to turn exercising your right to vote into an Instagrammable moment. Or a Facebook post. Or a TikTok. Whatever. But you should probably keep in mind that there are forces out there looking to use that moment against you — and against the democratic process — as Philadelphia lawyer Adam Goodman recently learned.

Earlier this year, Goodman and his husband, Larry Fried, took their mail-in ballots for the 2020 primary to an official dropbox outside City Hall. Before they submitted their ballots, Goodman posed for a photo. The dropbox and City Hall were in the background. And in the foreground were two ballot envelopes.

“Doing my civic duty and dropping [off] my votes in a designated ballot drop box in front of City Hall,” Goodman wrote on an Instagram post. “And before anyone says anything, my mask is in my hand. … ”

Ironically, he was concerned that his unmasked face would be the point of controversy stemming from this post.

You’ll note that Goodman used the word “votes” instead of the word “vote” and “my” instead of “our.” And we see two ballots but only one person. Goodman explains that his husband simply didn’t want to be in the photo.

“He was wearing sweatpants and didn’t think he looked cute enough for Instagram,” Goodman recalls. “You can’t see it in the photo, but we are actually both holding up the ballots.”

Goodman says the duo then placed their ballots in the dropbox and went on their merry way.

“I didn’t think anything of it,” says Goodman today.

But recently, Goodman learned that this seemingly harmless photo op wound up as part of the Trump campaign’s federal lawsuit against Pennsylvania that sought to, among other things, ban dropboxes in the state. The campaign argued that the dropboxes opened up vast opportunities for voter fraud and all sorts of other shenanigans, such as attempting to vote twice.

Now, this is where I should probably note that it actually is illegal in Pennsylvania to submit somebody’s mail-in ballot on their behalf, whether you’re dropping it off in a blue United States Post Office mailbox or using one of the dropboxes. Some county commissioners were reportedly confused about that during the primary.

Goodman isn’t the only one who wound up as part of the Trump lawsuit in Pennsylvania.

Here’s another example from social media where a woman is clearly holding two mail-in ballot envelopes for the primary. (I redacted her name, since I was unable to reach her.) 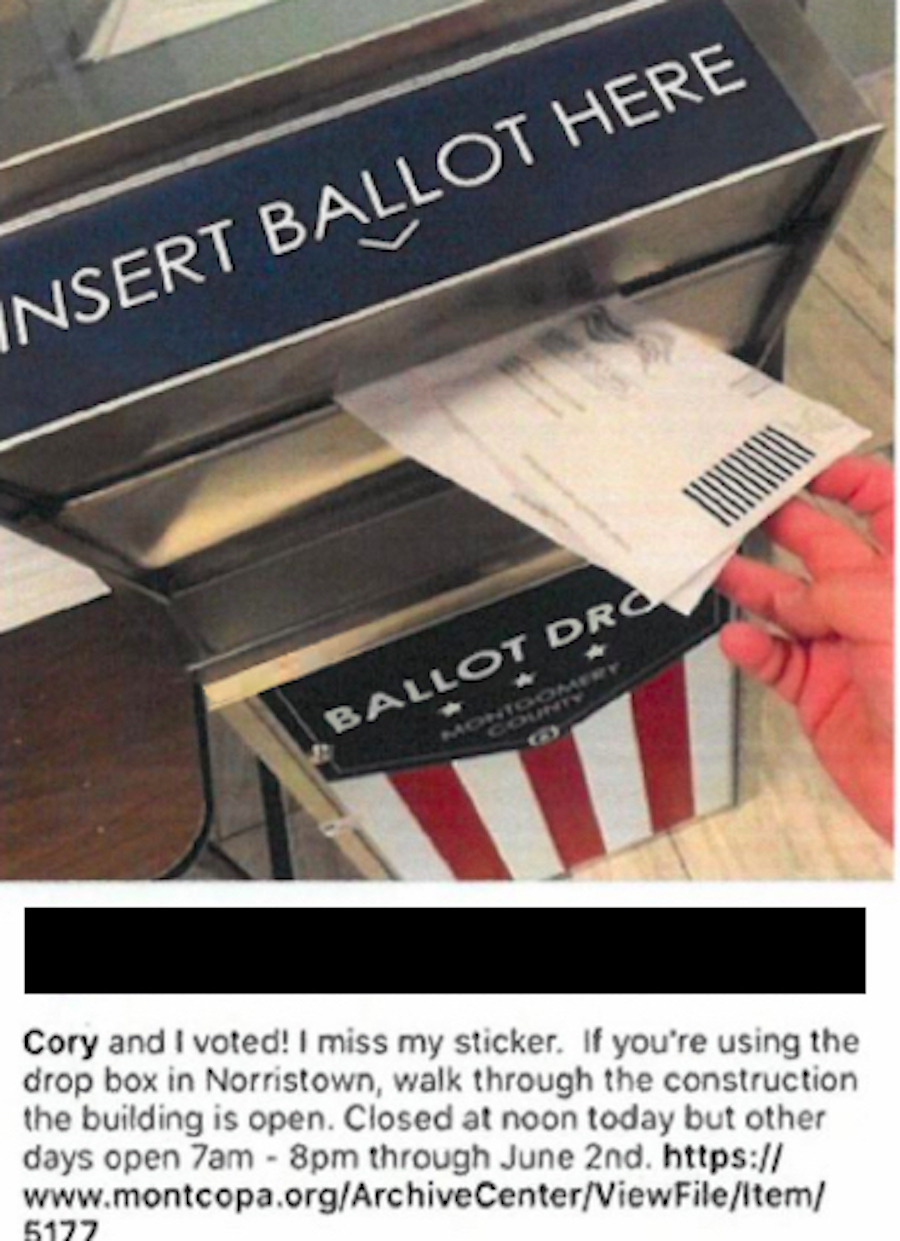 Then there’s this guy in a Philadelphia Water Department hat and sweater. He appears to have two mail-in ballot envelopes as well, but the origin of the photo is unclear: 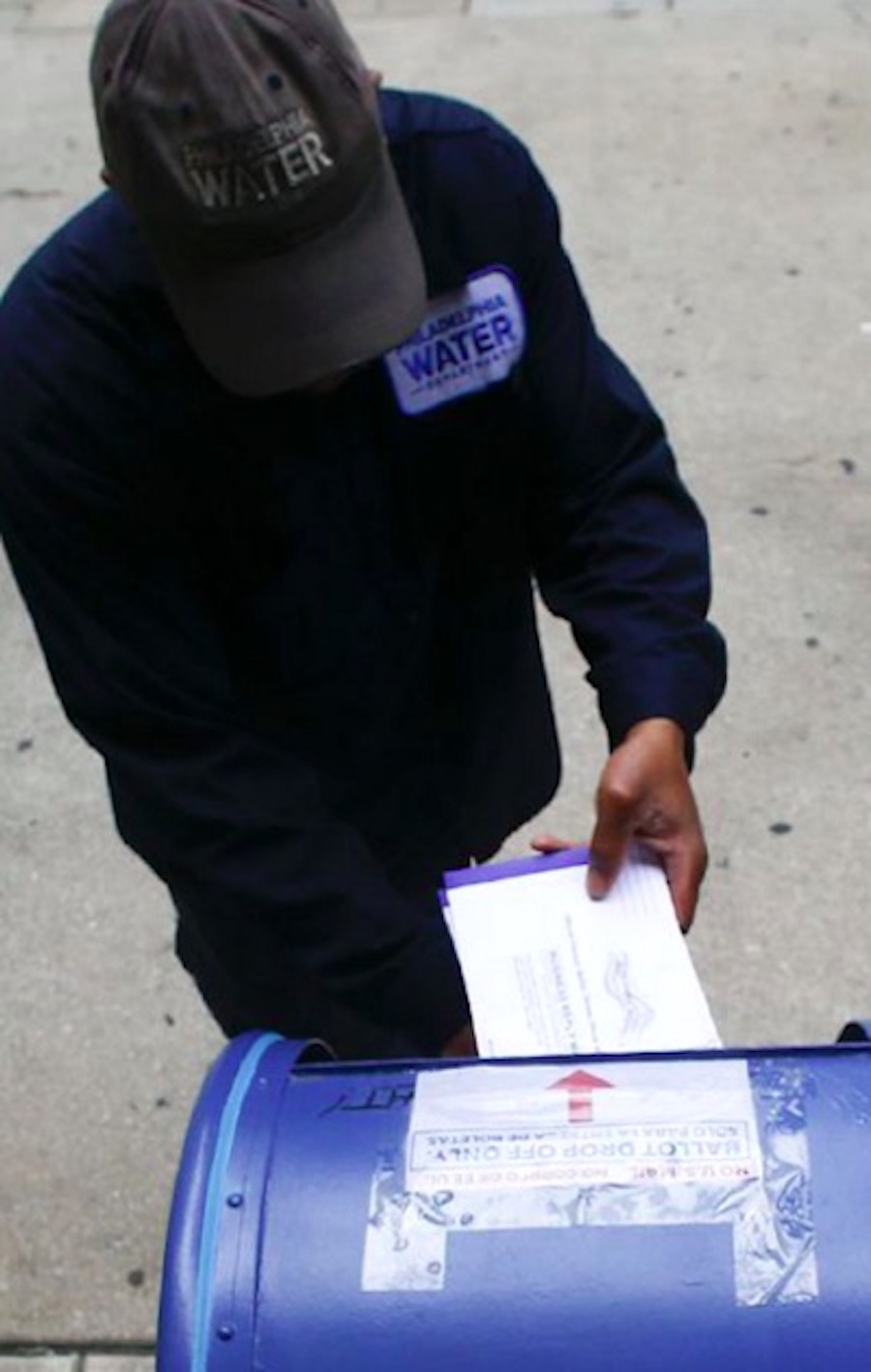 And then there are a slew of stills from surveillance video inside a government building way out in Elk County that purport to show several instances of people putting two envelopes in the dropbox. Here’s one such person:

I must really need new glasses.

According to court documents, an expert witness for the Trump campaign testified that these images all add up to evidence of “rampant problems and associated fraud in Pennsylvania’s 2020 primary election.” He went on to say that the dropboxes in Pennsylvania will “undermine the integrity of the 2020 general election.”

In the end, the court ruled that the campaign’s claims were too “speculative” and the evidence supporting those claims was “scant.”

According to the court, the campaign did produce some evidence of voting irregularities in the past — in fact, the court said the photos in question were among the most convincing presented — but that this evidence did not prove that any threat presented by the dropboxes was “certainly impending” — the legal threshold that the campaign had to meet. The court dismissed the entire case on October 10th.

That said, the court did make clear that while the evidence of past irregularities doesn’t mean there will be irregularities or outright voter fraud in the 2020 general election, it’s certainly possible that there could be, and that the campaign is free to take action if it finds evidence of those activities. And no doubt Trump will be taking plenty of action if the election doesn’t go his way, whether there’s actual evidence of anything or not.

“God forbid the election becomes contested,” Goodman warns. “I am going to vote in person. We have our ballots, and we are going to surrender them on Election Day and vote at the polls. It’s crazy to me the lengths that this administration is going to in order to discredit the results of this election. I mean, my Instagram? If this election is contested, I certainly don’t want my mail-in ballot associated with any claims of fraud. I’m just doing it the old-fashioned way.”

For the rest of you, election officials are asking those who have received mail-in ballots to use them as opposed to trying to vote at the polls. It could get … complicated. Well, more complicated than it already is.