If You’re Not Voting in This Election, Yes, I’m Judging You

The presidential candidates we have this election aren't ideal, but one of them could literally kill us all. Opting out is not an option. 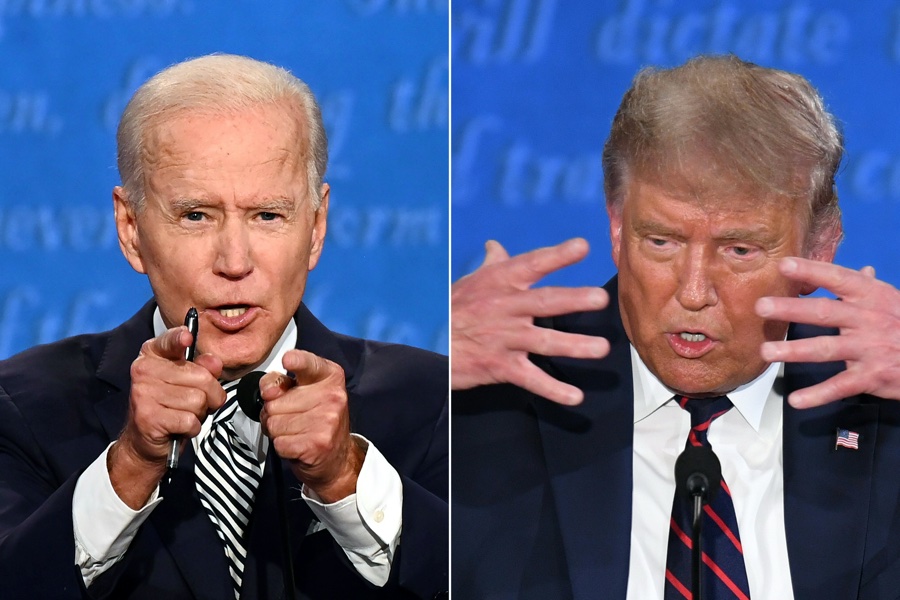 Democratic Presidential candidate and former US Vice President Joe Biden (L) and US President Donald Trump during the first presidential debate in Cleveland, Ohio on September 29, 2020.  (Photos by Jim Watson and Saul Loeb/AFP via Getty Images)

With less than a month before the general election, I have to admit that I’m getting pretty damn nervous.

Each week, there’s a new diabolical antic from President Trump that seeks to undermine my rights as a Black queer millennial. This week begins the Senate confirmation hearings for Trump’s Supreme Court nominee, Amy Coney Barrett. Barrett, a staunchly conservative judge, has a documented history of taking anti-abortion stances that have been driven by her religious beliefs. It doesn’t help that she’s also been critical of the Affordable Care Act. If appointed, she will cement a conservative majority on the Supreme Court, where some justices are sending signals that marriage equality is far from settled.

All of this could have been prevented if people had shown up to the polls in 2016. The power of any Supreme Court decision is rooted in the power of the presidency. In just one term, it’s likely that Trump will add three Supreme Court justices, giving the conservative majority a 6-3 advantage. Elections have consequences — we should all know this by now. And yet, there were some who thought that such dangers were manageable.

In 2016, millionaire celebrity activist Marc Lamont Hill told us that “we can afford to lose an election” to Trump as an act of radical resistance. Hollywood actress Susan Sarandon suggested that we might get more of a “revolution” under a President Trump than we would a President Hillary Clinton. But now, with a deadly pandemic still raging, racial unrest persisting, and an economy that continues to fail the most marginalized — all of that was clearly a damn lie. Yet in the middle of a political repeat of four years ago, some people are still reluctant to vote.

I get the frustration, but I don’t understand the response. Like many young voters and progressives, I’m not impressed with either of these candidates. I abhor Trump’s tyranny and can’t stand Biden’s moderate stances. But there’s a pretty stark difference between a tyrant and a lackluster moderate. The latter may stall us; the former can kill us. And for anyone who doesn’t understand how crucial this particular election is, this choice is fatal. Now is not the time to be consciously selfish. Instead, become a stubborn utilitarian.

If you’re willfully choosing not to vote on Election Day, I’m judging you. And I’m going to rethink how serious you are about protecting the greater good.

The American political system is a shitshow, without a doubt. Our highly partisan two-party system has led to an unfair process that often prioritizes self-interest above community need. Political parties win elections and gain power; we, the people, are often left begging for those victories’ wins to trickle down to the rest of us. On those rare occasions when people have actually benefited from these victories, we’ve seen the establishment of affordable health care, marriage equality, Social Security, reproductive rights, anti-discrimination policies and other great leaps. But if we don’t unite behind the candidate who has expressed support for building on these progressive gains, we run the risk of losing them — and then facing the daunting task of restoring them.

In 2020, we can’t afford starting over. I’m all for a revolution and transforming our political systems — they’re in desperate need now more than ever. But can we actually get some form of decency back in office before we enact such change? The past four years haven’t brought about the kind of radical change that made the most marginalized lives better. Black and brown communities remain impoverished and neglected, with bigger targets on our backs thanks to a rise in hate crimes perpetrated by those emboldened by our current president. Impeachment failed, and Republicans still control the Senate, where they’ve blocked lifesaving policies. More than 210,000 people have died from COVID-19, and there’s still no sign of a stimulus package.

If you choose to sit this election out, the suggestion is that you’re fine with all of this and are okay with things becoming even more dire. Such resistance isn’t smart, intellectual or progressive. The choice not to vote is legal, but right now, it’s simply not moral. It’s not fear-mongering at this point — the shit gets more real every day. People continue to die,  and the negligence of our current president has played a huge part. Not to vote against this carnage is to be complicit.

I didn’t vote to elect Joe Biden and Kamala Harris because I’m fans of theirs. I did so to help unseat a man whose ineptitude and cruelty has required me to witness the untimely deaths of so many colleagues, mentors and family friends. I voted for my life and for a chance to be able to resist a more respectable administration. I hope those still on the fence choose the rest of us over self-righteousness.

Got questions? Philly Mag is collaborating with Equally Informed Philly, an initiative that will get you answers to your voting questions, sent right to your phone. Text EQUALINFO to 73224 for a personalized answer, like where to find the nearest polling location to you.