What Trump said during the first presidential debate was horrible. But ugly t-shirts and excessive consumerism as a clap back? Give me a break. 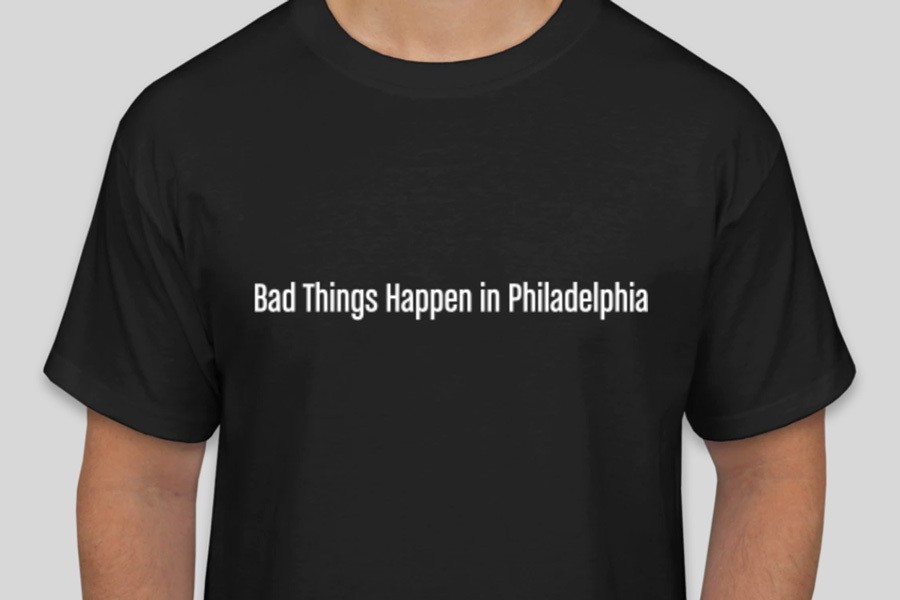 No, this isn’t a real “Bad Things Happen in Philadelphia” t-shirt for sale. Our digital editor whipped up this number on Custom Ink.

I am usually here for a great Philly clap back, because they are often exceptionally massive with purpose.

Like when we recently came together en masse to let that not-so-proud hate group our President infamously told to “stand back and stand by” know that hate isn’t welcome in West Philly. Or when we formed a wall of love to block out the bigoted Westboro Baptist Church demonstrators who tried to intimidate LGBTQ community members in the Gayborhood. These were moments when we showed the nation that Philly sticks up for its own and that we collectively show up for one another, no matter what.

But following the first presidential debate between Trump and Democratic nominee Joe Biden, we have lost sight of that spirit altogether. Instead, we have resorted to plain ol’ pettiness, without rhyme or reason. All because the President gave us an undesirable shoutout.

This was the shot the President took at Philly while lying about poll watchers having problems here. Fact check: There are currently no voting polls in Philadelphia, because traditional voting has not yet begun.

Rather than simply shrug off Trump’s words, the internet went wild. Okay, that’s to be expected. We’ve been on lockdown for months and needed a release. But what started off as a night of over-the-top online antics and memes has now become a craze built around unbridled capitalism and downright foolishness. By now, unless you’ve been living under a rock, you know that there are dozens of “Bad things happen in Philadelphia” t-shirts, hoodies, and other merchandise that we don’t need. Most of the groups making these items aren’t giving proceeds to charity and/or supporting local businesses that are really in need. No, it’s about capitalizing on a petty trend that, honestly, makes us seem more childish than bold.

Sorry Philly, but we are doing the most right now in the worst way.

In the past, when the President has attempted to undermine our values, we’ve hit the streets and protested — like we did ferociously at the Philadelphia International Airport at the start of his notorious Muslim travel ban. When we found out Trump and his Republican base were having a retreat in Center City, we threw a “queer rager” outside the Lowes Hotel where they were convening. We didn’t shop for shirts online or try to out-hustle our fellow Philadelphians with Gritty-themed catchphrase swag. We were better than this.

In a progressive city, conspicuous consumerism should not be confused for an act of resistance. We are three weeks away from Election Day and wasting resources on a t-shirt with Trump’s words does nothing to actually rebel against his tyranny. The “bad things” he’s saying could happen in Philadelphia involve not ensuring a safe and democratic election process — so we should run with that and all work to make sure our voting process is beyond reproach — not buy more crap that just gives him the attention he craves.

Rather than waste your money on an ugly t-shirt or mug you don’t need, how about using that cash to buy lunch for volunteers at the voter assistance locations that Trump keeps falsely calling polling locations. How about you step up and actually volunteer to become a poll worker on Election Day to ensure that your neighbors are able to vote safely and securely. These are smarter, more proactive ways to combat Trump’s rhetoric than acting like a teenage rebel.

To focus solely on Trump’s words, and not act to dismantle his lies with tangible action, is to fall right into his trap. He’s baiting us and would rather us obsess over words than plan our next steps. Bad things won’t continue to happen in Philly if we can somehow stop fixating on this phrase and return to our underdog spirit of protecting our own — especially at a time when our voting rights are under attack.

Playtime is over, let’s get back to being the Philly we know we are — in spite of Trump.