Bryan Turner claims one Philly cop told him he hoped Turner would get “caught in the line of fire.” 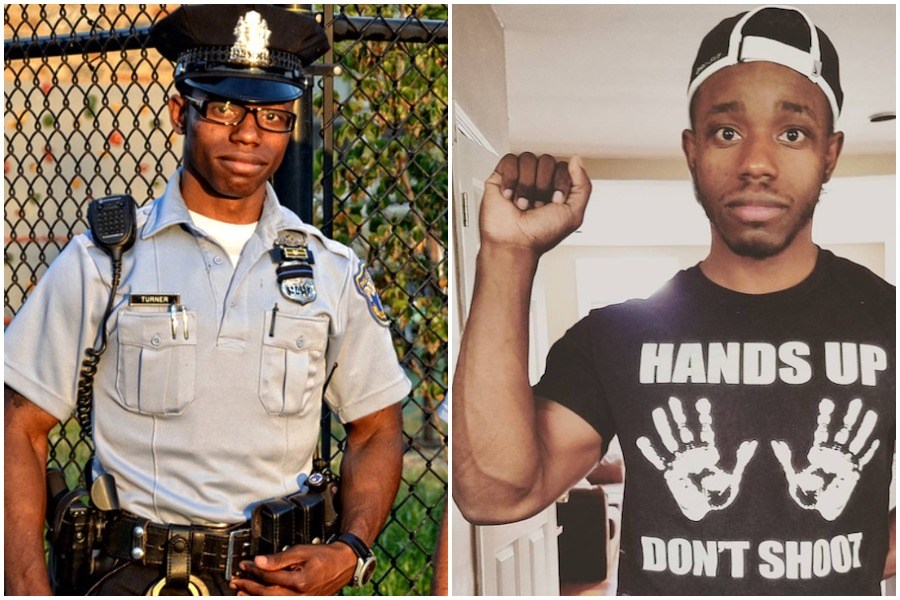 Bryan Turner is no stranger to controversy within the Philadelphia Police Department.

After joining the force in 2011 at the age of 22, Turner was outspoken about what it was like to be a young Black man in the United States — and also, more specifically, what it was like to be a Black cop in Philadelphia. He spoke out in support of Black Lives Matter, well before the protests brought the movement back into the national spotlight earlier this summer.

On social media in 2015, Turner posted a photo of himself wearing a “HANDS UP: DON’T SHOOT” t-shirt, his raised fist in the air.

That same year, the police department investigated and reprimanded Turner over his social media activities. But he didn’t let up.

He changed his Facebook cover photo to an image of a Philadelphia building with the phrase “FUCK COPS” graffitied onto it. He did that after a white Philly cop, Ryan Pownall, shot and killed David Jones, a Black man, during a 2017 confrontation over a dirt bike. Turner continuously spoke out about that killing until Pownall was charged with third-degree murder, more than a year after the incident. Pownall has yet to go to trial.

And then in 2018, just a couple of months after Pownall was charged with the Jones killing, Turner himself was arrested and charged with falsifying arrest paperwork and other offenses. He lost his job in December 2018. Turner’s attorney said the charges were all bogus, brought about because he wouldn’t keep quiet. And Turner was eventually found not guilty of all charges.

According to his just-filed federal lawsuit against the city, Turner has been unable to obtain any job in law enforcement, because when he applied for a gun permit late last year, the Philadelphia Police Department denied his application.

“Applicant is an individual whose character and reputation is such that the individual would be likely to act in a manner dangerous to public safety,” the department wrote in its ruling, according to the suit. (The Philadelphia Police Department is the agency that issues gun permits for all residents in Philadelphia, not just cops or former cops.)

The lawsuit also makes numerous allegations about “hostile comments” and “hostile treatment” Turner received from other cops while he was still on the job.

Turner claims that a police sergeant once asked him for his badge number and district assignment so that the sergeant wouldn’t accidentally contribute to his fund when he gets killed. Another cop allegedly wrote that he hoped that Turner got “caught in the line of fire.” He says a retired cop emailed him to say, “You are so fucked. You have no idea what’s coming. Watch your back little faggot.”

The lawsuit alleges that Turner attempted to get higher-ups to intervene but that his pleas fell on deaf ears — all the way up to then Philadelphia Police Commissioner Richard Ross.

Turner accuses the city of racial discrimination, unlawful termination, harassment, and retaliatory actions. And this isn’t the first time that Turner filed a suit like this against the city. He did so in 2016, when he alleged that his captain ignored his claims of racial discrimination back then. The case settled out of court after a judge agreed that his work environment was “hostile.”

So what does Turner want out of all of this now? Monetary damages are unspecified in the lawsuit. Surely he doesn’t want to go back to work for the same police department, right? Wrong.

“He is seeking his job back,” Melissa Freeman, Turner’s attorney, tells Philly Mag. “He desires to continue to build relationships with the community where tension might be forming.”

The Feds Have Their Eyes On the Parkway Encampment

Back when mysterious federal agents began scooping up protesters out in Portland, Oregon in unmarked vehicles, there were concerns that the same thing could begin happening here in Philadelphia. That never materialized.

But now it sounds like the feds want to get involved with the Parkway encampment.

“I’m watching this situation closely,” wrote William McSwain, the United States Attorney for the Eastern District of Pennsylvania, in a tweet on Wednesday night. “If anybody at the encampments defies the police and commits any federal crimes in the process, here is your warning: you will be prosecuted to the fullest extent of the law.”

This comes after the residents of the Parkway encampment remain following Philadelphia Mayor Jim Kenney’s three so-called deadlines for them to leave.

McSwain has also been making a habit of stepping into other local matters, because he is clearly fed up with District Attorney Larry Krasner’s progressive agenda.

Philly’s Homicide Numbers Continue to Move in the Wrong Direction

Each week, I get the crime stats from the Philadelphia Police Department, and each week, I’m hoping that I get some good news to share with you. Unfortunately, that just doesn’t seem to be happening.

As of midnight, there had been 323 confirmed homicides in Philadelphia. That’s the worst year-to-date number in all of the years of data available from the Philadelphia Police Department’s website, which goes back to 2007. In 2013, when we had the lowest number of homicides year-to-date, that number stood at 175.

The homicide count is currently up 32 percent year-to-date over last year, and last year we ended the year with more homicides than we had in twelve years. If we continue at that rate, we would end the year with 469 homicides. Not the kind of record we want to be setting.