How the Pandemic Taught Me to Embrace My Clutter

I’d always aspired to Marie Kondo-style minimalism. But a global crisis has me rethinking what can “spark joy.” 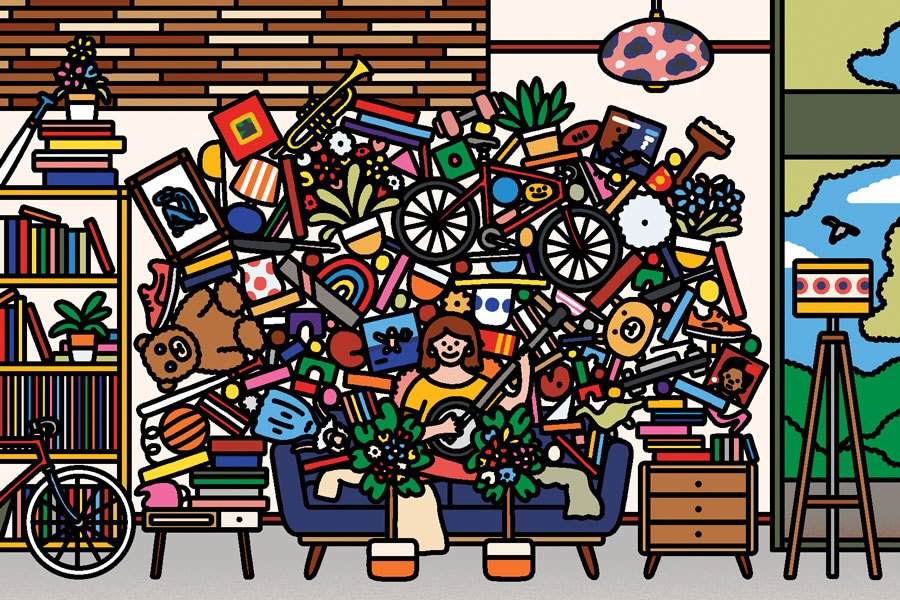 The pandemic is making me rethink my quest for minimalism. Illustration by David Biskup

It was roughly six years ago that Marie Kondo first entered my consciousness. Her book, The Life-Changing Magic of Tidying Up, had just come out, and pretty much every minute of my life since then has been filled with a mild sense of shame. In a post-Kondo world, it became clear to me that my self-image as a tidy(ish) person who is disciplined about clutter was a sham. Suddenly, my entire material life, however well organized — forgotten yoga pants in the drawer, old puzzles in a basement closet, hand-me-down toys the kids hadn’t gotten around to playing with, so many books — made me feel like a candidate for Hoarders.

Of course, feeling like a failure next to an aspirational lifestyle guru wasn’t a new experience for me. As an American woman and a voracious consumer of media, I’ve spent much of my adult life trying — unsuccessfully — to live more like Ina and Oprah and Gwyneth, and then Ina some more. But with Kondo, my shortcomings felt different. The idea of paring down possessions to focus on the things I love felt like more than the thesis of a brand I liked; it felt like a system to combat the suffocating excesses of modern life. It felt like a cool bath after a long, filthy slog. And I wanted in — if not to the six-step “KonMari Method” in its entirety (must I really thank old stacks of magazines for their service before recycling them?), then to the larger movement in which Kondo was a touchstone. Remember? This was also about the time we saw the rise of tiny homes, and hyper-curated “capsule wardrobes,” and a fresh cultural fascination with minimalism as both a decor aesthetic and a lifestyle choice. It all felt wonderfully to me like what the New Yorker’s Jia Tolentino, in writing about the minimalism trend, called “a form of material humility.”

As it happens, many parts of my life — our 1,200-square-foot rowhome, my faith, an aversion to knickknacks — compel me toward material humility. I’m not a clotheshorse or a collector. I relish the idea of linen closets filled only with linens. And yet I haven’t been able to commit to an epic purge in the way Kondo or any of the modern minimalists might advise. For starters, I have two small children, and anyone with children knows that unless you’re a pioneer or an ascetic, parenting in America comes with a metric ton of crap to stash and store, whether it sparks joy or not. (Mostly, it does not.)

But more deeply, I’ve found it impossible to shake a sort of a doomsday outlook when it comes to getting rid of certain stuff. It’s a mind-set that runs directly counter to the exquisite freedom that pulled me toward Kondo and her ilk, but I can’t help it: Paring down to only the most essential or most cherished always felt incautious, in a way. Almost hubristic. What if I need those yoga pants at some point? What if some crazy catastrophe befalls us and I’m glad to have extras to use or to share? What if I’m saving money in the long run?

Paring down to only the most essential or most cherished always felt incautious, almost hubristic. What if I need those yoga pants at some point? What if some crazy catastrophe befalls us?

And so it was that for years, I waffled between defensiveness and disgust over how often just-in-case won out over the Kondo method. Then came a pandemic.

And voilà: My nagging clutter-shame flipped, just like that, into a smug pack-ratty pride. Because in week 1,000,000 of working and schooling and living every waking moment at home, guess what I’m wearing right now?

Turns out having a couple extra pairs of yoga pants — plus that ugly, space-sucking stash of “rainy day” toys, a secondhand banjo that hadn’t been played in years, piles of books to lend to friends, forgotten old records for the kids to dance to, and loads more unnecessary “clutter” — can spark surprising amounts of joy in a quarantine.

I think a lot lately about my grandmother, who was seven when the Depression started and 17 at the start of the Second World War. She held onto all her stuff — not pathologically, but pragmatically. She darned holey socks rather than tossing them long after her life required that level of frugality, and bought things infrequently and only when she either truly needed something or deeply loved it.

Grammy — that’s what we called her — didn’t know from minimalism or from Kondoism, though she could certainly speak to taking grateful care of her things. Curating an “ideal lifestyle” had nothing to do with it. It was behavior born of a lived experience, a different sort of material humility. You know — waste not, want not.

I’m not romanticizing what was a decidedly unromantic, almost painfully hard-boiled approach to possessions. (My dad remembers his mom moving money from one bank to another more than once to snag the promotional toaster or whatever item was being used to lure new customers.) What I’m saying is that global crises have a way of shaping the way we consume, consider and live amongst our things.

In her New Yorker essay, Tolentino points out that the rise of “new minimalism” might have had roots in the financial crisis of 2008, when people suddenly wanted or needed to learn to live with less … even if the movement did eventually (and ironically) come to be associated with “an increasingly aspirational and deluxe way of life.” She points to the austere high-end home aesthetic famously favored by the likes of Kim and Kanye; she also nods at the $75 tuning fork for sale on Kondo’s website.

In fact, more than one critic has pointed to the inherent privilege tied to the idea of decluttering. A life of options and plenty makes getting rid of your material possessions a whole lot easier. As with Oprah and Ina and Gwyneth, the plenty bit is partly why we call them “aspirational” lifestyle brands. To suggest a $120 quartet of lipsticks as a gift idea or sell a $125 plain white “lifestyle” t-shirt or, yes, talk about off-loading that which does not “spark joy” all assumes a lot about someone’s life.

In any case, post-COVID, it’s impossible to imagine that a clutterless existence could possibly feel better than a prepared one. Prepared for what, exactly? Another depression? A war? A zombie apocalypse? God only knows at this point. But, well … maybe hang onto that extra loaf pan?

I can see that this type of thinking might seem a slippery slope. Surely the road to hoarding begins with a “what if.” But I don’t advocate stockpiling. I don’t promote ­panic-buying. Or overbuying. Or maybe even buying at all. (For one thing, surely the world has enough baby clothes to circulate amongst ourselves for the rest of time, yes?) Despite the rise of minimalism and the millions of Kondo devotees, America’s instincts for greed and glut are alive and well. (Actually, they’ve never looked uglier.) I know some of my mortification about not letting go of more things is really tied up in the fact that I own so much in the first place.

But in this time of COVID reflection, I keep coming back to a story that showed up in the Wall Street Journal not long after Kondo’s Netflix series, Tidying Up With Marie Kondo, debuted. The piece was about the purging frenzy that the show inspired, and one not-so-surprising side effect: donation centers overwhelmed by “goods that truly, nobody wants.” Stephanie Ziersch, a sustainability expert quoted in the piece, told the reporter that she’d really like to propose a new seventh step in the KonMari Method — the mottainai step, a Japanese term that suggests regret over wasting a resource. “It encourages reflection on waste and action when it comes to reducing, reusing, recycling and respecting,” Ziersch explained.

No disrespect to Kondo, whom I admire, but mottainai, simply on its own, feels like a type of material humility better suited for the moment than a philosophy built around needing to “cherish” every item in the house. Or maybe it’s that waste-not-want-not is just part of my DNA.

Also, speaking of humility, another revelation I’ve had during the pandemic and self-isolation and 2020 in general is that most of our assumptions — about everything — have been wrong. We know far less than we think we know. Control is an illusion, nothing is a sure bet, and we sometimes end up missing what we didn’t even know we liked (SEPTA rides!?). In short: It’s awfully hard to predict now what you might cherish tomorrow. Keep the banjo.

Published as “In Praise of Clutter” in the August 2020 issue of Philadelphia magazine.