Indoor Dining Still Not Coming Back Yet, Says Farley

We can't say we're all that disappointed by the news. Plus: Parents don't want to send their kids back to Philly public schools, and why a convicted Abscam politician has caught the attention of the feds yet again. 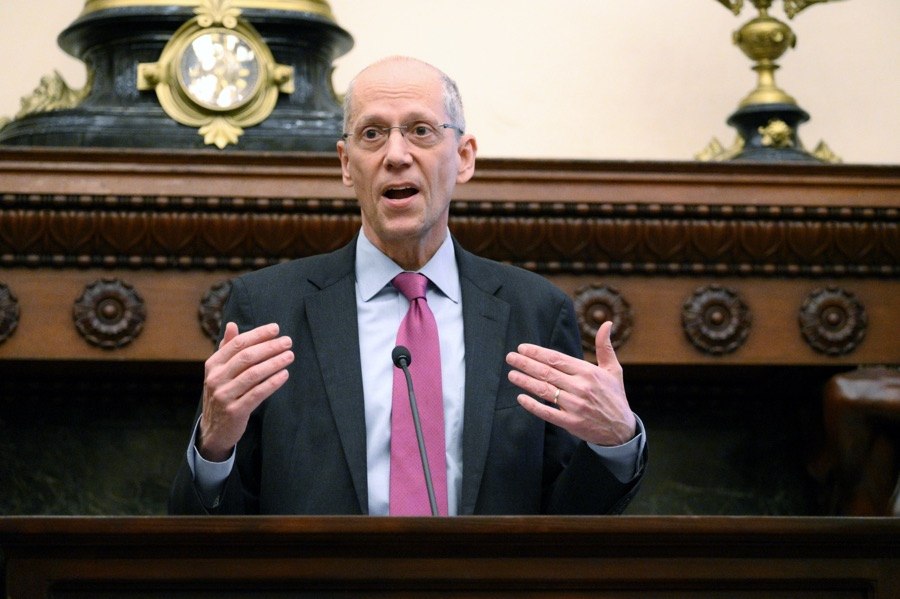 Health commissioner Thomas Farley pictured at a coronavirus press briefing in March. On Thursday, Farley indicated that indoor dining in Philly would be delayed beyond August 1st. Photo by Bastiaan Slabbers/NurPhoto/Getty Images.

No big surprise here: At a press conference on Thursday, city health commissioner Tom Farley suggested that indoor dining, which was tentatively scheduled to resume (at the earliest) on August 1st, isn’t likely to return by that date.

The city thinks outdoor dining, on the other hand, is being (or at least can be) handled safely, in part because viral droplets dissipate much more quickly outside and there’s ample room for social distancing.

Farley seemed to indicate that indoor dining might return if case counts start to decrease significantly, but that’s not happening yet. He announced that the city has seen an average of 139 new cases per day over the past week, up from 110 cases the week before. Rising case counts, Farley noted, mean that people are “spreading [the virus] to more than one person on average, so our precautions over the long term are not good.” He went on: “We’re much more likely not to ease restrictions, and to potentially add additional restrictions, if daily case counts are rising rather than falling.”

There have been lots of intense public meetings lately. Yesterday, we told you about Wednesday’s five-hour public art commission Zoom over the fate of the Columbus statue in Marconi Plaza. On Thursday, the Philadelphia school board topped that with an eight-hour meeting during which parents, teachers and students raised concerns about the school district’s plan for a staggered in-person schedule in the fall. (No word on whether there was a built-in snack break or not.)

In short: Many people are at odds with administrators and don’t want their kids to come back in person, echoing a similar divide in higher education. More than 2,000 Philly parents have already opted for full remote education in the fall.

The school district is in something of a tricky position here. There is some evidence, though it seems far from settled, that younger children spread the COVID-19 virus less than those ages 10 and up. “Schools are not hot spots of COVID transmission,” the Inquirer reported health commissioner Tom Farley as saying. There’s also the issue of child care, which can be impossible for families in which parents have to work full-time, and the additional complication of internet (in)accessibility for a significant chunk of the district’s students.

The school board was supposed to vote on the district’s proposed fall plan at the meeting, but after the barrage of complaints, it voted to postpone that decision for a week. In the meantime, the district is heading back to the drawing board.

By the way, someone should give Inquirer reporter Kristen Graham the Pulitzer Prize for live-tweeting. She covered the whole damn thing. (Note the time stamps below!)

To say that I am warming up my tweeting fingers for tonight’s #phled board meeting would be a gross understatement. 153 speakers! I don’t remember that high a number ever, even in the SRC/school closing days. What do you think @ssnyderinq @dalemezz @PaulSocolar @MensahDean?

Ozzie Myers of Abscam Infamy Is Back in the News

Here’s a blast from the past: The Department of Justice announced an indictment for voter fraud on Thursday that features a figure you might remember from the 1970s Abscam sting — former House Representative Michael “Ozzie” Myers.

Quick summary: Back then, Myers represented Philly’s 1st Congressional district. The FBI had agents pose as representatives of an Arab sheikh and offer bribes to politicians. (That sort of sounds like entrapment to me, but what do I know?) Anyway, a bunch of political figures accepted those bribes and were charged, including seven Congressmen, three Philadelphia City Councilmembers and the mayor of Camden. Caught on a wire, Myers delivered what is probably the most famous line from the whole sting: “Money talks in this business, and bullshit walks.” Myers was eventually convicted, expelled from the House of Representatives, and sentenced to three years in prison.

Because this is Philadelphia, Myers continued to hold considerable sway in local politics in the post-Abscam years, working as a consultant who could help down-ballot candidates, like municipal judges, maneuver through the city’s parochial ward system. That consultant role is the basis of the Justice Department’s new allegations against Myers, which claim that he bribed an election official to stuff the ballot box in order to give a boost to candidates who had hired him. (Myers’s lawyers declined to comment when reached by the Inquirer.) The more things change, the more they stay the same. …

Here’s the full release from the DOJ.

The developer of the former South Philly refinery site reveals its plans.