The stockbroker turned convicted stalker turned Philly-based journalist was interviewed by Piers Morgan on Monday. It didn’t go so well. 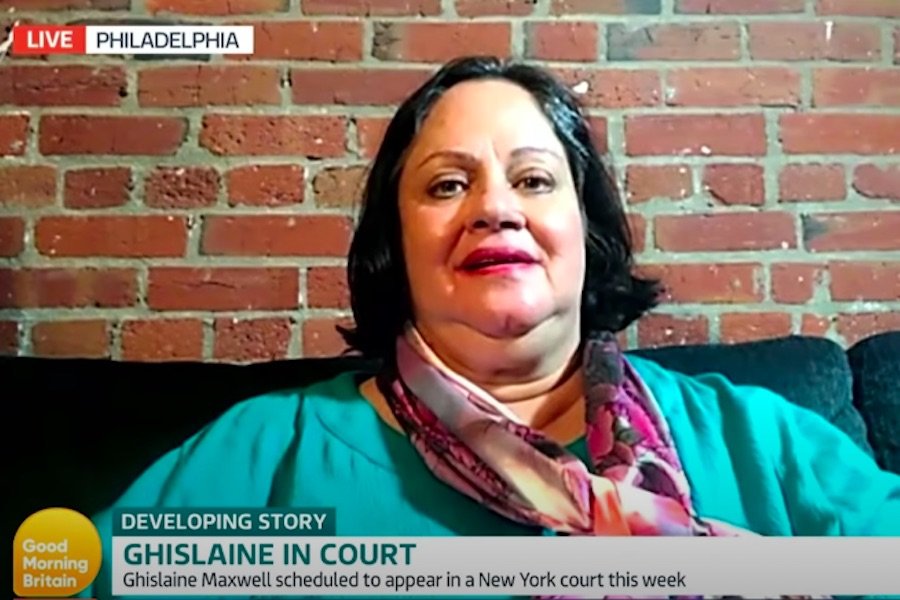 Convicted stalker and “Ghislaine Maxwell friend” Laura Goldman, who has been making the media rounds in the Jeffrey Epstein scandal. (Image via YouTube; video embedded below)

If you’ve been closely following coverage of the Jeffrey Epstein scandal, you may have seen a familiar local name pop up over and over again: Philly’s Laura Goldman, a stockbroker turned fugitive from justice turned convicted stalker turned journalist of sorts.

We first noticed this last year, when Goldman turned up in some British tabloid reports about Epstein. She was variously described as a friend of Epstein associate (and now accused conspirator) Ghislaine Maxwell and as a friend of Maxwell’s sister Isabel.

To give you one salacious example:

Oh, and Goldman also talked to The Sun about how “sex-obsessed” Maxwell was. Goldman added that Maxwell particularly enjoyed speaking in public about “oral sex techniques.”

Goldman is nothing if not classy.

But then the Epstein story sort of disappeared from the 24-hour news cycle. And so did Goldman’s 15 minutes. Or so we thought.

Now that Ghislaine Maxwell has been arrested, Goldman is once again doing the Jeffrey Epstein Media Tour. And in full force.

In the Daily Mail, Goldman, who is now described as one of Ghislaine Maxwell’s “closest confidantes,” says that Maxwell urged Epstein pal Prince Andrew not to do that catastrophic TV interview in November. Regarding Maxwell’s current predicament, Goldman had this to say to the Daily Mail: “Almost every woman you meet in jail is there because of a man. Some women are much more susceptible because of society’s pressures to do things to please a man.”

Then there’s the Telegraph article from July 3rd titled “My friend Ghislaine: Confidante reveals how Maxwell’s ‘fling’ with Prince Andrew means she’ll never sell him out.” In that riveting account, Goldman explains why she’s speaking up to defend her BFF Maxwell thanks to “the bloodlust of the mob and the criminal justice system against her.”

And then on Monday, Goldman actually wound up live on Good Morning Britain, the U.K.’s version of Good Morning America. Goldman was interviewed by Piers Morgan and co-host Susanna Reid. That didn’t go quite so well. Morgan lashed out at Goldman’s televised defense of Maxwell, calling it “repulsive and laughable.”

Watch it here in all its glory:

Goldman has had quite the storied life. After graduating from Wharton, she worked as a stockbroker at Merrill Lynch and PaineWebber on Wall Street. While she was working at PaineWebber, she hooked up with married financier Thomas Lee, the man who’d go on to sell Snapple for $1.7 billion.

The relationship between Goldman and Lee went sour, and she allegedly began stalking and harassing him, said prosecutors. Then she was arrested and accused of extorting Lee. Goldman made a cushy plea deal and got probation. But she wasn’t done with Lee just yet. According to court documents, Goldman threatened to kill him and his children and, later, a judge. Somehow, she got probation again.

Then in 2000, Goldman was accused by the feds of threatening Lee’s children again.

“Oh, I know everywhere they go,” prosecutors claimed Goldman responded when Lee’s attorney asked if she was keeping track of Lee’s kids. “That’s my target. … I don’t think you realize how serious I am about it.”

An arrest warrant for Goldman was issued. But she fled, first to France, then to Israel. She was a fugitive. You can’t make this stuff up!

The United States eventually managed to extradite Goldman from Israel. She pleaded guilty to two counts of attempted extortion and — once again — got probation.

Since then, Goldman has worked as a blogger and journalist. And in 2017, while Donald Trump was busy banning some journalists from the White House, Goldman somehow apparently managed to score White House press credentials. Go figure.

We reached out to Goldman to find out more about her newfound status as the go-to for quotes about Ghislaine Maxwell, Prince Andrew and Jeffrey Epstein. She did not reply to a request for comment.