There was already ample video evidence that proved the police narrative about what happened during the I-676 tear-gassing was untrue. It took a report from the New York Times for city officials to admit it. 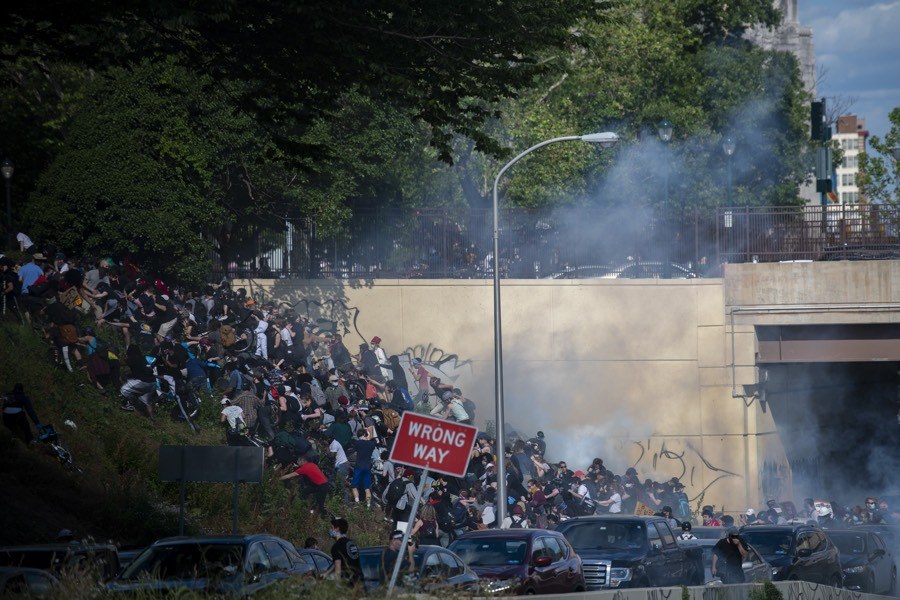 Peaceful protesters sprint up a hill after Philadelphia police shot tear gas at them on June 1st. Photo by Mark Makela/Getty Images.

When the Philadelphia Police Department tear-gassed protesters on the I-676 highway on June 1st, the third day of demonstrations in Philadelphia over the death of George Floyd, there soon arose a set of competing narratives. One came from the protesters, who said their demonstration had been entirely peaceful — an act of civil disobedience. The other came from the police, who claimed, in a statement issued by commissioner Danielle Outlaw that same night, that the protesters had violently swarmed a state trooper’s vehicle, had thrown rocks at the officers, and had refused to disperse, necessitating the use of tear gas and pepper spray. (Later, Outlaw would say that by taking the highway — a disruption of transportation that has a long and symbolic history in civil rights protests — the protesters were “not deemed peaceful.”)

Thanks to the hundreds of protesters who were shooting footage on their phones that day, it quickly became clear, from a stream of videos posted on social media, that the protesters had a considerable cache of evidence on their side: clip after clip showed a non-aggressive crowd that was met with police tear gas and pepper spray. The police claim, on the other hand, was supported by the word of the police.

On Thursday, 24 days after the tear-gassing, something unusual happened: The word of the police changed. At a press conference, called on short notice, Outlaw admitted that her initial statements defending the use of tear gas were “substantively inaccurate.” She blamed unnamed officers for relaying faulty information to her and said she’d seen new video evidence — published that day in an investigation from the New York Times — that made her “extremely disturbed and quite frankly sickened beyond description” as it showed officers “utilizing force instruments gratuitously and in complete divergence from our policy.”

If you had not been following this story in the past 24 days, Outlaw’s mea culpa might have sounded like a victory in the fight for police accountability — wasn’t this a police department unafraid to admit its mistakes and take responsibility for its actions?

Actually, not so much. The press conference was far from a benevolent display of accountability; it was more like a crisis public relations maneuver, the same one you’ve seen over and over again with police departments across the country. They act improperly, they provide a misleading narrative, and then they pledge investigations. If someone prominent enough happens to uncover wrongdoing or inconsistencies, only then do the police apologize — after they were dragged headfirst over the line.

This is precisely what happened over the past three and a half weeks. In the days following the tear-gassing, local journalists unearthed ever more evidence that supported the protester narrative and disputed the police account. The police claimed that protesters had cornered and rocked a state trooper vehicle; a WHYY report found no evidence of that fact. The police claimed protesters threw rocks at officers; an Inquirer report found no evidence of that, either. All this time, the police remained quiet. Only when the largest newspaper in the country started poking around did they reverse course.

At Thursday’s press conference, Commissioner Outlaw prefaced her remarks, “As recently as today, I have viewed video posted by the New York Times,” directly suggesting that the video report led her to change her mind about what transpired in early June. If this is true, it inspires very little confidence in the investigatory capacity of a police department that has had a full 20 days to look into the tear-gassing. Much of the footage compiled by the Times has in fact been circulating online since that very day. In one notable example, the Times played video footage from a protester named Sunny Singh; Singh, it turns out, had posted what looks to be identical footage on Twitter on June 3rd. The post, retweeted a thousand times, directly tagged Mayor Kenney. There was every opportunity, whether through publicly available video or the local media reports that followed the tear-gassing, for the police to gather enough evidence to reach the conclusion that the initial narrative was a lie. But it didn’t.

There were other signs of faux-accountability on display at the press conference. Outlaw announced a new moratorium on the use of tear gas, stating that the chemical agent could now only be used “in the case when we are confronted with an armed or dangerous individual.” Only this means next to nothing, when you consider the fact that, according to the false police account of June 1st, there were armed and dangerous individuals — the individuals allegedly throwing rocks at officers. This suggests what protesters have been saying all along: Changing protocols will do nothing to improve police behavior, because police act first, then craft a narrative to justify their actions after the fact.

Outlaw also announced that Dennis Wilson, the officer who signed off on the use of tear gas on the highway, would be voluntarily accepting a demotion to his previous position of chief inspector. Outlaw nobly described Wilson as “falling on his sword.” A better description would be to say that Wilson has taken a demotion to a position that, assuming he is to be paid at the same rate as all other current chief inspectors on the police force, will still net him a salary in excess of $145,000.

More concerning still is the fact that Wilson admitted he directly breached protocol. He was supposed to call Outlaw before any deployment of tear gas. “We had several conversations,” Wilson admitted at the press conference. “Commissioner Outlaw wanted me to call her prior to using any CS gas. … I did not do that during the protests on 676.” He added, “I gave the approval and it was me, and me alone.”

This revelation suggests that Outlaw herself was obfuscating back on June 2nd, when she gave her first in-person response to the tear-gassing. That day, reporters sought to find out who gave the official command to tear-gas the protesters, and if protocol was followed. The city’s response was convoluted; Kenney himself at first seemed to suggest he signed off on the gassing. Later, the city said Kenney was only made aware of the gas after the fact, though he had separately approved a different tear-gassing the day before, at 52nd and Market Streets in West Philly.

But Outlaw declined at the June 2nd press conference to mention the fact that protocol had been breached — even though if what Wilson said is true, she would have known straight away. Instead she said, “The decisions to deploy gas are made by the incident commander there on scene. I’m not going to say names at this point. … It will be fully investigated.” She continued, “Whether or not there was clear or proper supervision during that incident will be handled as well.” Rather than admit to the glaring mistake, Outlaw hid behind the bulletproof vest of internal investigation.

The police will claim that all of these details would have come out eventually, as a result of their various investigations. (In addition to the police investigation, the city is commissioning an external review of its response to the protests.) Given the total silence so far, you could forgive protesters for not taking the police department at their word. At any rate, that’s not what true accountability looks like. Accountability is owning up to mistakes once you know they’ve occurred. What it most certainly is not is refusing to admit fault, even when faced with considerable evidence, until the national media drops an embarrassing report that finally forces your hand. One wonders what we would have ever heard from the police department had that not been the case.