Plus: Wanna have a big wedding? Go to Delaware. 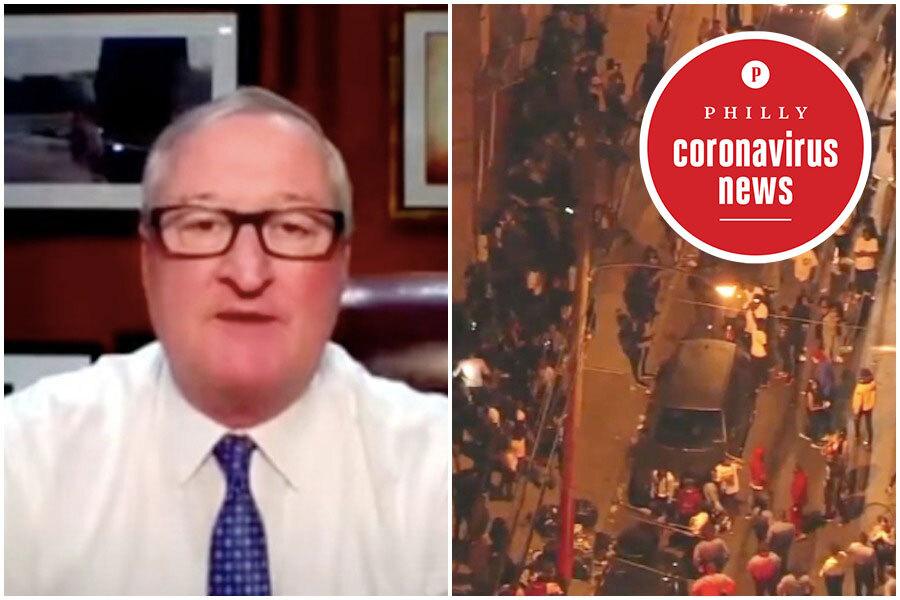 Left: Philadelphia Mayor Jim Kenney at a press conference on Tuesday, where he said that he wants to “reason” with people who ignore coronavirus orders and guidelines, not make “mass arrests.” Right: An overhead shot of a massive block party on Memorial Day in Philadelphia. (Image courtesy 6ABC).

This week, Kenney is trying to appeal to the morals, ethics, and just general humanity of city residents when it comes to following coronavirus orders and guidelines.

During a Zoom’d press conference on Tuesday, a reporter asked Kenney about Monday’s big Memorial Day block party in Brewerytown, where it took the Philadelphia Police Department more than an hour to disperse a crowd of 200-plus people who had gathered for a party, complete with a DJ.

“We have to continue to talk to people and communicate with people,” Kenney said. “It’s their responsibility to keep this going in the yellow and green direction as opposed to into the red and staying in the red. It’s difficult with a large group of 200-plus people to make mass arrests and that’s not something we’re interested in doing. It would cause severe strain on our police department.”

“We continue to hope to reason with people,” he continued. “There are gonna be folks in our society that are gonna ignore it and do what they’re gonna do. We gotta try to break up these things without putting police in harm’s way or creating any kind of disturbance. I don’t have a magic theory or magic answer.”

Is the November Election in Philly in Jeopardy Due to Cutbacks?

You think your Zoom meetings are painful and awkward? You should check out City Council meetings, where our City Council members are still trying to figure out how the damn thing works.

Anyway, on Tuesday, City Council held one such Zoom meeting regarding Mayor Kenney’s controversial budget proposal, which seeks to make all sorts of painful cuts, including to the Office of the City Commissioners, a.k.a. the people in charge of running elections in Philly.

Commissioner Lisa Deeley told City Council that these cuts could have a major impact on the city’s ability to hold an election at all come November.

“With the current budget that we have going on right now, we could be in danger of not being able to have the November election,” Deeley said.

Not so fast, says Mayor Kenney. At his aforementioned Tuesday press conference, Kenney said that his office is still hashing out the details for the upcoming June primary and the general election in November.

“But there will be an election in June and in November,” Kenney insisted.

If you’re tired of all of Philly’s coronavirus restrictions, maybe you should move to New Jersey or Delaware.

While Philly remains under some of the strictest orders and guidelines in the entire nation, The Garden State and The State That Is Only Good for Buying Alcohol When Your Local State Store Is Closed (sorry, I have no idea what Delaware’s “official” nickname is, and mine is certainly more apt) continue to loosen up.

Delaware Governor John Carney just announced the latest phase of his reopening plan, scheduled to begin on Monday. If you’re coming in from out of state, you no longer have to self-quarantine for 14 days. If you want to have a wedding, that’s perfectly fine, as long as you limit it to 250 or fewer people and keep it outside. And restaurants can welcome dine-in customers again, though with some pretty significant restrictions on capacity.

And in New Jersey, Governor Phil Murphy is now allowing professional sports teams to practice and train indoors. His office is also finalizing a plan to allow colleges and high schools to conduct outdoor graduation ceremonies. And, of course, the beaches are all open.

As for Philly, Governor Tom Wolf has said that the city and its surrounding counties could shift into the less restrictive yellow phase as of June 5th. The key word being “could.” Block parties of 200-plus people probably don’t help our cause.