I Won’t Vote for Joe Biden, the Lesser Racist, Until I Have To in November

No, I'm not supporting Trump. But I just can't bring myself to vote for the presumptive Democratic nominee — who has his own history of racism — in the Pennsylvania primary. 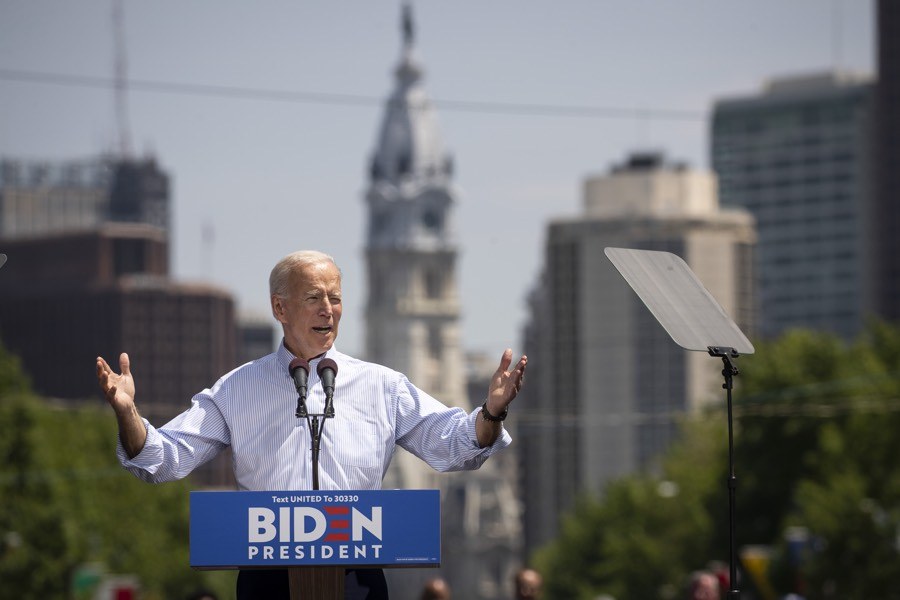 Joe Biden during a campaign kickoff rally, May 18, 2019, in Philadelphia. (Photo by Drew Angerer/Getty Images)

As a millennial black voter, I take every election very seriously.

When my mail-in ballot arrived last week, it listed three Democratic presidential candidates: former vice president Joe Biden, Vermont Senator Bernie Sanders, and Hawaii Congresswoman Tulsi Gabbard. None of these were among my top picks when the primaries began. My perfect-world ticket would have been a pairing of Julián Castro and Elizabeth Warren, neither of whom made it this far in the primary process. So as I’ve done for all elections, I voted for the candidate I felt was the best of the available options — the one who actually earned my vote.

I voted for Bernie Sanders, because Joe Biden has lost his damn mind.

Yes, I know that both Sanders and Gabbard officially suspended their campaigns long before I signed up for a ballot to arrive at my house due to COVID-19. But Sanders has pointedly stayed on the ballot in the remaining primaries in hopes of collecting delegates and clout come convention time. So as long as I saw another, better option on that slate, I made it a point to vote for that candidate. I wanted to send a loud, clear message that I would not be actively co-signing Biden’s disappointing Democratic nomination.

There is no way to put this other than bluntly: Joe Biden is a racist.

But compared to Trump, his racism isn’t quite so visceral.

Contrary to conventional wisdom, to be a racist, you need not don a Ku Klux Klan hood, yell the n-word abrasively, or boldly defend white supremacy with your chest out. And yes, racists can have friends and lovers of color, enjoy black culture, and give back to diverse causes — because none of that can absolve them of problematic behavior. This also means that both Democrats and Republicans can be racists regardless of how actively they support certain political ideologies.

Racism can be as simple as white people socially, institutionally and/or culturally promoting ideas or enforcing norms that systemically benefit them above other races. Because white people are currently the politically dominant race — their centuries of global imperialism, colonialism and genocide have afforded them a disproportionate advantage over people of color — racism can’t be considered a two-way street.

Throughout his political career, Biden has proffered and supported a number of racist ideas and policies. From co-authoring the 1994 Crime Bill to his infamous treatment of Anita Hill during her sexual harassment testimony during the Clarence Thomas confirmation hearings, Biden has a dicey past when it comes to interacting with black people.

In 2007, while running against Barack Obama in the Democratic presidential primary before becoming his running mate, Biden described Obama as “the first mainstream African-American who is articulate and bright and clean.” Yeah, I don’t even think I need to explain how racist this is in 2020. (Okay, maybe I do. … ) Biden would later apologize, but remarks like that don’t just come out of nowhere.

In 2019, Biden touted his ability to work with segregationist Southern senators decades ago to “get things done” while bemoaning that “at least there was some civility” in the Senate back then. That statement, coupled with the fact that Biden sought the support of racist senators such as Strom Thurmond and John Stennis (who were against the civil rights movement), is another bad look. Again, Biden would later apologize for his remarks as backlash mounted.

Last week, the cycle continued as Biden had to apologize yet again after stating during a radio interview that if you are black and support Trump, “then you ain’t black.” Regardless of whether the remark was made “in jest” or one could understand the rationale behind the statement, Biden, a white man, has no business defining who is or isn’t black. Biden would later say he had been “much too cavalier” in his remarks, but I wonder what made him feel entitled to such arrogance in the first place?

As expected, Democrats of all races came out to defend the 77-year-old white man’s latest racist gaffe. In a nutshell, Democrats like me who cringed at Biden’s remarks were reminded that Trump was far worse — something we all already knew a thousand times over.

I agree, Trump is worse than Biden. But if we are playing the “lesser of evils” game, that would simply make Biden a lesser racist than Trump. A racist is still a racist, and I couldn’t bring myself to reward bad behavior by voting for Biden in the Democratic primary. After two previous failed attempts, Biden will — barring some new revelation — finally get the Democratic nomination for president this summer. It will be anti-climatic and perhaps the most disappointing candidate selection process in the Democratic Party’s recent history.

Going to the polls in November will be a decision between bad and slightly less bad, not a choice between oppression and liberation. Biden has made it clear that he will be a staunch moderate on policies (such as his opposition to Medicare for All and his pandering to the super-wealthy) that will still oppress, albeit just a bit less than Trump’s. Biden’s not about raising the bar. He’s about taking the bar, which Trump has buried six feet deep, and putting it back on the floor. Groundbreaking.

I will vote for Biden in November because there will be no other viable option for defeating Trump. For many Americans, this is all that matters. But for black millennial voters like me who aren’t willing to be shills for the establishment, all of this speaks to a bleaker future for American politics.