"We've done what they told us to do," says barbershop owner Nichole Missino. "It's time to let us back to work. And if they won't do that, we'll do what we have to do." 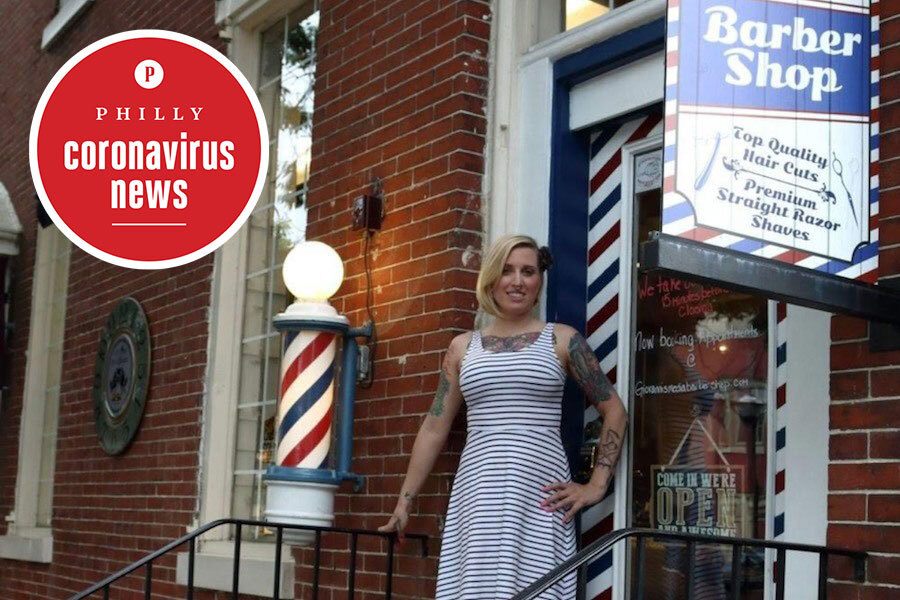 Nichole Missino in front of Giovanni’s Barbershop in Media. She says she’s reopening her business next week, even if the coronavirus shutdown is still in effect in Pennsylvania. (Photo courtesy Nichole Missino)

Dr. Anthony Fauci, the country’s coronavirus czar, has warned the nation against reopening too soon, saying there could be “serious consequences.” And here in Pennsylvania, Governor Tom Wolf has laid out a data-based plan for reopening the commonwealth in phases, backed by the state’s top public health official, Pennsylvania Health Secretary Rachel Levine. But some business owners say enough is enough, and they are readying to open anyway.

Collin Whitney, owner of the Conshohocken gym PWRBLD, told 6 ABC that he’ll be reopening this Monday in defiance of the state order.

“We’re kind of at the end of our rope unless we do something,” Whitney said. “We’re going to be out anyway… Initially we were on board. [But then] the two-week shutdown, then the month shutdown and then the shutdown just continued to be extended, and it seemed like small businesses were told ‘just wait.’… The gym and training people is what pays the bills, keeps food on the table, keeps a roof over my head, so without that where are we left?”

If ever there were a time to remind people to wipe down gym equipment after using it, now would seem like a pretty good opportunity. But at least in the gym world, you don’t have to be right on top of other people who are working out. Not that we’re suggesting that gyms just go rogue and reopen, but you could maintain social distancing.

Not so much in a barbershop.

Nichole Missino, the 39-year-old owner of Giovanni’s barbershop in Media, tells Philly Mag she has a full book of appointments for next Wednesday, the day she plans to reopen. Missino was supposed to relaunch last Saturday but instead turned that into an opportunity for a “Reopen Pennsylvania”-style rally outside her shop. This time, she says she’s serious. Wednesday or bust.

“We’ve done what they told us to do,” insists Missino. “It’s time to let us back to work. And if they won’t do that, we’ll do what we have to do.”

Missino’s reopening plan includes lots of measures that she claims will minimize the chance of a client or barber getting the coronavirus while inside Giovanni’s. Extra cleaning. Clients waiting in cars for their appointments instead of in the waiting room. Face shields like this one, which Missino is modeling: 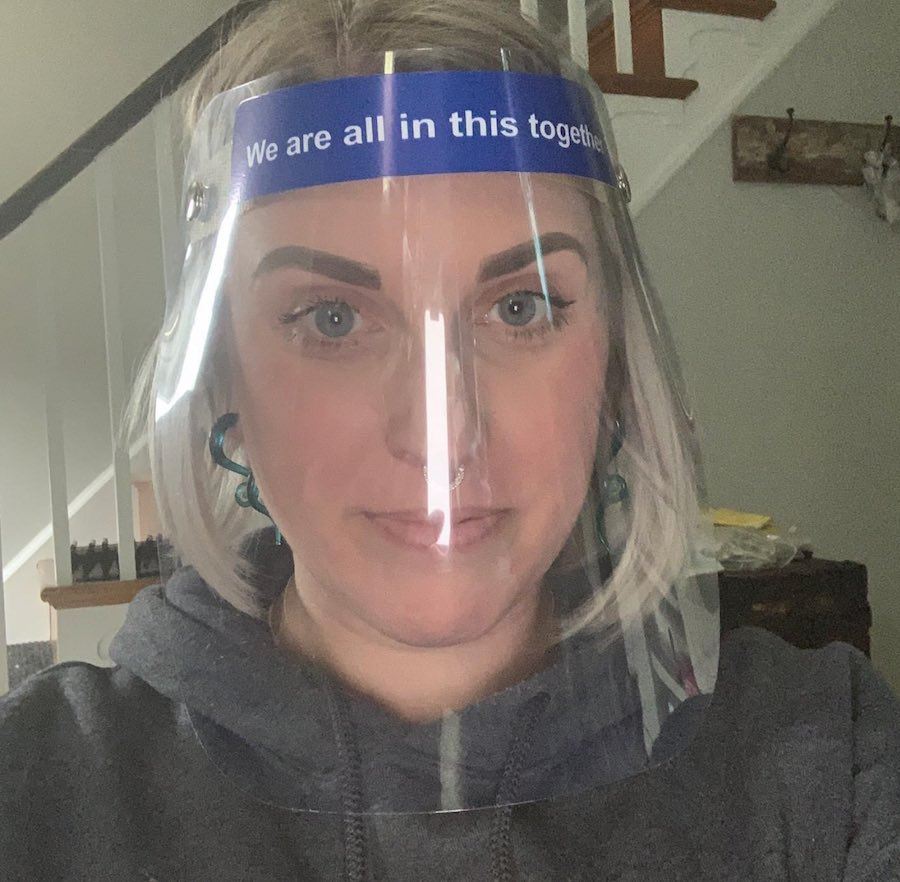 Nichole Missino in the face shield she bought to wear inside Giovanni’s barbershop in Media once she reopens. (Photo provided by Nichole Missino)

But still, if you’re doing a straight-razor shave on a client — that’s $30 at Giovanni’s — you are getting up close and personal on the client’s face. Or even just a haircut — $25, please — you’re still touching the person.

We certainly understand Missino’s need to open. After all, there are bills to be paid. Her barbers haven’t worked in two months. And we all know what a colossal mess Pennsylvania’s unemployment system has been. But is Missino really qualified to make a decision that flies in the face of what the experts are telling us and one that could impact public health?

“In the beginning, they said everybody should be closed, and I was like 110 percent all for it,” Missino says. “But as time went on, we saw who was at risk of dying… Most of the deaths in Pennsylvania are in nursing homes. So you are telling all of these healthy people to stay in the house. What we should be doing is restarting the state while sheltering the elderly and the immunocompromised.”

OK, but about those qualifications…

“Listen, what I don’t think people realize is that a barber has to go to school and get a license from the state,” she explains. “And there is a whole chapter in the book on infectious diseases… Coming into my barbershop is a lot cleaner than going into a Walmart.”

The revolt is also brewing in the bar and restaurant industry. While legislators in Harrisburg were working on a bill to allow takeout cocktails in Pennsylvania (it passed the Senate and awaits Governor Wolf’s signature), more than a few restaurants in Philly started doing it illegally. Weeks ago. And one local bar owner we spoke to, who asked to remain nameless, says he is opening his shuttered bar on June 1st no matter what.

“Do you have any idea how much it costs to keep this building on?” he says. “I haven’t sold a drink since March. They can come and fine me if they want to. I’m opening.”

On Thursday, the City of Philadelphia and the Philadelphia Industrial Development Corporation (PIDC) released lists of all of the local businesses that have received money from the local coronavirus relief fund.

Some are zero-interest loans of up to $100,000. Others are straight-up grants of up to $25,000. And we saw some familiar names on there, including a Michael Solomonov restaurant. Fancy Rittenhouse boutique Joan Shepp. Nuts to You. Dirty Frank’s. We could go on, but you should really just check out the full lists here.

It’s great that the city disclosed this information. But what we also wanted to know was: Who didn’t get the cash? After all, understanding who didn’t get it helps us to understand and analyze who did. But the city won’t give up that list.

“We will not be providing a list of businesses that were not approved as to respect their privacy since they were not recipients of public funds,” explained a spokesperson for the city’s Department of Commerce.

Protecting privacy is one way of looking at it. Preventing transparency is another.

One local entrepreneur who was denied a grant says that she’d like to see a list of the others who were denied.

“I know other small business owners who didn’t get it,” she told Philly Mag, under the condition of anonymity. “And they did everything right. It makes me mad… And I see plenty of wealthy people on there.”

The way things were going a couple of weeks ago, it was hard to imagine pulling up a beach chair and reading a beach read at the Jersey Shore over Memorial Day Weekend. But times seem to have changed.

For one thing, you’ve got some beaches opening for sunbathing and other lounging activities this weekend, as opposed to simply allowing people to walk on the beach, as had been the case.

And now, New Jersey Governor Phil Murphy says that the Jersey Shore will be open.

“The Jersey Shore will be open in time for Memorial Day Weekend, with social distancing guidelines in place,” Murphy tweeted on Thursday. “The shore is central to our Jersey identity, and we want to ensure that families can safely enjoy it this summer.”

Social distancing guidelines will be in place. And restaurants can only do takeout. But it’s a start.