Plus, Phillies season could open in June at Citizens Bank Park and takeout cocktails may be coming soon. 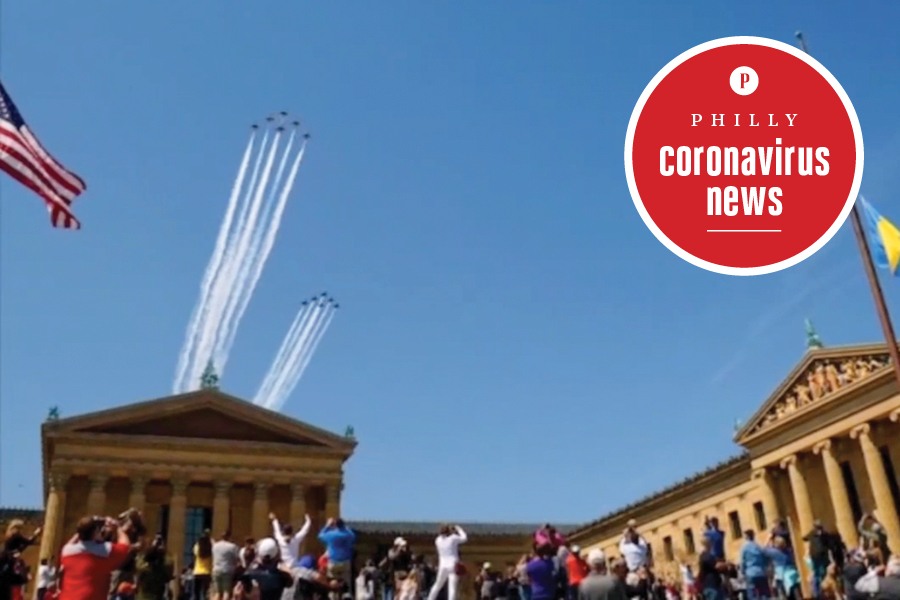 You want to know how to basically guarantee that lots and lots of people will violate the coronavirus stay-at-home order? It’s really very simple. You just organize a flyover featuring some of the most impressive fighter jets in the world.

On Tuesday afternoon, thousands of Philadelphians took to the streets, parks and local landmarks in clear violation of the stay-at-home order to see the Blue Angels-Thunderbirds joint flyover of the city. From Penn Treaty Park along the Delaware River to the Art Museum steps to the Chili’s parking lot on City Avenue in Bala Cynwyd, crowds gathered to witness the spectacle.

The flyover (seen in this video as the jets flew by the Philly skyline; video courtesy Brittany Tsoflias) was a lovely gesture, intended to pay tribute to the first-responders and medical workers who are sacrificing so much to get us through the coronavirus crisis. But when you want people to stay at home — and officials did tell people to stay at home for the flyover — maybe having a once-in-a-lifetime type of event that is best witnessed from wide open areas (as opposed to your little front stoop) is not the way to go.

(P.S.: I’ve seen more than a few such flyovers, and this one wasn’t even very good.)

Phillies Season Could Open In June at Citizens Bank Park

The Phillies were supposed to play their home opener on April 2nd at Citizens Bank Park. Obviously, that didn’t happen.

But according to various reports, the Phillies might still get to play at Citizens Bank Park this year. Major League Baseball is reportedly considering a plan that would allow teams to play in empty stadiums. The kickoff for this, if it all comes together, would be sometime between mid-June and the 4th of July.

No word on who the Phillies Phanatic will run around and try to annoy if the stadium is empty.

Takeout Cocktails May Be Coming Soon Amid Coronavirus Shutdown

It is illegal for bars and restaurants to sell takeout booze. But it looks like that is about to change, thanks to a bill that is making its way through Harrisburg and expected to pass into law any day.

Bars that already had the required permit to sell takeout beer and wine have been allowed to do so since the shutdown began. But this would let them sell you a gin and tonic, Long Island iced tea, daiquiri — whatever!

Alas, you probably won’t be able to walk down Walnut Street with a martini in your hand this time next year. The bill specifically says that this would only be temporary. So keep that flask handy.

Apparently, golf courses have been closed all this time. I didn’t realize this, because I drive by a Philly golf course almost every day, and every time I do, there are golfers there doing their golfing thing in their silly golfing clothes.