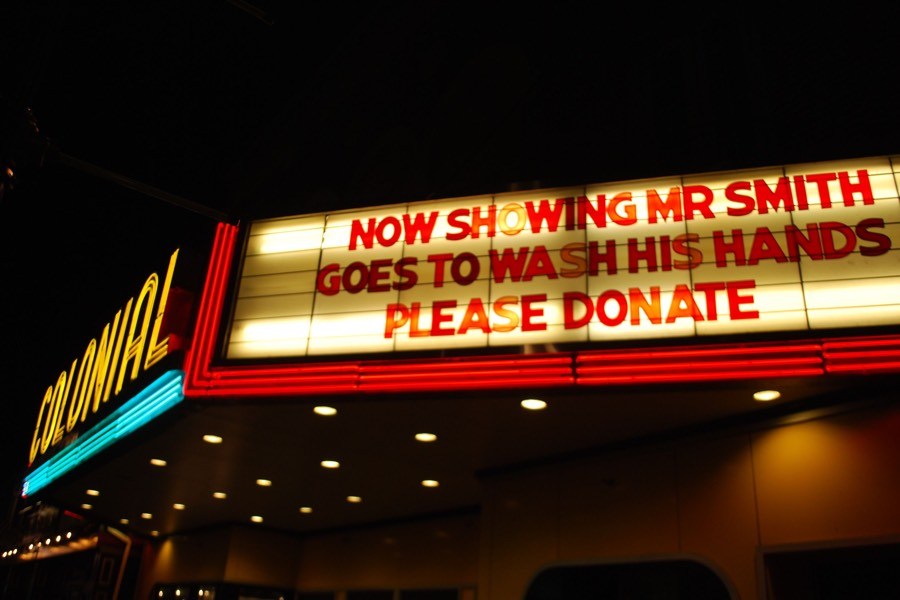 One of the major casualties of our modern age has been the pun. Once treasured as the product of quick and lively minds (see: Dorothy Parker, Oscar Wilde, Groucho Marx), the mighty pun has been made obsolete by the rise of search engine optimization, which relies on clarity and — horrors! — literalness. What a boring world our webmasters are making for us. Did no one — no one — note the “Molar Report” headline on Philly Mag’s Top Dentists feature in March? No, because the clever print headline died on the online vine and became “After Years of Neglect, I Finally Faced My Fears and Went to the Dentist.”

Which is why we got so gosh-danged excited when we learned that the art of the pun is alive and well and living on the olden-days marquee of the Colonial Theatre in Phoenixville. Firmly in the school of “It’s okay to have fun even in the midst of a pandemic,” the theater’s managers earlier this month began posting punny plays on the names of movies on the marquee: No Close Encounters of Any Kind, Mr. Smith Goes to Wash His Hands, Don’t Stand By Me. Encouraged by the positive response, the theater created an online contest for more such entries, and drew 400 punny ones in the first week, including Scarf Face, Shakespeare in Gloves, and Good Will Hunting for Toilet Paper. Suck on that, Mr. SEO! (The winning titles are photoshopped onto the marquee, since social distancing excludes the usual two-person team with a ladder.)

The Colonial, which is also offering virtual screenings of such prime quarantine fare as the popular Cat Video Fest, is accepting title suggestions via a Google docs form, so put on your punniest hat and get thinking. Hey! Your winning entry could go … viral!