Fox News commentator Tucker Carlson ripped into the school, which was supposed to get close to $10 million, noting that Penn president Amy Gutmann's salary is nearly a third of that. 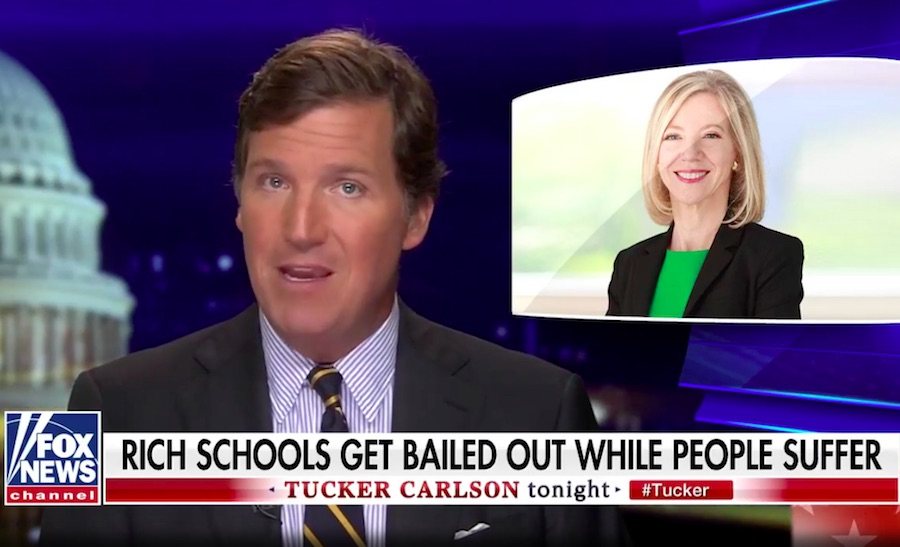 Fox News commentator Tucker Carlson rips into University of Pennsylvania president Amy Gutmann and the school, which was supposed to get close to $10 million in college stimulus money. (Screenshot via Fox News)

The University of Pennsylvania found itself in a similar boat this week.

Earlier this month, we learned that the University of Pennsylvania was supposed to get about $10 million in college stimulus money. This raised some eyebrows — as did the college stimulus money amounts designated for other wealthy institutions — since the University of Pennsylvania has an endowment of something like $14 billion.

“University presidents get to pay themselves and they pay themselves more than you might think, a lot,” said Carlson this week. “The University of Pennsylvania, a school for kids on the Harvard wait list, received $9.9 million. The president of UPenn, Amy Gutmann, makes nearly $3 million. That’s about a third of the entire bailout. If paying Amy Gutmann is such a priority, maybe the school could find that money in their $14.7 billion endowment.”

On Thursday, the University of Pennsylvania decided that accepting the college stimulus money wasn’t such an Ivy League idea.

You can watch the full segment of Tucker Carlson Tonight below:

On Monday, I told you about my laughably mind-melting saga trying to get some wine and booze via the PLCB’s curbside pickup program. Short version: more than 159 phone calls and lots of headaches.

Since then, I’ve heard from a number of folks from all over the state. They say they had similar experiences. Indeed, even in quiet Danville, Pennsylvania, people were having a ridiculous time, a resident of the tiny town told me. The mess was reported by Danville’s local paper, The Daily Item.

The Inquirer tells us that the PLCB now plans to expand the curbside pickup program to nearly all state stores. Mathematically speaking, more stores should mean more opportunities to place an order which should mean less headaches. But, this is the PLCB. So we’re just going to have to see how this goes. Good luck!

No, Philly Is Not Reopening on May 8th

Pennsylvania Governor Tom Wolf said on Wednesday that he’d start reopening Pennsylvania on May 8th. But if you’re thinking that this means Philly is going to reopen on May 8th, think again.

As we told you yesterday, Wolf intends to reopen some parts of Pennsylvania before others. And on Thursday, he clarified what this means for Philly and the surrounding area.

“We haven’t decided where we’re going to do this, but I’m pretty sure that the southeastern part of the state will be among the last places to reopen because, again, the goal here is to keep people safe,” Wolf said. “It’s not to impose unneeded, arbitrary restrictions on people’s freedom of movement. We’re trying to keep people safe. We’re being driven by the dictates of this virus. And if the virus is saying, ‘Hey, I’m feeling right at home here in Philadelphia,’ then Philadelphia is not ready to reopen. And I think that’s the kind of call that we’re gonna have to make.”