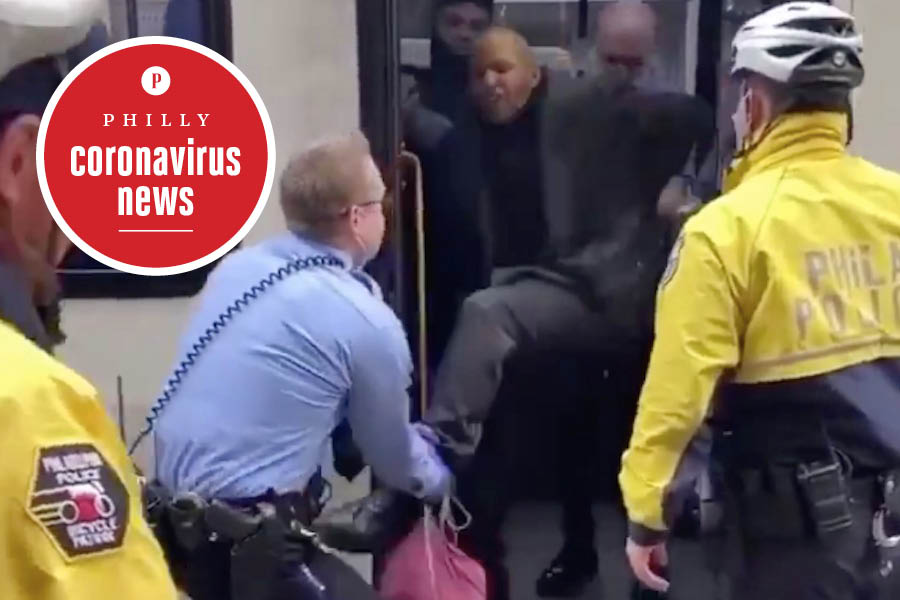 Police drag an unmasked man off of a SEPTA bus during the Philadelphia coronavirus crisis. (Screenshot via Philadelphia Transit Riders Union on Twitter)

With the coronavirus continuing to spread, SEPTA said that all riders must wear masks. That mandate came out on Thursday.

But then this came out on Friday:

do riders know that they might be pulled off a SEPTA bus by 10 cops for not having a mask? pic.twitter.com/NnHXJC02E8

We’re assuming you’ve seen this video of an unmasked man being dragged off of a SEPTA bus, purportedly because he was not wearing a mask or other face covering. Well over 10 million other people watched the infamous video over Easter weekend.

The video and the various accounts surrounding it made it to BuzzFeed News, the Independent in the UK, and New York mag.

The TL;DR version is basically something along these lines:

As of Monday morning, SEPTA says that officials are still investigating the incident. But the agency has changed its policy. SEPTA is no longer insisting that riders wear a mask. The word now being used is “urged.”

“SEPTA urges customers to wear facial coverings in an effort to help prevent the spread of COVID-19…” SEPTA spokesperson Andrew Busch told Philly Mag in a statement. “While SEPTA urges riders to cover their faces, those who refuse will not be barred entry to the system.”

Last week, a bunch of public health experts, prison reform advocates and activists fired off a letter to Governor Tom Wolf demanding that he release some inmates from prison, because the prison population is at a higher risk for coronavirus. Philly DA Larry Krasner joined the call as well. “The time to act in order to save lives was three weeks ago, but we can still prevent a lot of harm by acting right now,” Krasner said.

Then on Friday, Governor Wolf ordered the Department of Prisons to take action by releasing some prisoners. The reprieve program will focus on non-violent inmates who are 65 and older, those who are pregnant, any inmate with a serious, chronic medical issue, and others who are at a higher risk for coronavirus.

Vulnerable inmates will include inmates aged 65 or older; anyone with an autoimmune disorder; pregnant inmates; anyone with a serious, chronic medical condition such as heart disease, diabetes, chronic respiratory disease, bone marrow or organ transplantation, severe obesity, kidney disease, liver disease, [and] cancer; or another medical condition that places them at higher risk for complications of coronavirus as defined by the Centers for Disease Control and Prevention.

“We can reduce our non-violent prison population and leave fewer inmates at risk for contracting COVID-19 while maintaining public safety with this program,” Wolf said. “I am pleased to direct the Department of Corrections to begin the process to release vulnerable and non-violent inmates at or nearing their release dates in an organized way that maintain supervision post-release and ensures home and health care plans are in place for all reentrants.”

In Philadelphia, courts have reportedly released some 200 inmates over coronavirus concerns.

NASA has released images that show a drop in air pollution in Philadelphia and other parts of the northeastern United States.

The above GIF shows levels of nitrogen dioxide (that’s something you don’t want in your skies), first as an average of March levels from 2015 to 2019. And then those same levels in March 2020.

This drop mirrors similar drops in other parts of the world, including China. But officials have noted that they fully expect us to go back to our nasty, polluted skies once we kiss the coronavirus goodbye.