It was like the Mummers Parade, a rock concert, and a taste of good-ol’-boy Alabama fun all rolled into one. 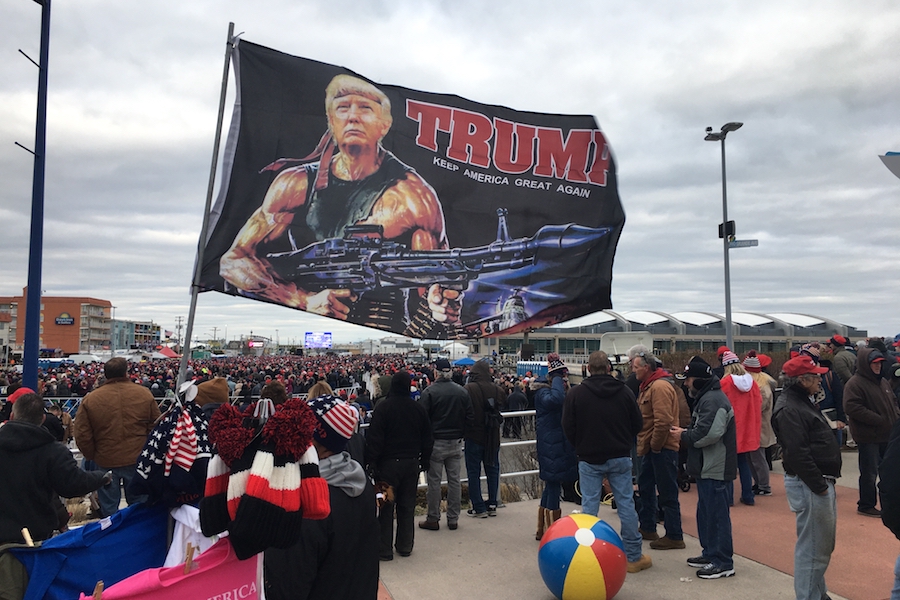 Donald Trump plays Rambo on a flag flying in front of the Donald Trump rally location in Wildwood, New Jersey.

If you look forward to off-season day trips to the Jersey Shore as a chance to relax, restore and reset, Wildwood was not that on Tuesday.

Instead, Wildwood was packed with thousands and thousands of Donald Trump fans, who showed up to attend his rally at the Wildwoods Convention Center on Tuesday night.

I had a ticket to the Trump rally — that’s it below, one of more than 100,000 that the campaign reportedly gave out — but, like many others in town on Tuesday, I didn’t make it into the 7,500-capacity building. 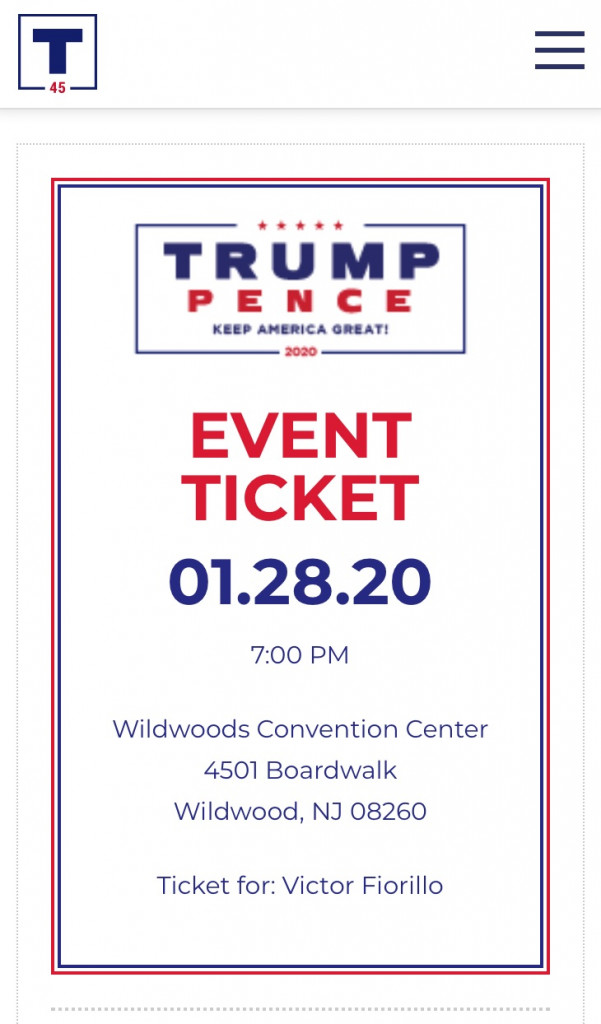 My ticket to the Donald Trump rally in Wildwood.

That was perfectly okay with me. I was more than happy to stroll around town and see what was going on. Here, some observations.

1. The protest at the Trump rally was pitiful.

There are a whole lot of people out there who think Donald Trump exists somewhere on the Evil Entity Scale between Idi Amin and Satan himself. Hell, you can count me as one of those people.

And yet, when said evil entity is holding a rally just 90 minutes from a progressive city like Philadelphia — it’s even accessible by public transportation! — this is the best we can do? 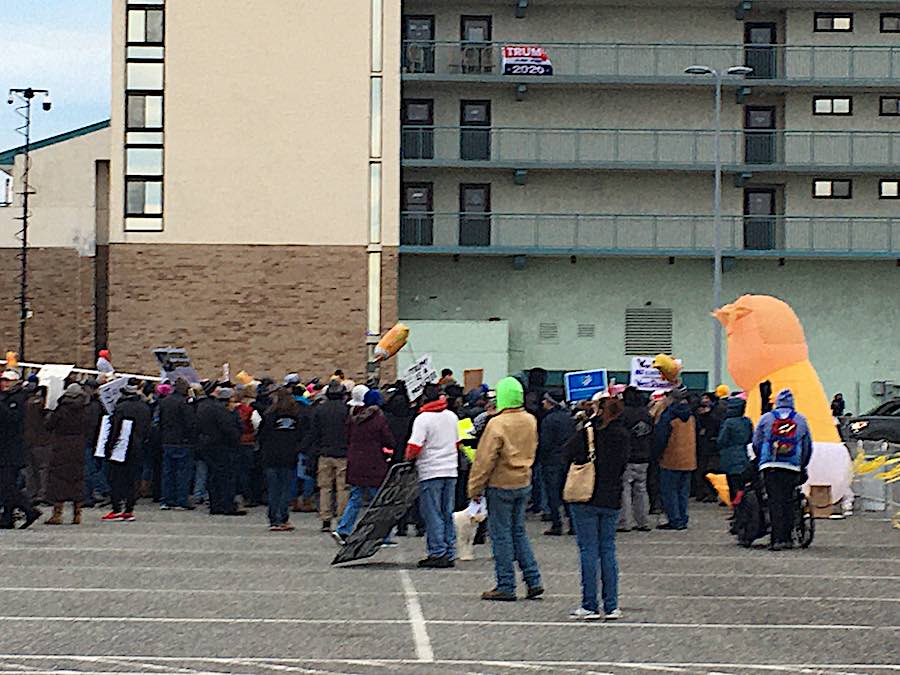 A group of protesters near the Donald Trump rally in Wildwood.

Protesters near the Donald Trump rally in Wildwood.

And here’s some video, which includes heckling by Trump supporters:

I mean, I’m pretty sure that I personally have this many anti-Trump friends and colleagues in Philadelphia. And the even sadder part is that according to one of the protest leaders who spoke, it was organized by more than 20 different groups. And this is what they came up with.

“Okay, it’s a weekday in January at the Shore, but given the stakes, that’s the best we could do?” said a friend of mine who attended the protest with his wife. “The Trumpets certainly came out in full voice and regalia, thousands without a shot at getting inside. [My wife] came away feeling like he’s going to win.”

2. Wildwood was the perfect location for the Trump rally.

If your exposure to Wildwood is limited to the occasional trip to the Boardwalk for rides and pizza, you may not realize that Wildwood is pretty damn conservative.

And keep in mind that Wildwood sits in Cape May County. Hillary Clinton may have won New Jersey in 2016, but she didn’t win Cape May County. Trump took the county with nearly 60 percent of the vote, while Clinton garnered only about 38 percent.

Just a couple of weeks ago, legislators in Cape May County passed a resolution declaring the county a Second Amendment “sanctuary.”

“Cape May County is a pretty Alabama-like place,” observes one of my colleagues.

Sure, there are plenty of nice people in Wildwood and Cape May County. But then there are those like the woman I met at a Wildwood bar. She lives in Wildwood. She works in a local retail store. And after I told her I was writing a story about the rally, she complained to me about the amount of “illegals” nearby thanks to all of the farms.

“When Trump flies overhead tonight, he’s going to look down and ask, ‘Is this Mexico?'” she jested. “And somebody is going to have to tell him, ‘No, Mr. President. That’s just Cape May County.'”

(Although I did love when the entire bar booed after Trump said something nice about former New Jersey Governor Chris Christie.)

Shortly thereafter, at a popular Wildwood restaurant I jumped over to, Trump’s speech was live on Fox News.

“We are now building that beautiful wall,” Trump said. And immediately, a woman at a table in the restaurant yelled out, “They should build one here!” Cheers and chants of “U-S-A, U-S-A” ensued.

3. Merch was everywhere at the Trump rally.

Whether you were on the streets or the Boardwalk near the Trump rally in Wildwood, you couldn’t go far without somebody trying to sell you Trump merchandise. It was really rather remarkable — just the sheer number of vendors and crap for sale. 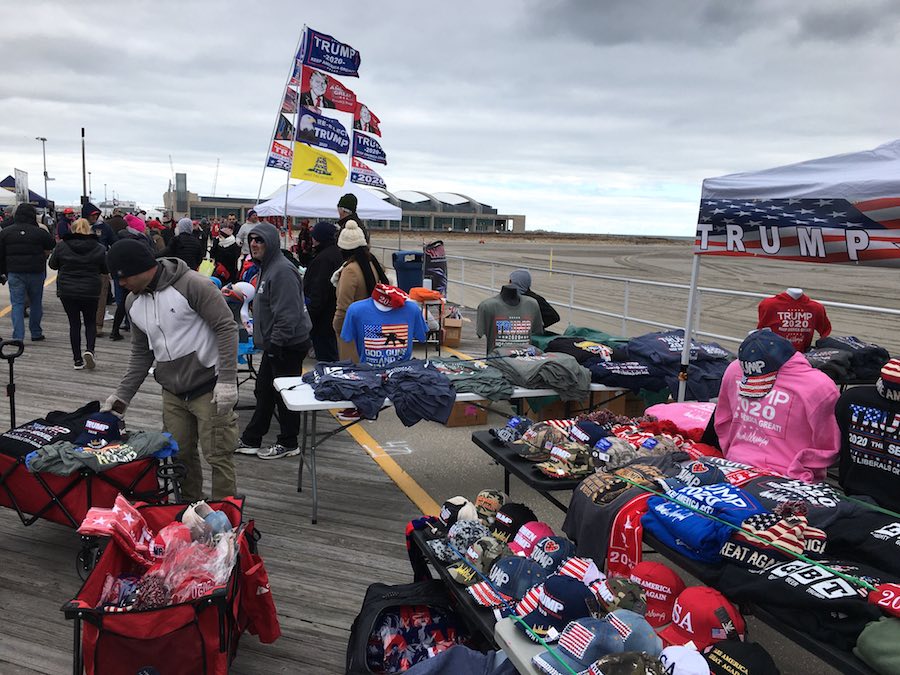 Merchandise for sale on the Boardwalk near the Donald Trump rally in Wildwood.

Whether you wanted a “Women for Trump” poster, a t-shirt mocking CNN (that’s Trump peeing on the news network, below), or something a little more, well, aggressive, like Donald Trump holding giant machine guns, they had it for you. 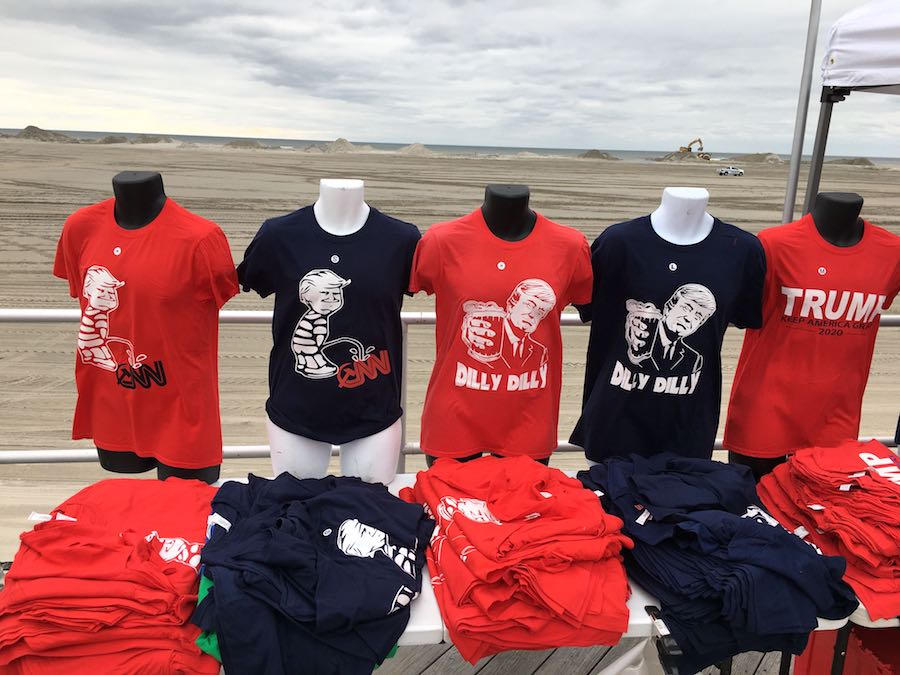 T-shirts for sale at the Donald Trump rally in Wildwood.

Sales didn’t seem to be too brisk. That was probably, in part, because everybody was already decked out in a lot of Trump gear, and also because people probably didn’t want to carry around a bunch of merch all day.

“This sucks,” said one vendor to another. “I’m not moving anything.”

Of course, he was selling Trump sunglasses. In winter. On a cloudy day. Apparently he didn’t graduate from Wharton.

4. The Trump rally was a lot like the Mummers Parade.

The crowd in Wildwood was almost exclusively white. Many were drinking, including openly on the streets. Some people were saying and doing offensive things. Plus, there was the guy pushing around a shopping cart selling cold, hard “soft” pretzels.

So, yeah, a lot like the Mummers Parade. Fight me on it.

5. The Trump rally was a lot like a rock concert.

The Trump rally was no different.

Trump supporters began camping out two days before the rally.

On a side street in Wildwood, I met a 17-year-old from Hammonton, New Jersey, who was carrying around camping gear, walking away from the Convention Center. (I blurred his face, because he’s a minor.) 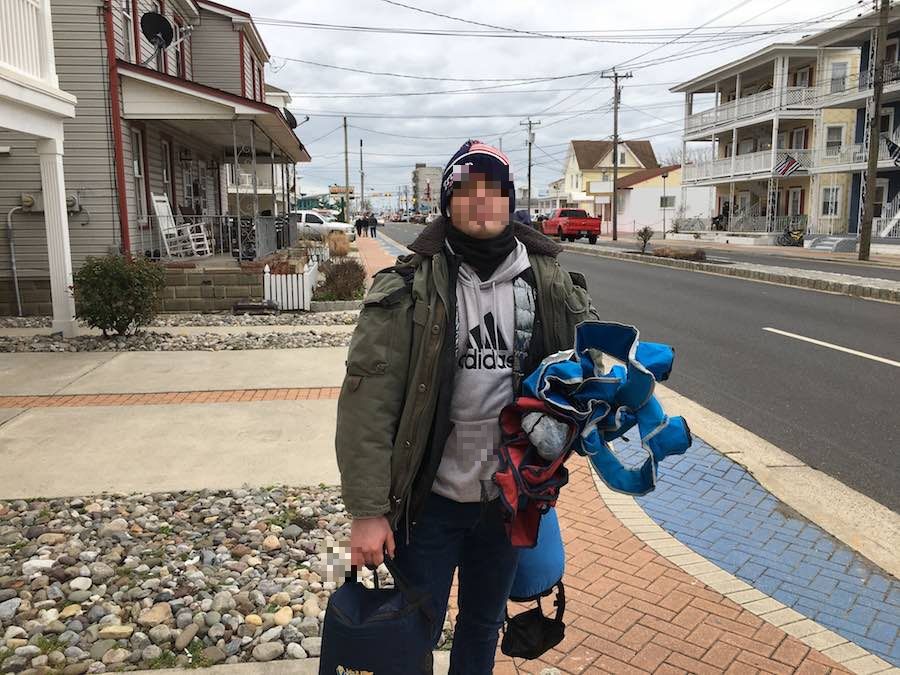 “Showed up too late?” I asked.

“Nah, man,” he replied. “I’ve been here since Monday morning. But since we’re going in soon, I have to bring all this stuff back to my car now.”

Somebody was holding his place far up in the very, very long line.

He’ll turn 18 in time to vote in his first election, and he’ll be voting for Trump. I asked him what he hopes to hear from Trump at the rally. He seemed to think about it for a moment, and then he shook his head.

“Honestly, I just really want to be in the room with the man,” he told me. “He’s like a rock star … I just hope that I get in.”

Hours later, he texted me this photo from his well-earned seat: 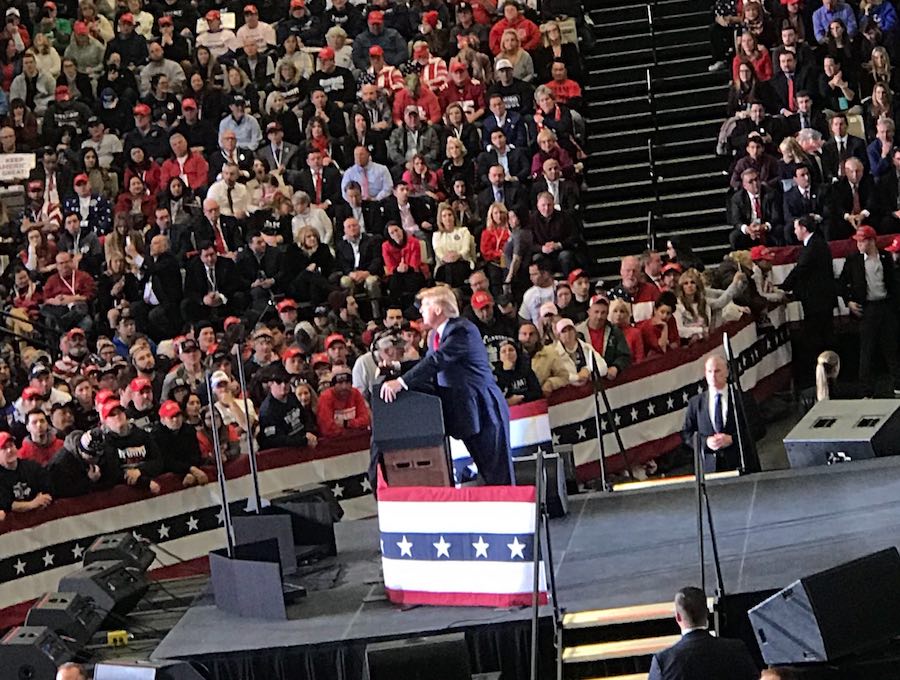 A 17-year-old Trump supporter’s photo from inside the rally in Wildwood.

And then I signed off for the night and went to bed, but I didn’t sleep well at all.