Sculptor Zenos Frudakis, who says his own politics are “left of Bernie Sanders,” believes removing the statue is a mistake and thinks he has the ultimate solution. Others aren’t so sure. 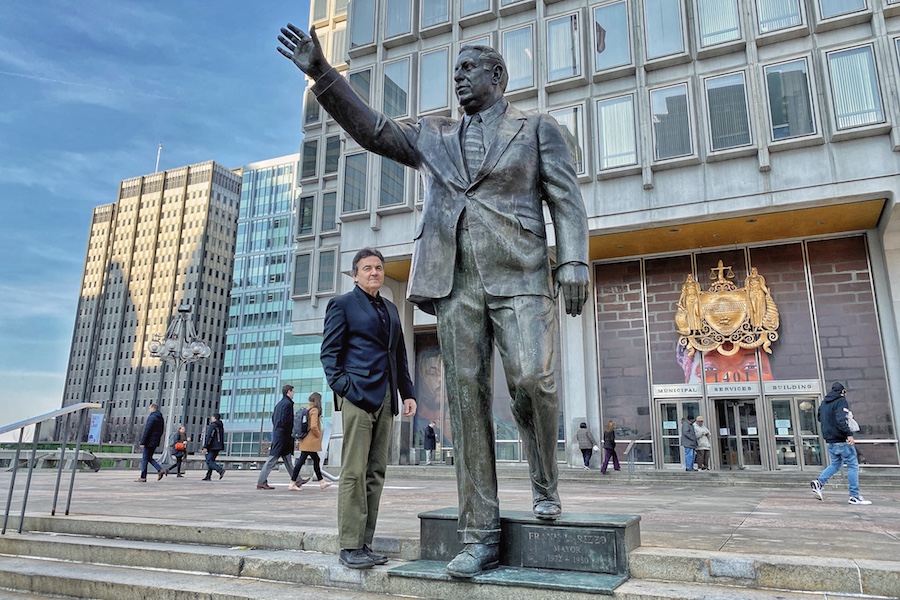 Frudakis, a San Francisco native, came to Philadelphia from Gary, Indiana, in the early 1970s to attend the Pennsylvania Academy of the Fine Arts and, later, the University of Pennsylvania, where he earned his BFA and MFA. So he was around during Rizzo’s controversial double term as mayor, which immediately followed Rizzo’s controversial tenure as police commissioner.

“I was a long-haired art student and saw exactly what was going on, and I didn’t like it,” Frudakis, 68, tells me from his Glenside studio. “Politically, I am to the left of Bernie Sanders, and I saw the way that Rizzo tried to keep minorities down. But removing the statue isn’t right. We should be using it to educate people instead of trying to erase history.”

So Frudakis proposes a different approach — a bit of a compromise, if you will.

First, he says we should leave the statue right where it is, prominently displayed on JFK Boulevard in between City Hall and LOVE Park, but explains that we need to add context to it — put up new plaques, for instance, that explain Rizzo’s mixed and polarizing legacies through the lens of the progressive city that we proclaim ourselves to be here in 2020.

And then, Frudakis suggests, we should build a “contrasting” statue — or even statues, plural — for the same location, a statue that would, as the sculptor puts it, “redefine” the Rizzo statue in that space. Leon Sullivan, the prominent Philadelphia civil rights leader and anti-apartheid activist who was around at the same time that Rizzo was ruling the city with an iron fist, is the first name that Frudakis threw out when I asked who the ideal subject would be.

Regardless of anything else, a Leon Sullivan statue sounds like a fine idea — all we currently have is a mural, and it’s all the way up in Nicetown — and we can get back to this concept of contextualizing and redefining the Frank Rizzo statue in a bit.

But what I really wanted to know first was: If Frudakis has always been such a die-hard liberal — I mean, there’s not much of a margin to the left of Bernie — why on earth would he have taken the job in the first place? How did that happen?

AFTER RIZZO DIED from a heart attack in 1991, supporters launched a fund-raising campaign to build a statue to honor their fallen hero.

Frudakis says he wasn’t their first choice, but when Plan A fell apart for whatever reason, he became Plan B.

He was on the group’s radar because he had created some busts of local civic leaders — a City Council president and a pre-MOVE-bombing Mayor Wilson Goode, for example. But this would be different. Those were mere busts, getting dusty somewhere and all but forgotten. This would be a literally larger-than-life bronze statue to be viewed publicly in the open air in one of the country’s largest metropolises.

“I had gotten a late start to my career,” Frudakis notes. “And the idea of having my work in the center of town sounded good. One leads to another, and now I have more than 100 statues all over the world. Plus, if I hadn’t done it, somebody else would have anyway.”

So Frudakis set aside his own politics and reservations and decided to proceed.

“One can be more high-minded when you are in a better position financially,” he adds.

Frudakis went through a box of more than 200 photos of Rizzo and privately picked the one he liked the best. Then he asked Rizzo’s son, Frank Jr., and widow, Carmella, to do the same. As Frudakis tells it, they all separately picked the same exact photo: Rizzo waving during a parade on the Ben Franklin Parkway.

The sculptor toiled away off and on in his studio, eventually producing a 10-foot-high bronze. 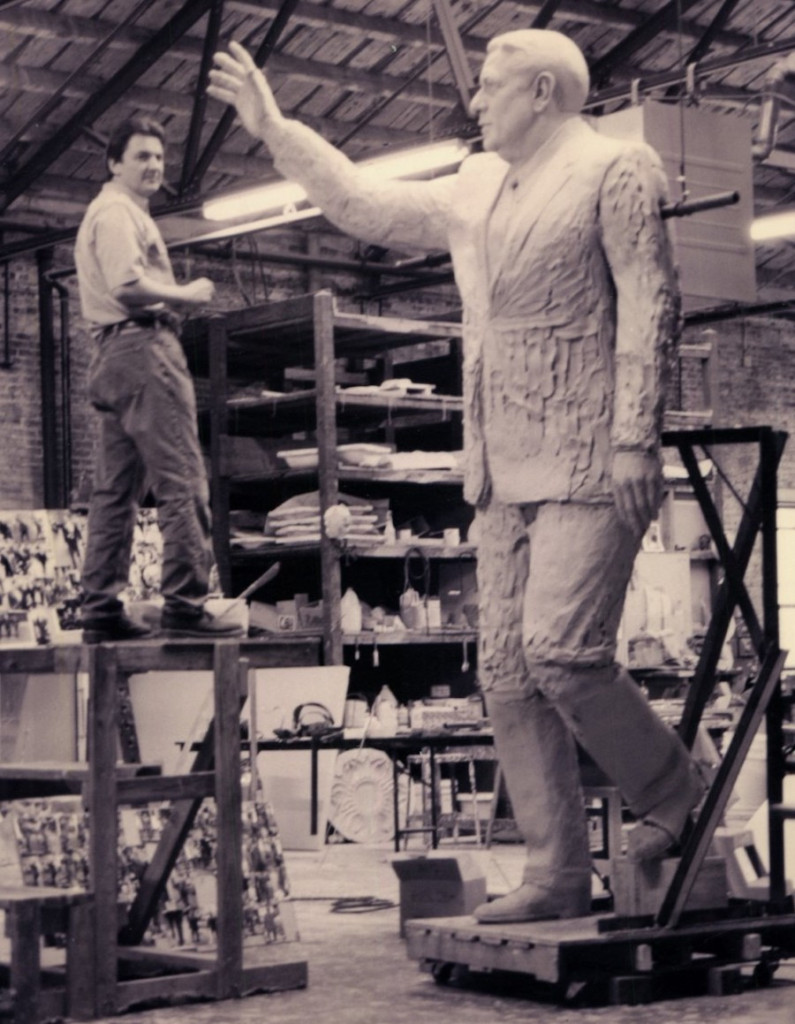 The Rizzo statue was set to be unveiled on January 1, 1999, immediately following the — what else? — Mummers Parade. At the end of 1998, prior to the official unveiling, city crews installed the statue, which was wrapped in a protective white material, as seen below. (Insert your own KKK joke here, Rizzo haters.) 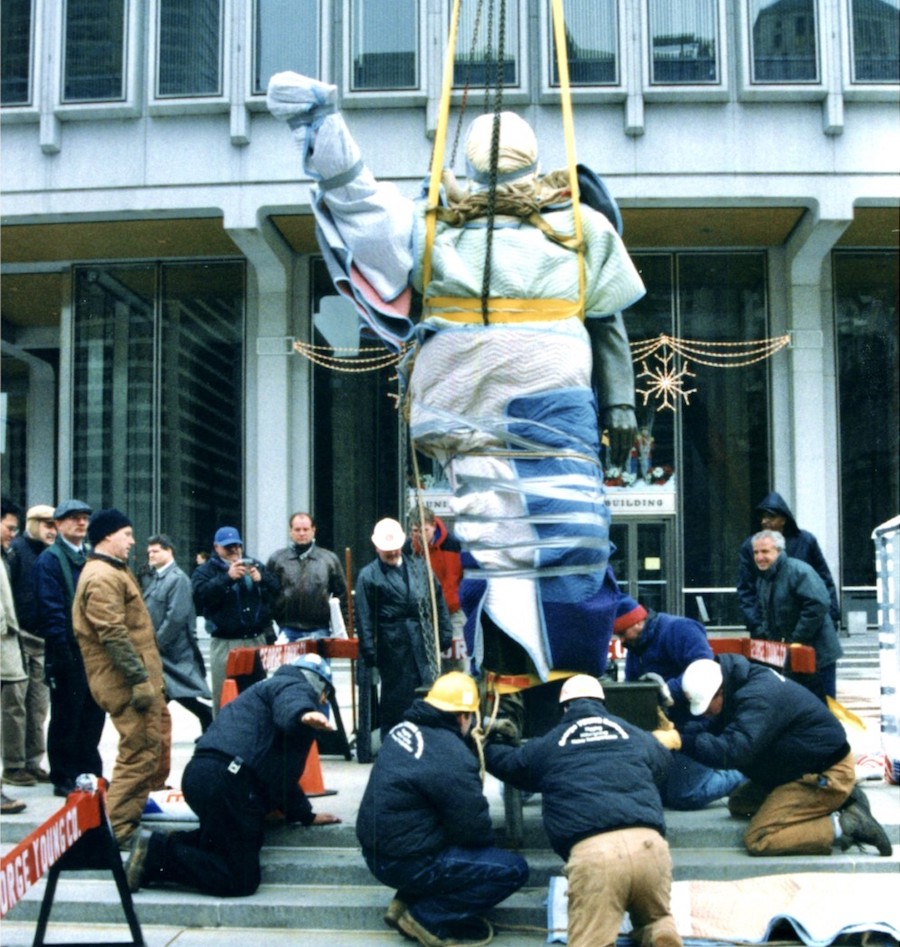 The Frank Rizzo statue being installed in Philadelphia in 1998. (Photo courtesy Zenos Frudakis)

While the installation was in progress, a news team from 6 ABC showed up and interviewed Frudakis, who admitted he was “nervous” about how the statue would be received. And 6 ABC reporter David Henry closed the segment by pointing out that the “statue would, no doubt, have critics of its own.”

THERE HAD BEEN PLENTY of complaints about the Rizzo statue over the years, but the push to actually do something about it gained significant traction in the mid-2010s thanks to activist groups such as Black Lives Matter.

Then, once Confederate statues started being removed around the country in 2017 in the wake of the infamous Unite the Right rally in Charlottesville, Virginia, the campaign to put the kibosh on the Rizzo statue, at least from Center City, became very real.

The removal of the statue seemed imminent, with Mayor Jim Kenney saying that it is “offensive to people.” Then the plan became more uncertain. Fast-forward to last October, when the city said it wouldn’t be removed until at least 2021. That’s when the plaza on which Rizzo stands is scheduled to be redesigned.

Kenney’s office is considering relocating the statue to South Philadelphia, where Rizzo still has many supporters. But South Philly is a much different place than it used to be, at least demographically speaking, and Philly’s government is more liberal than ever — hello, Helen Gym and Kendra Brooks – so it can’t really be assumed that the city will move the statue to public property anywhere in Philadelphia.

“I want it to stay right where it is,” says Jody Della Barba, Rizzo’s longtime secretary who helped spearhead the fund-raising campaign for the statue back in the 1990s. “What are we going to do, take down a statue every time that someone doesn’t like somebody? You have Jim Kenney and Helen Gym complaining about this. Well, nobody is ever going to build a statue of them, are they? Frank Rizzo broke the mold. He was an anomaly.”

In a column that appeared last December, I suggested that if Rizzo fans such as Della Barba think he’s all that, and if they really want the statue to avoid being melted down, they should raise a bunch of money to erect a Frank Rizzo Museum wherever the hell they want and move the statue there.

That’s when Frudakis entered my world. A representative of the sculptor reached out to me to see if I would be willing to hear his point of view.

“This is a chance to educate people,” Frudakis told me during a subsequent phone call. “People can learn from this.”

“YOU DON’T LEARN from a statue,” says University of South Alabama history professor Timothy Lombardo, a Philly native who wrote the 2018 book Blue-Collar Conservatism: Frank Rizzo’s Philadelphia and Populist Politics. “If you learn anything, you learn respect and awe.”

I ran the Frudakis proposals by Lombardo, but he wasn’t buying them.

“Whatever you do with the Frank Rizzo statue in that place, it is still going to ultimately honor him to the vast majority of people who walk by it,” he says. “The city is radically different than it was when he was mayor, and this is just a reminder of his dark past.”

“I can imagine an outdoor exhibit,” he says. “You’d need historians, community leaders, and others to do it. We would need to present a balanced understanding. Bring in the experts and the documents. Maybe the idea could be an overall history of Philadelphia in the 1970s and ’80s to explain what actually happened here when Rizzo was in power.”

But Tukufu Zuberi, the University of Pennsylvania historian from the PBS show History Detectives, isn’t having any part of it.

“If [Frudakis] wants it, let him put it in his house,” Zuberi tells me. “I don’t know who he thinks he is. Put it in his backyard. … I can’t stand here and imagine how to legitimately [justify] keeping a monument to him in this city. He is an absurd person to have as a symbol.”

I asked Zuberi what he thinks should take the place of the Rizzo statue.

Zuberi says that people who really want to learn about Rizzo shouldn’t go to the plaza, in whatever form it takes, but to the exhibit he’s curated at the Independence Seaport Museum. It’s called “Tides of Freedom,” and it examines the history of African Americans in Philadelphia. It also, notably, ends with a condemnation of Rizzo and how he impacted those same people.

“We put this white edifice up in spite of what he did,” says Zuberi of the Rizzo statue. “But those days are gone. People aren’t listening to that any more. Frank Rizzo doesn’t deserve to be remembered.”