These Are the Worst People You’ll See at Thanksgiving 2019

Yes, the relative who shows up with the Cupcake wine is most definitely on this list. 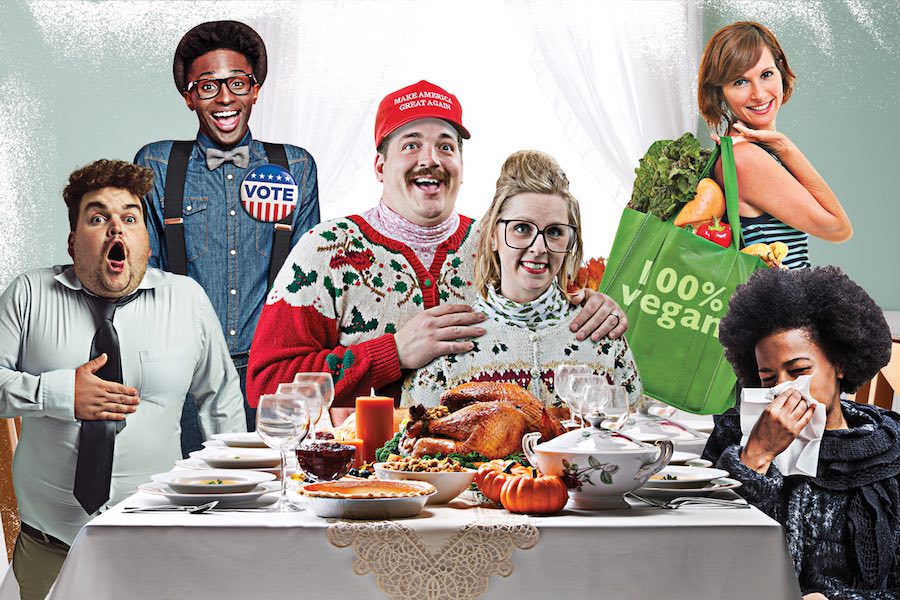 These are just a handful of the worst people you’ll see at Thanksgiving 2019.

The turkey’s been basted. The pies are all baked. The bar is fully stocked. And the house is in tip-top, immaculate, sparkly clean shape. The only thing left is for your guests to show up and ruin it all. Here, the worst people you’ll see at Thanksgiving 2019.

We all have one of these in the family — you know the type. It’s usually a male who was alive during the Truman administration. The platters make their way around the table. He fills his plate. And then? It’s right for the salt shaker, which he uses to coat the food you worked on all day with a substantial layer of sodium and always before he’s even tasted a bite. Ironically, he’s probably the one person at the table whose doctor keeps saying “Watch your salt intake.”

Honestly, I couldn’t care less about the time that you spent Thanksgiving in Napa dining on foie gras–stuffed free-range heritage turkey sous vide while sipping a Screaming Eagle 1997 cab. Instead of regaling us with your tales of gluttonous Thanksgiving meals past, zip it and eat your Stove Top stuffing and Ocean Spray cranberry sauce like the rest of us.

Those Who Wear Christmas Sweaters

The rest of us have a hard enough time getting through one holiday without already celebrating the one that’s a month away. These same people who insist on wearing reindeer-laden sweaters to the Thanksgiving table are the ones who know full well that B101.1 has been playing nothing but Christmas music since November 15th.

According to a very scientific survey I took, this happens more often than you might think. Just for the record, if you insist on bringing the latest bearded guy that you’re calling your boyfriend to Thanksgiving, at the very least, you need to ask the host if it’s OK. But my advice: just bring him a plate instead. This rule of uninvited guests on Thanksgiving also applies to non-humans. I heard one tale about a relative who showed up with a surprise date: her yappy new untrained puppy. Not cool. Not cool at all.

If you want to identify who in your group has sleep apnea, just wait until about 30 minutes after dinner and look at your couch. As revenge, I suggest posting photos of them and their gaping mouths on Instagram: #SnorersOfThanksgiving.

We’ve come to accept your meatless burgers, but I swear, if you tell me I could have made the mashed potatoes without butter, I may just throw a gravy boat at you.

These folks somehow don’t realize that the only reason you insist on hosting Thanksgiving each and every year is that you get to hide in the kitchen for most of the day instead of engaging in forced small talk. The worst of them remove pot lids for a peek. I have a special code with my wife: If she hears me say, “Man, that turkey smells good!,” this is code for “Get this person out of my kitchen. Now.” She’s much more diplomatic than I, who would tend to resort to accidentally splattering hot oil or breaking glasses in the general direction of the offender.

Thanksgiving happens exactly one day each year, and your host puts a lot of time, money and effort into it, so the least you can do is be on time. But if you are going to be late, at least pick up the phone and say so before you are actually late. If you’re asked to arrive at 4 p.m. and you live 30 minutes away and haven’t left by 3:45 p.m. (I believe in a 15-minute grace period), you should be picking up the phone post-haste.

As much as the late arrivals are a problem, even worse are the early arrivals, who tend to be of the same generation as the aggressive salters. They show up 30 minutes early, just when you’re frantically wiping down the bathroom or putting the finishing touches on the appetizers, and they have no idea how much they’re damaging your calm.

There are two types of people who will show up at your door with a supermarket pie. First, there’s the person who genuinely thinks that Acme pumpkin pie is just the best thing in the world, and you should just feel sorry for them, the same way that you feel sorry for the people who wait in line for two hours on a Saturday night for a table at the Cheesecake Factory. And the other type of person is the one who is just so inconsiderate that they couldn’t possibly be bothered to buy a pie at a real bakery or, you know, just bake a frigging pie. It’s really not that hard.

If the dishes were done long ago, the kids are all tucked into bed, and you’re still sitting on my couch while I’m scrolling around on Netflix trying to find something to veg out to, you’re doing it wrong. Just leave.

Yes, you should show up with a bottle of wine. No, it should not be in a jug. It should not be white zinfandel. And it should most definitely not have the word “Cupcake” or a picture of a kangaroo on the bottle.

Those Who Already Ate

I’ve never understood the early dining thing on Thanksgiving. You know, the people who host Thanksgiving and for some reason feel the need to serve the meal hours before they would serve a meal on any other day of the year. In my house, we serve Thanksgiving dinner no earlier than 6 p.m., because anything earlier is just uncivilized. The only problem with this is that you inevitably have a guest who shows up saying, “Well, when I heard you were eating so late, I decided to stop by my aunt’s house for some turkey and stuffing. So I’ll just have some salad.”

Yeah, belching is, it is claimed, a compliment in some countries. Here, it’s just gross. Take a Tums and mind your manners.

Trumpers, Bernie Bros, and the Rest of Them

Thanksgiving Day should be like your corner bar: no religion. No politics. Eat your turkey, watch your football, and save your views on impeachment for your social media followers.