Brendan Taliaferro, director of Homeward Initiative, is using the proceeds of a prize he won at Penn to find housing for Philly’s queer youth. 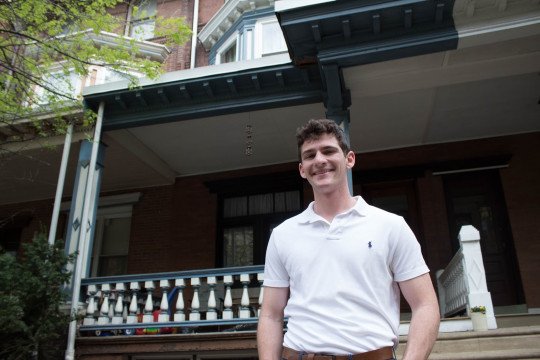 Each night tens of thousands of LGBT youth across the country sleep on the streets or in shelters, while thousands more teeter on the verge of homelessness: couchsurfing, sleeping in shelters, and taking any and every opportunity they can to find a roof over their heads. During a point-in-time count in 2018, Philadelphia’s Office of Homeless Services found that about one in four homeless respondents less than 24 years old — about 1,500 people in total — identified as LGBTQ, and national estimates put the number of LGBTQ youth at about 40 percent of the general homeless youth population.

Enter Brendan Taliaferro, a 2019 graduate of University of Pennsylvania. Taliaferro, one of Penn’s nine President’s Engagement Prize winners for 2019, is using the $100,000 grant to bring his passion project to life: Homeward Initiative, a host home system for queer homeless youth. The initiative is now beginning to seek hosts willing to house a young person for three to six months.

How did you get interested in researching queer homelessness?
I first learned about the issue of LGBTQ youth homelessness in fall of my junior year of college. Forty percent of the youth homeless population is LGBTQ — it’s deeply unsettling to me … but I realized that it makes perfect sense. All of the main sources of support for young people in our country tend to be anti-LGBTQ.

Why did you apply decide to apply for the President’s Engagement Prize?
I spent about 10 months doing research on the issue in Philadelphia and wrote a thesis basically delineating the resources available to LGBTQ youth, the quality of those resources, and the state of coordination among the organizations. When I started seeing advertisements for the President’s Engagement Prize, I thought to myself, “What a perfect opportunity to take this research and try to make a difference.” I had to wait two excruciating months; when I won, I really couldn’t believe it. [Penn president] Amy Gutmann called me on my cell phone when I was walking to my work-study job. I literally just collapsed on campus and spent the next two weeks not believing that it could have possibly happened. 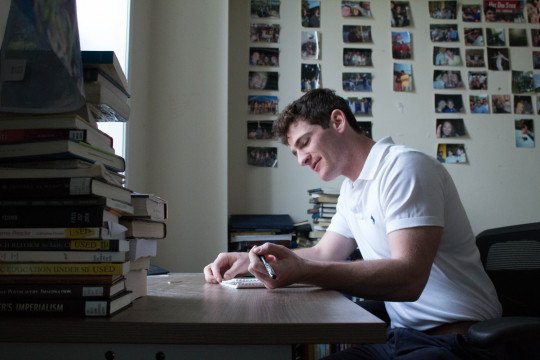 Taliaferro in his West Philadelphia apartment. Photo by Samuel Trilling

So why is queer homelessness a unique issue separate from homelessness in general?
It’s unique from youth homelessness generally for two reasons. One is the roots, which like youth homelessness are tied up in poverty and systemically under-resourced communities. But what makes it different is that queer youth often end up on the street because of conflicts over their identity with their communities, which means that they have virtually no support system. Queer youth have higher rates of mental health disorders, PTSD, higher rates of sexual victimization, and higher rates of drug and alcohol addiction because they have even less support than the average homeless youth. The other part is that many homeless services systematically disregard the needs of queer youth.

How does your host homes system differ from a traditional housing program?
Instead of spending the money on rent, we get to spend that money on supportive personnel. Our pilot will cost about 26 percent less to host a youth per month than a shelter … and no one wants to be in a shelter — people literally choose to be on the street because [shelters] are dangerous, particularly for queer youth.

Queer individuals have been creating families of choice for at least half a century, and we are simply trying to create a system of accountability and support that empowers that community so that more people have access to it.

What makes a good host?
Really what we’re looking for are people who are queer-affirming, are LGBTQ competent, are caring and patient, and can empathize with the challenges that these youth have faced. 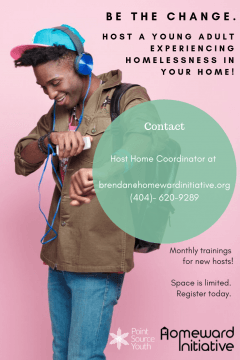 We don’t want the financial burden to prevent people from hosting, so we’re offering on a case-by-case basis a small stipend to offset the extra costs. We want to give young people the best homes possible, which has nothing to do with how much money a host has.

Homeward Initiative will be hosting an information session for potential hosts at 6 p.m. on Tuesday, October 29th, at the William Way Community Center, 1315 Spruce Street. Brendan can be reached at Brendan@HomewardInitiative.org or at the program’s website HomewardInitiative.org. This interview has been condensed and edited for clarity.