A now-viral video of the encounter, in which the officer can be heard telling a high school student to “remember you were shaking in a police car,” has the teen’s family alleging racial profiling. 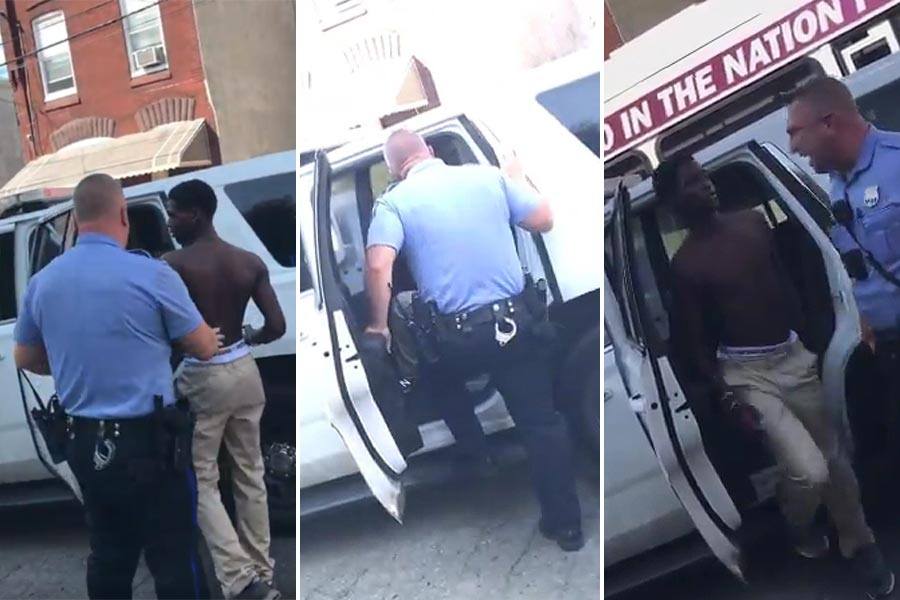 The Philadelphia Police Department is investigating an incident involving a white police officer and a 15-year-old black high school student in North Philadelphia last Thursday that has the teen’s family alleging racial profiling.

Two videos of the encounter — in which the officer can be seen holding the teen’s arm, aggressively ordering him into the back of a police SUV, and telling him to “remember you were shaking in a police car” after releasing him – were captured by fellow students and posted to Twitter and Instagram. The Twitter version has since been viewed more than 1.4 million times.

The teen in the videos, Jahvon Beener, says that he and roughly ten of his classmates had left Vaux Big Picture High School around 3 p.m. and walked a few blocks to catch a SEPTA bus at the intersection of 24th Street and Cecil B. Moore Avenue, where a white male police officer drove past the group, staring at them. The officer then returned minutes later with two more police vehicles and three additional officers.

Beener, who had taken his shirt off while at the stop because it “was getting too hot outside,” says things “got scary when more police cars came.”

“The cop who had drove past us came back with more cops, and this time he singled me out and gripped me by the arm,” Beener says. “I kept asking him why was he doing this. He squeezed hard on my arm as I tried to let go. He yelled at me to get inside his car, threw my legs in the back of the car, and slammed the door. I started shaking — I was scared for my life. I kept asking him what’s wrong and that I didn’t want any trouble. He kept yelling at me. I didn’t understand what was going on.”

“Don’t forget to tell your friends you were shaking in a cop’s car” (Full video is on IGTV) Now Philly this was exactly after school at the bus stop (there was a group of us) one cop car passed us and stared, 3 minutes later 2 cars came in front of us and 4 officers jumped out. Let me remind you it was 87 degrees outside. All of us were waiting for the bus when the officer grabbed the boy without his shirt and told him to “get in his car”. The video is only 4 minutes long. The officer pushed the boy in the car and slams the car door and proceeded to make the rest of us go away. 4 officers and none could tell us what the boy did besides the fact of wait for the bus along with the rest of the group. You can hear the cop saying “Make sure to tell your friends you were shaking in a cop’s car”. What i wasn’t able to record is the cop circling the block after he released the boy asking him “Are you good? You’re still shaking” Now @phillypolice @phillyscoophall @phillyscoophall__ The young boy is literally under the age of 16 on his way home picked up from the police in front of his classmates STILL with out an explanation. I will give you 3 days to respond @phillypolice then i will take this incident national. Thank you. #philadelphia #phillypolice #blacknews @cbsnews @cbsthismorning @philly_schools @nbcphiladelphia @abcnews @nowthisnews #blacklivesmatter #blackexcellence #blackexcellence✊🏾 @_latruth @blacklivesmatterdc @awokeblackgirlinmerica @blacklivesmattervideos @while_black #blackactivist #imnotplayingwiththis @blackgirlactivist @fresh_blacks #explorepage @phillypolice Your timer starts now. Go. Full video is on IGTV

As seen in the video, while Beener was inside the SUV, his classmates began confronting the officer, who then suggested that they “start walking home”; none of them left, citing their approaching bus. Asia Wilkerson, a 16-year-old student who shot the version of the encounter posted to Instagram, says she “knew something was wrong the moment the cops kept telling us to back up.”

“Von didn’t do anything wrong, and for them to just put him in a police car without telling him why didn’t make any sense,” Wilkerson says. “I pulled out my phone and filmed it because I wanted to make sure he was safe and for them to know that none of us were going to leave until he got out of that car alive.”

Other students who were present corroborated Beener’s and Wilkerson’s accounts. Wilkerson says that once it became obvious that Beener’s classmates were not leaving him behind, “the cop treated the situation as a joke and eventually let Von go.”

“The cop started laughing and smiling like what he was doing was okay,” Wilkerson says. “When he let Von out of the car, he told him to tell us why he stopped him and something very messed up.”

“He told me to remember that I was shaking in a police car,” Beener said after the officer had let him go. “Before I got out of the car, he had asked me why was I shaking and why had I taken my shirt off. I told him it was because it was hot outside and he acted like he didn’t believe me. He let me out and I felt humiliated and hurt.”

On Friday morning, Wilkerson says she asked the school counselor if they had heard anything about the incident and she was told that Beener hadn’t told anyone about it. Determined that “something should happen,” Wilkerson posted her video of the incident on Instagram and later the other version on Twitter.

The police department has not identified the officer involved or the reason for Beener’s detainment. “We take matters involving the stopping, detainment, and investigation of citizens very seriously,” a police spokesperson said in an email to Philadelphia magazine. “Accordingly, we have initiated an internal affairs investigation. Because the investigation is in the early stages, we are unable to provide further comment at this point.”

Hello. Please visit this link to file an Official Complaint Against Police. Please provide as much detail as possible on the form : https://t.co/stT64xFxZT

“I want answers — I want to know why the cops racially profiled my son,” says Frank Hudson, Beener’s father. “When I saw the video online, I was devastated. My son didn’t even want to tell me because he didn’t want me to be upset. He’s a good kid. This shouldn’t have happened to him.”

Hudson says that his family has not yet filed a formal complaint against the Philadelphia Police Department and is “exploring all options on the table to protect their child.”

“This isn’t right, and for police officers to think they can just pick up innocent children in the street and traumatize them like this is unacceptable,” Hudson adds. “My son should have never been treated like a second-class citizen in his own neighborhood. They didn’t read him his rights, they didn’t explain why he was stopped, and they didn’t care to contact us. This is wrong and something needs to be done immediately.”