Penn Book Center’s New Owners on Kindles, Coffee, and Why They’re Still Not Sure About the Name

Matt Duques and Diana Bellonby, who officially take over the venerable store on September 1st, discuss their vision — and the thorny issue of what to call the place. 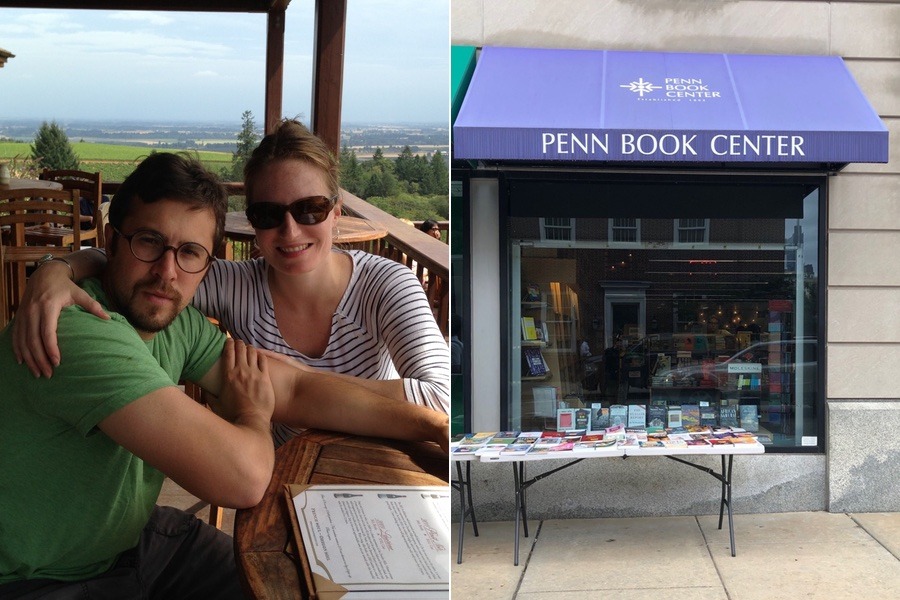 When the Penn Book Center’s owners announced in April that they were planning to shutter the 57-year-old store, professors and students protested, unwilling to pledge fealty to the Barnes & Noble overlord nearby. An online petition was circulated, which soon received 5,000 signatures. The end of a bookstore is often anticlimactic, but in this case, there appeared to be a compelling final act. People actually cared about something.

In fact, two people who’d just recently moved to Philly — Matt Duques, a Haverford College grad and professor at the University of North Alabama, and his wife, Diana Bellonby, herself a writer and English PhD — cared so much they decided to swoop in and buy it. Owning a bookstore had always been an “alternative career path,” says Duques, who gave up his tenure-track job in Alabama to move here with dreams of opening up a store of his own. Duques and Bellonby learned that the Penn Book Center hadn’t turned a profit in three years, but they weren’t scared off.

We caught up with them to hear about their vision for the store and the thorny issue of what — or even whether — to rename the place.

What do you say in response to the prevailing narrative, true or not, that books and print are dead?
MD:  Those narratives — that technology is making us stupider or that we’re not into material culture the way that we were before — are always a little bit overblown. Particularly when it comes to books. Most people who got hooked on the Kindle, for instance, about a year or two later were a little bit bored by the whole thing and missed books.

You have the stats on your side. Independent bookstores grew 35 percent from 2009 to 2015, and physical sales have increased, albeit very slightly, every year since 2013.
MD: The second stat you just mentioned we popped in our business plan. I remember that exact stat.

Do you view the resurgence of books as a nostalgia item? The popularity of physical records comes to mind — does that comparison make sense?
DB: Books serve lots of different functions. People are thinking about them for gifts, or for their own personal pleasure. I don’t think it’s a nostalgia thing.

MD: Records are their own item — you need a record player, there’s a whole thing. When it comes to books, you just need a book and there you go. They’ve always been a central part of everyday culture.

What are you planning to do to turn the Book Center back onto a profitable path? The textbook age is gone in many respects.
MD: We’re fully aware of that. We’re thinking in a very long-term framework for getting the store doing well. For us that means we have to think about developing a specific membership program for the store. We need to do periodic fundraising. We will definitely be doing some small-scale renovations to make the store more of a community space.

Even recently, much of the first floor was dedicated to shelving books that professors had assigned to classes. Will that change?
MD: That’s been phased out of the store progressively over the last few years. We’re still going to be — or I should say, we hope to be — the go-to place for folks who are local writers and scholars. We still hope to offer a great selection of works by university faculty in the broader area and by writers in the broader area.

Has either of you ever owned a business before?
MD: Neither of us are business owners. I have pretty good background in hospitality and a little bit in retail more generally.

What do you think of the coffee shop/bookstore model? Should bookstores stand alone?
DB: We are complete coffee lovers. We were a little bit sad when we had to grapple with the Penn Book Center’s physical space and limitations. We’re next to a Starbucks.

MD: We think coffee and bookstores go hand in hand, but one of the things we like about the Penn Book Center is that it’s books first, books only.

I’d be remiss if I didn’t ask what each of you is reading at the moment.
DB: I’m reading Imani Perry’s Vexy Thing. Her latest is Breathe: A Letter to My Sons. That’s next in my lineup.

MD: I just finished Brandon Hobson’s Where the Dead Sit Talking. And I recently picked up an old classic, John Bunyon’s Pilgrim’s Progress.

What about the store’s name? There was a survey sent out with three possible candidates. Are you going with what the community voted on?
MD: We haven’t decided, at all, what we’re going to name the store, or if we’re going to even change the name. But we’re exploring those avenues. Some people just wrote in “Penn Book Center.” They don’t want us to change the name.

DB: I’m in the opposing camp. I feel very strongly about changing the name. People still, every day, come in asking for the university T-shirt section. It’s confusing! The people who kept this store alive are the community members who protested in the name of valuing and preserving an independent, non-corporate bookshop. That’s part of its identity. So changing it will actually help it embrace what makes it great: its independence.