The sign will be on display at the Railroad Museum of Pennsylvania for the next three years. But the work-in-progress exhibit doesn’t have quite the same glitz and glamor as the sign’s old 30th Street home. 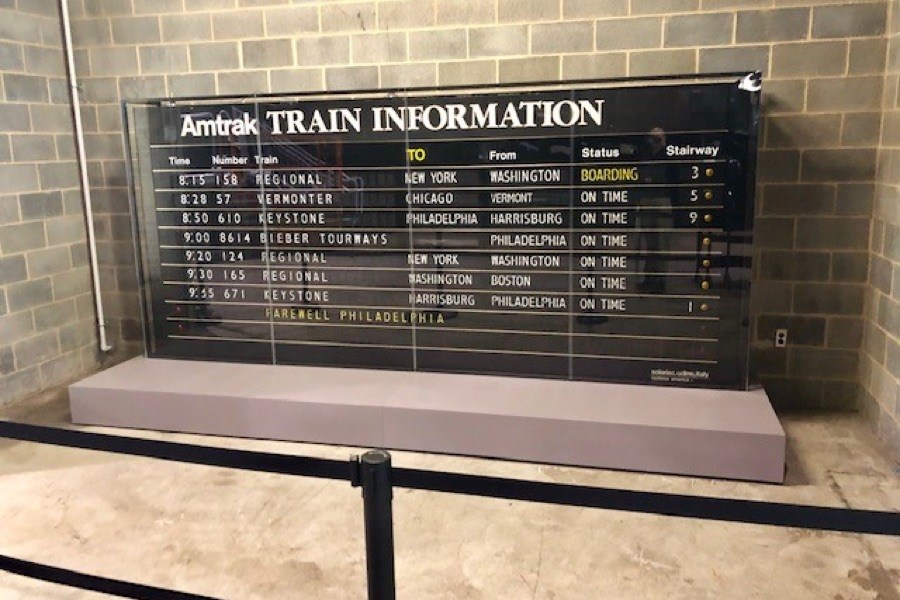 The old Amtrak flipboard from 30th Street Station was the Ferrari of flipboards. It was a sort of royalty, sprung from the heads and hands of the Italian craftsman of Solari. And for the first 48 years of the flipboard’s life, it occupied a space befitting its splendor: the grand, high-ceilinged Art Deco 30th Street Station.

But, as you know, things have been changing over at 30th Street. Amtrak got rid of the Solari flipboard — the last of its kind in the nationwide train network — and replaced it with the blinding blue-light monstrosity seen below. (The reason had to do with the old sign’s n0n-compliance with the ADA; although, it must be said, Philly company Oat Foundry said that it could have built a modern, replacement flipboard that fulfilled the ADA. Amtrak declined to take them up on it.)

Anyway, despite the widespread condemnation of Amtrak’s murder-in-plain-sight of the Solari flipboard, the powers that be refused to be derailed and barreled forward. The board’s current resting place now lies at the Railroad Museum of Pennsylvania, in Strasburg.

That’s not a bad fit, as far as it goes, but the sign’s current living quarters — in a lonely corner that looks like a prison, or a looted grave — are a pretty stark downgrade. Fortunately, museum director Patrick Morrison says the current exhibit — which you can visit now — remains a work in progress. The museum intends to install a plaque in front of the board, complete with an embedded screen showing the flipboard back in action, before the rigor mortis set in. And Morrison plans to repaint the walls behind the board into a faux-marble scheme so that one might imagine — with a considerable amount of exertion — the board back in its original habitat. Still, we can’t help but feel the sign deserves better.

There remains some chance that the flipboard could be exhumed once more and returned to 30th Street. The Railroad Museum agreed to keep the sign safe and display it for three years while Amtrak contemplates a redesign of the station. The Solari could end up reincorporated there as a sort of bygone relic, like a dinosaur skeleton, for people to gawk at.

But at least it wouldn’t be alone.