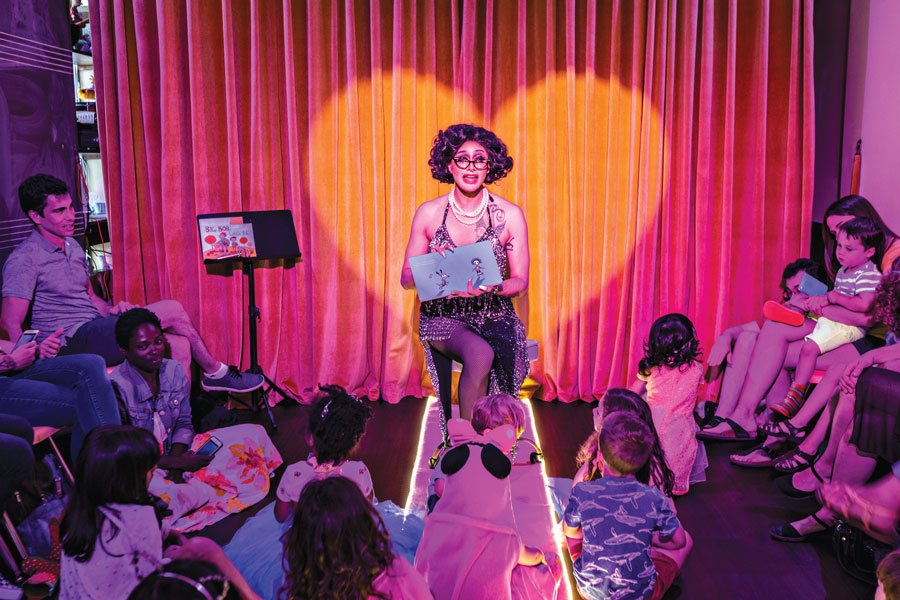 There’s only one thing to know about Drag Queen Storytime, and that’s the proper lingo. Which is precisely why the fabulous Miss Maria TopCatt kicked off the afternoon event at Mister John’s Music in Bella Vista the way she did. “Stick your finger in the air,” she told the children as she strutted around the room in stilettos that took her naturally six-foot-one frame to goddess level. “Wave it real high, and then you are going to wave it up and then all the way down.” Maria demonstrated, twisting toward the ground like Chubby Checker. “And yell, ‘YAAASSSS QUEEEEN!!!’”

The 20 or so kids, ranging from new walkers to ponytailed tweens, gave it a go: “YAAASSSS QUEEEEN!”

“Now, you can do that at me, you can do that at a person in the supermarket if you like that fruit — ‘Yaaasss Queeeen, that’s a good orange’ — or you can do it in the morning. Parents, this is the new ‘Baby Shark.’” And with that well-landed one-liner, Maria flicked her fur-lined cape, pivoted on her heels, and moved on to the next activity.

John Francisco — Mister John, to most — has been running music and instrument classes out of his studio for a few years now. He’s musically gifted, for sure. And his classes expose kids to good music. (No Raffi here.) But he’s earned his scores of devotees because of his messaging: He insists that kids follow instructions and learn to greet friends properly, and he destigmatizes hard conversations — on topics like gender, homosexuality, race, equality — all while strumming his guitar to the Killers, Nina Simone, Pink and the Four Tops. So a monthly event at which a drag queen reads stories to children is very on-brand. It’s a dance party with an underlying message: It’s okay to look different and be different and be friends with people who look different. Actually, it’s pretty awesome.

It was time for the kids to walk the runway. A small girl named Levity worked the illuminated pink catwalk like Gigi Hadid at Fashion Week while Miss Maria emceed, telling onlookers all about Levity’s outfit and what makes her special. Three-year-old Nina, in a sparkly dress and Crocs, gleefully strode the gauntlet twice. Maia was in a Wonder Woman costume and wanted to hold her mom’s hand. James, age seven, smiled the whole way while everyone cheered. Two siblings with enviable curls, who preferred the pronouns “they” and “their,” wore suspenders and shorts. One toddler was dressed as Prince.

Maria then removed her cape to expose the sparkly dress beneath, took a seat, and put on her reading glasses. The children gathered at her fishnet-adorned feet as she read them I Like Myself, by Karen Beaumont. (The book’s message was apt, but the highlight was when one of Maria’s fake nails flew into the crowd.)

After the story, Mister John held a fairy-tale-style mirror up to each kid and asked them what they liked about what they saw. Parents weren’t spared — Mister John is big on parent modeling. Answers ranged from “My ears” to “That I’m a good friend.”

Naturally, the hour-long event concluded with dancing. Naturally, the song was by queen icon Whitney Houston. The disco ball twirled, and everyone in the room happily broke it down to “I Wanna Dance With Somebody.” But all the kids really wanted was a turn spinning with Miss Maria.

Published as “The Queen” in the August 2019 issue of Philadelphia magazine.