Hikes announced this week that she's stepping down as the organization's executive director. We caught up with her to hear about some of the biggest challenges and successes during her tenure. 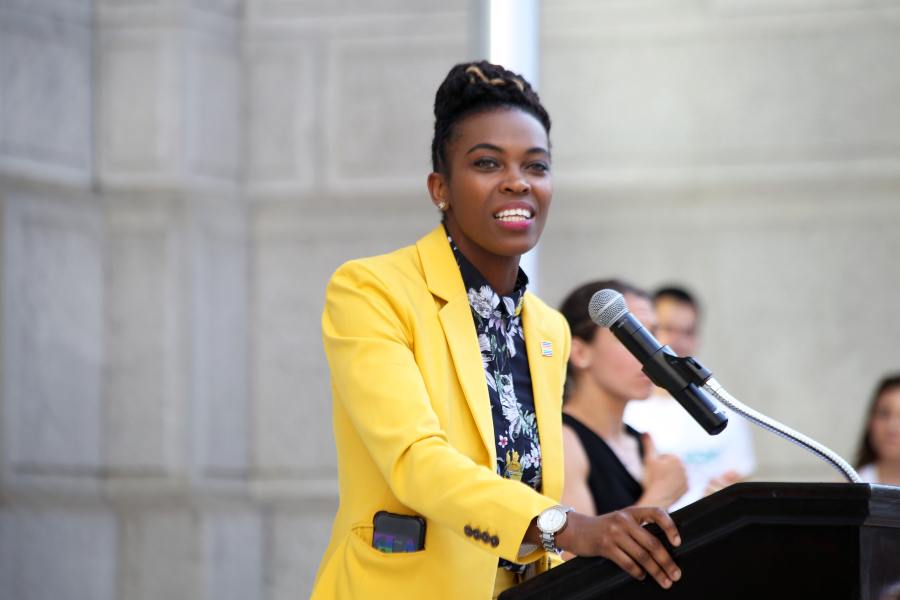 Amber Hikes | Photo courtesy of the City of Philadelphia

Amber Hikes, who has led the city’s Office of LGBT Affairs for the past two years, announced her resignation earlier this week.

Hikes, a black queer woman and longtime community advocate, stepped into the organization’s executive director role at a particularly contentious time. Philly’s LGBTQ community was in the middle of a reckoning with racism among its own, sparked by expressions of bigotry and racial bias at the some of the Gayborhood’s most popular bars and frustration over the majority-white leadership boards among nonprofit organizations serving the LGBTQ community.

Hikes, who sought to support and elevate distraught community members, launched both office- and city-wide efforts to increase transparency and inclusion. During her time in the office, she aided in introducing the More Color, More Pride flag (with black and brown stripes to represent LGBTQ people of color), launched the LGBTQ Community Leadership Pipeline to diversify the boards of community nonprofits, and worked with the Philadelphia Police Department to institute a policy to guide officers toward dignified treatment of transgender and non-binary residents.

We caught up with Hikes to hear about navigating her role during this time, the personal toll it took, and what’s she’s proudest of.

How have you changed since the first day you stepped into this role?
[Laughs] God. I’m searching for an honest but balanced answer. I think I’m more realistic about the challenges that our communities face, and I have a better, more nuanced understanding of how crucial it is for us to work together to resolve those challenges. I came into this job fairly idealistic — as one would have to be to take it on at the time that I did.

You stepped into this role in a tumultuous time, when racism was marking the Gayborhood. How did you work to confront that? What did you see?
What we saw over and over — from the protests, from the boycotts, from the calls for resignations, even down to the social media outcry — was that communities in crisis had been historically silenced and were fed up. As a social worker, my first task was to hear what the community was saying. Too often government doesn’t do that — it thinks it knows what’s best for these communities and doesn’t even bring them to the table. We created the Community Conversations Initiative to say [to people], “Let’s talk about what you see as the deepest concerns impacting our community, and let’s solve our problems collectively.” That was the first thing I did and probably the most important. Listen to people, and they give you the answers.

What more needs to be done?
There are a lot of things … But I think frankly what’s most important is having LGBTQ people of color leading our communities. That’s it. Whether from a nonprofit or government or business perspective, we need to have LGBTQ people of color — those bodies, those experiences and those lives — leading us forward and dramatically changing the conversation.

What’s the biggest challenge you faced in this role?
[Bureaucracy was] one of the biggest challenges, especially being an outsider to government. But the most signficant challenge has been fighting battles on the inside and on the outside [of the office] at the same time. Often our community was so in crisis and dealing with so much historical trauma that we were fighting each other. A lot of that fight was valid, but it was very difficult to be fighting within our communities and also fighting outside of them — to be pushing for policies and fighting violence, real violence like hate crimes and murder. Those battles really speak to how lonely this work can be. I never felt like the cup was full again.

On the subject of inner and outer battles, should change come from within the system or outside of it?
[Pause] Every example we have in history demonstrates that you need folks operating on both sides of the door. You need activists outside [the system] demanding for greater inclusion, greater equality and to be free from oppression, and you need people on the inside to advocate to the folks who have the power. You have to have folks working in tandem or nothing gets done. We see that happening with all social movements from the beginning of time.

You mentioned feeling lonely. Did you ever feel like the city had too many expectations for the person in your position, especially if that person is advocating for a community with whom they have deep and personal ties?
[pause] No. I want to be clear because I think this is important not just for my successor, but also as an example for how we do movement work as a whole. I came into this job at a time when the community was in crisis, and I was well aware that what was required would not be sustainable long-term. In my very first conversation with the mayor, I said, “I want to do this job, but you will have me for three years tops, because this will mean 14-hour days and a toll on my mental health and spirit that is not sustainable.” I don’t think the city places too much pressure on the person in this role, I think I put that pressure on myself. I did that work so my successor won’t have to. I hope the person who enters this roll will be able to move forward without absorbing that trauma.

Let’s talk about political unrest on a nationwide scale. There’s been an uptick in hate crimes in recent years against people of color and the LGBTQ community. How did that affect you personally in your role?
My experience was multilayered. Our office was on the front line of receiving calls and emails from victims who had been subjected to hate crimes. There was this personal experience of people who looked like me being impacted on the street, which was frankly deeply traumatizing. And there was this professional experience of, “How do we use our resources and leverage our power to work with police and community members to address these issues more proactively?” Again, it was challenging because we were pushing for hate crime legislation, we were working with the [district attorney]’s office when folks were on trial for what could have been seen as hate crimes, and we were working with police to discuss how to communicate with victims of hate-based violence. It always felt like there was more work that needed to be done, and I can’t overstate the toll that it takes personally when you see people in your community brutalized in such a way.

How do you think most LGBTQ Philadelphians view this office?
I think there’s a signficant chunk of LGBTQ Philadelphians that don’t even know the office exists, and that’s sad to me, because Philadelphia has really been leading this work in such a profound way for such a long time. But for the folks who do know, I think there are plenty of critiques — because we as LGBTQ people always gotta critique something. [Laughs] I think there are critiques that we could work more collaboratively with the community, but overall I think folks are really impressed, especially when they find out there are only two full-time staff members in the office.

What are you most proud of?
Our LGBTQ Leadership Pipeline Initiative. When I came into this work, the community was calling for a number of things in regard to addressing racism within the LGBTQ community, and one of those calls was for our leadership to more accurately represent the communities it’s serving. What we built was an opportunity to change the face of our leadership for years to come. We weren’t just looking [for leaders] in terms of racial diversity — we wanted to make sure we had more young people, more elders, more immigrants, more trans people, more people living with disabilities. I’m blown away that we have 20 incredibly qualified folks who are stepping onto the boards of our LGBTQ-plus nonprofits this month. It’s not just about them being at the table, it’s about the way they’re able to open the door and pull folks through the door with them.

What needs to happen next?
We need to continue the work we’ve been able to do with the Department of Prisons around trans folk who are incarcerated in Philadelphia.

And what’s next for your personally?
I have a big plan for what’s coming, but I’ll be announcing that next week. I have to finalize a few things with my future employer, and I’m unfortunately not at liberty to say anything yet.

How about a long-term plan?
You know that saying, “Man plans, God laughs?” I feel like that’s been particularly true for my career journey. I stopped guessing a long time ago. I just hope I’m able to be useful to folks in need, whatever that means.