It’s free to attend and free to participate in, and will run concurrently with September’s big “official” Fringe. 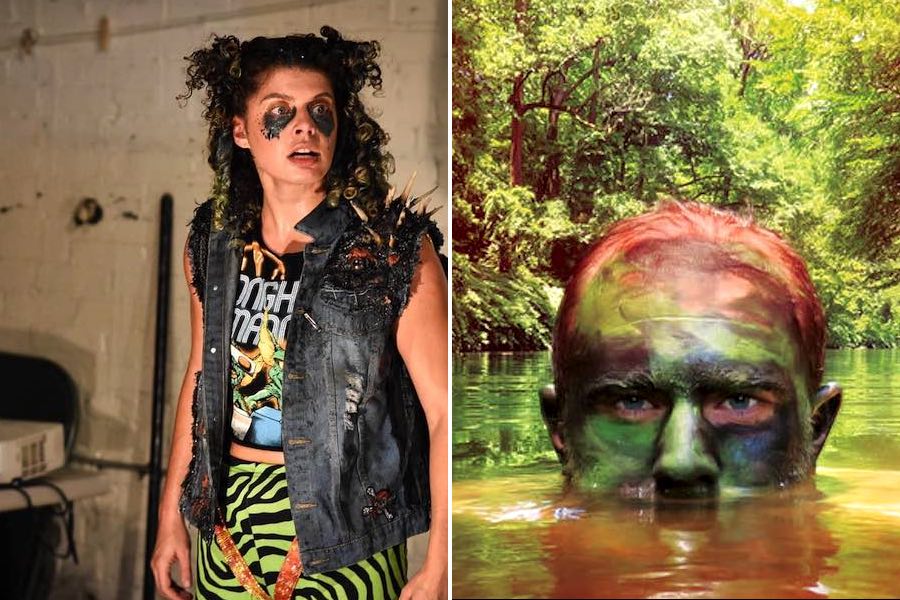 Two of the participants in Free Fringe Philly. Left: Sarah Knittel in her 2018 show Nightmare Fuel. Right: Chris Davis in his previous production of One Man Apocalypse Now.

This September, as has happened every year since 1997, scores of performers and thousands of spectators will take to the city for the Philadelphia Fringe Festival. But things are just a wee bit more complicated this year. You see, there are going to be two “Fringe” festivals happening in Philly over the exact same dates, and the one has absolutely nothing to do with the other.

“We’ve been getting really bummed out over how ‘fringe’ in this town has started to feel really exclusive and unaffordable,” says Philadelphia performer Sarah Knittel, one of the creative minds behind Free Fringe Philly. “So we’re going to take fringe back to the people and Robin Hood it a bit.”

At the Philadelphia Fringe Festival, the vast majority of shows require paid admission — and some of these performances are not exactly cheap to attend, with tickets for the curated shows (those are the shows that the festival invites to participate) regularly closing in on the $50 mark.

But at Free Fringe Philly, all shows will be free to attend, though performers are encouraged to pass that hat, as they say.

And with the Philadelphia Fringe Festival, artists who aren’t invited but who still want to be involved are required to pay a $350 registration fee, which basically gets them listed in a thick printed guide and on an overcrowded website, in addition to some other minor benefits.

With Free Fringe Philly, there are zero registration fees. You pretty much just fill out this Google form, and you’re in.

After putting up the registration fee, buying her own insurance, renting a venue, and paying all the other costs involved in presenting Nightmare Fuel, Knittel says that she did manage to eke out a very small profit.

“But it wasn’t easy,” she observes. “I did a lot of two-for-one deals. I had a box of wine and asked for donations for a glass. And keep in mind that this was at Panorama in Southwest Philly, one of the cheapest venues in the city you can possibly get, and that I’m the only person in the show. I’m one of the lucky ones.”

Also keep in mind that Nightmare Fuel was easily one of the more talked-about and buzzy events of the non-curated portion of last year’s fest.

Knittel estimates that she’d have to put up about $800 to $1,000 just in startup costs if she were to participate in this year’s Philadelphia Fringe Festival, and she says she just doesn’t have it to spare. She’ll be doing Free Fringe Philly instead.

To her and her loose collective of cohorts at Free Fringe Philly (it’s one of those things where they all say that nobody is “in charge,” almost like it’s some Occupy Fringe sort of thing), the whole idea of “fringe” should be inclusive and engaging to artists and the community alike.

Thirty-seven-year-old South Philly theater maker Chris Davis is a veteran of the Philadelphia Fringe Festival, but he’s opting for Free Fringe Philly, too. In fact, he’s already signed up.

“I didn’t want to pay the registration fee,” he told me. “So this seems better for me.”

Adding a bit of intrigue to his show, Davis isn’t announcing the location for it. Instead, he’s directing attendees to gather at the intersection of 20th and Walnut at a given date and time, and then they’ll be escorted to the performance area.

Other performers and venues are beginning to trickle in — again, Free Fringe Philly was just announced. But some of the venues currently include Dock Street Cannery, Rittenhouse Square, and popular Center City bar Jose Pistola’s.

And in one case, the very streets of Philadelphia will themselves become a venue. In Bits on a Bike, Philadelphia comedians will ride around town with a battery-powered PA system attached to their bikes, telling jokes to people they encounter on the street.

“Fringe is not about being in a theater,” says West Philly’s Betty Smithsonian (her stage name), 40, the Free Fringe Philly collaborator behind Bits on a Bike. “Go do a show on some Septa line at 3 p.m. Maybe you’re in a cafe a second ago and now a show just spontaneously starts happening. Maybe you’re sitting in the park and all of a sudden a small stage and a curtain show up. Maybe we sneak some instruments into the Bok Building and start playing some crazy music on the roof before somebody tells us to leave.”