The effort is being framed as a traffic-easing measure. But to find the real source of Philly’s traffic problem, we must look inward. 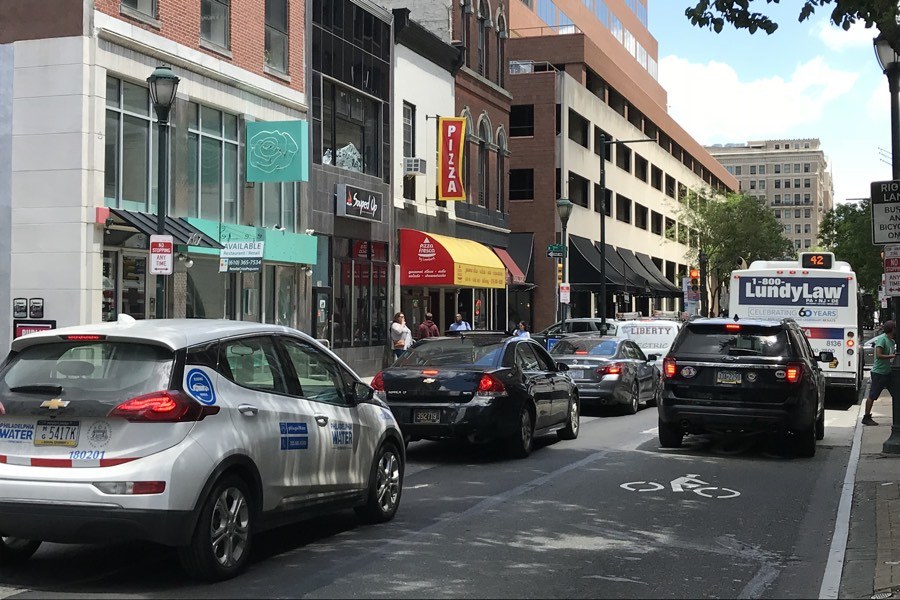 The city’s hoping enhanced bus lane restrictions will reduce midday traffic like this along Chestnut Street in Center City. Photo by Ella Comberg.

If you’re taking an Uber or a Lyft in Center City this summer, you might want to tell your driver to avoid dropping you off in a bus lane at all costs, because on Monday, the Parking Authority and other enforcers started specifically targeting motorists who dawdle and obstruct traffic in the right-hand lane.

The heightened enforcement is part of an ongoing attempt by the city to mitigate some of our soul-crushing, wheel-stopping traffic. The Mayor’s Office has considered all manner of radical proposals, including a so-called “congestion fee,” which would theoretically be levied on vehicles entering certain parts of the city. New York City will be implementing its own congestion fee — a still-undetermined amount — in 2021.

Philadelphia isn’t going that far yet, so in the meantime, the city’s been taking slightly less progressive corrective action: issuing tons of tickets. Last September various enforcement agencies, including SEPTA, the PPA, and the Police Department, announced that they’d be targeting traffic violators along two stretches of Center City — from 11th to 21st streets on Chestnut, and from 7th to City Hall on Market. On Monday, that zone expanded on Chestnut, from 7th to 23rd streets.

Of course, as is the case with many things related to SEPTA and the PPA, the policy has garnered its share of critics. The most common refrain seems to be what’s perceived as a double standard when it comes to the driving behavior of SEPTA buses. “How about SEPTA buses that block intersections and go through red lights?” one commenter noted. And of course, our abysmal pothole situation came up, too.

If only the city put the same energy on cracking down on the potholes!

One person pointed out what actually seems like a real possible drawback to the increased enforcement:

But according to the city’s results from the first ticketing onslaught, which ran from late September to this January, extra ticketing didn’t end up making things worse. A total of 3,635 citations were doled out over that period, mostly by the PPA, and the city reported that bus travel times along Chestnut Street decreased by a total of 6 percent. In the especially bunched corridor between the Delaware and Schuylkill rivers, that amounted to two and a half minutes being sliced off the travel time. A small amount, yes, but 2.5 minutes a day, both ways, over a commuter’s entire year could add up to something like 20 hours saved in traffic! That’s enough time to finish off that pesky Dostoevsky novel you’ve been reading since college ended.

Whose fault is this citywide traffic jam? Recently, Lyft and Uber drivers have drawn much of the public’s ire for blocking traffic. They’re certainly an easy target, given their relative novelty. But it’s worth remembering that cab drivers have been stopping in the middle of the street for decades to drop off passengers, too.

If anything, the blame placed on ride-share vehicles obscures one of the other biggest offenders: delivery trucks. (Your same-day Amazon Prime delivery didn’t drop to your front porch from the sky — at least not yet.) Unlike Lyft and Uber drivers, who surely want to avoid tickets, for delivery couriers, getting ticketed in big cities has long been thought of simply as a cost of doing business. A report from the Center City District found that across the city in 2017, delivery couriers were ticketed more than 93,000 times, incurring fines in excess of $28 million.

The explosion of ride-share vehicles and delivery trucks are ultimately just a symptom. Much of this traffic is being caused by Philadelphians who are consuming more and more — taking Ubers instead of the El, or getting grocery delivery instead of shopping in person. Convenience has a cost. Just something to think about next time you’re stuck in traffic.