"Rather than spread lies about me and my campaign, Councilwoman Blackwell should address the serious concerns residents have about gentrification and her use of councilmanic prerogative," says her primary opponent, Jamie Gauthier. 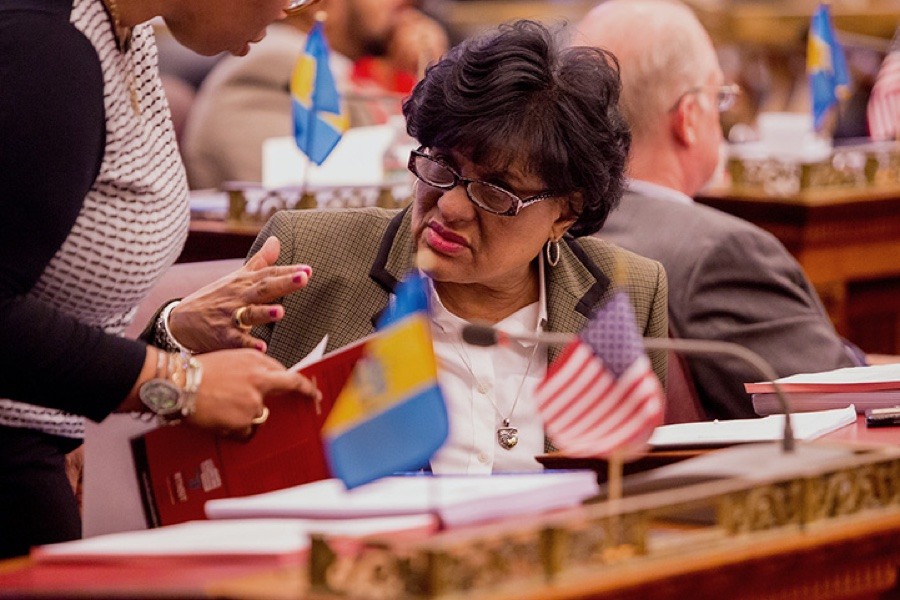 As the May 21st primary election nears, tensions continue to escalate in the contested race for City Council’s District 3 seat between longtime incumbent Jannie Blackwell and challenger Jamie Gauthier, the former executive director of the Fairmount Park Conservancy.

During a candidates forum held on April 25th by the 27th Democratic Ward in West Philly, Blackwell accused the Black and Brown Workers Cooperative (BBWC) of being Gauthier supporters who instigated the violence that erupted during her reelection kickoff event at the Enterprise Center on February 19th.

During that event, a series of violent threats and an alleged attack against BBWC protesters were made by supporters of Blackwell’s campaign and caught on video. This incident was followed days later by a protest against Blackwell during a City Council session, at which BBWC co-founder Abdul-Aliy Muhammad was arrested and charged with aggravated assault and reckless endangerment, among other counts. (All charges except a summary disorderly conduct charge were later dropped by the DA’s Office.)

Blackwell’s remarks at the forum, which was attended by roughly 50 Democratic committee people in the 27th Ward, were prompted by a question from committee person Gwen Snyder, who asked Blackwell if she could address the rape threats made against members of the BBWC by her campaign supporter and former staffer Michael Youngblood at the kickoff event.

In the audio, Blackwell does not directly address Snyder’s question, but instead blames the activists for the incident. “It was those people who came into my announcement … they were fighting people,” Blackwell says. “If you want to know who started it, you should ask them.

“The same person, I don’t know, I don’t remember his name — I never paid it any mind — who started that there, then came to Council that Thursday and hit a cop in the face and got arrested,” Blackwell says, apparently referring to Muhammad, who was not in fact present at the reelection kickoff. “So don’t ask me why he’s arrested. He hit an officer in the face and got arrested and was jailed for it. So those are the people who are bumped in this race and who are supporting my opponent’s campaign.

“Those are the kinds of activities that are happening,” Blackwell continues in the recording. “I’ve had opponents before, I mean that’s fine, that’s the American way, but the dirty activities and the dirty things, the fighting — I’ve had a sheriff assigned to my office. The things that are happening in this campaign I’ve never seen happen before and I resent it, because people have a right to run, but they should be decent about what they do. But the lies and the things they are doing now are just terrible.”

Since the forum, Blackwell’s remarks have been met with mixed reaction in the district.

“I asked the question because I felt that we couldn’t as committee people make an informed decision in this election without hearing directly from Councilwoman Blackwell about the rape threat made against BBWC members on her behalf by her supporters,” Snyder said. “I was disappointed that in her response she refused to hold her own supporters accountable for that threat and instead dishonestly tried to characterize Abdul-Aliy as a violent criminal.”

“I didn’t know who or what to believe after hearing Blackwell speak,” said Pam Williams, a committee person who attended the forum. “I’m not a Gauthier supporter — I’m trying to hear from both of the candidates. As someone who wasn’t at Blackwell’s announcement event, something just seemed confusing about the information she gave.”

“Blackwell said a lot of things that were not true that had already been disputed in the press,” said Caroline Winschel, a committee person who was also at the forum. “She didn’t actually answer Gwen’s question and refused to have a debate on the issues with Gauthier even though she was accusing her of so many things.”

“I flatly deny any involvement with these protests. I first learned about these events through the media,” Gauthier told Philadelphia magazine. “Rather than spread lies about me and my campaign, Councilwoman Blackwell should address the serious concerns residents have about gentrification and her use of councilmanic prerogative.”

“Anyone who has followed the work of the Black and Brown Workers Cooperative for the last three and a half years will know that we are labor organizers who have forged not one, but several successful worker-led campaigns in our LGBTQIA community pockets,” said BBWC co-founder Shani Akilah, regarding Blackwell’s accusations. “Every single member who has been displaced in the BBWC is a current constituent of Jannie Blackwell. We have never been able to be bought, much to the chagrin of those who have tried. Therefore, when Blackwell blatantly lies yet again to the community who she is accountable to, it further supports our deepest knowing.”

The 27th Ward will be meeting on Tuesday night to deliberate on which Democratic candidate they will officially endorse.