Here’s When Spruce Street Harbor Park Reopens for the Summer

Plus just-released event highlights to get you excited for Philly’s waterfront park season. 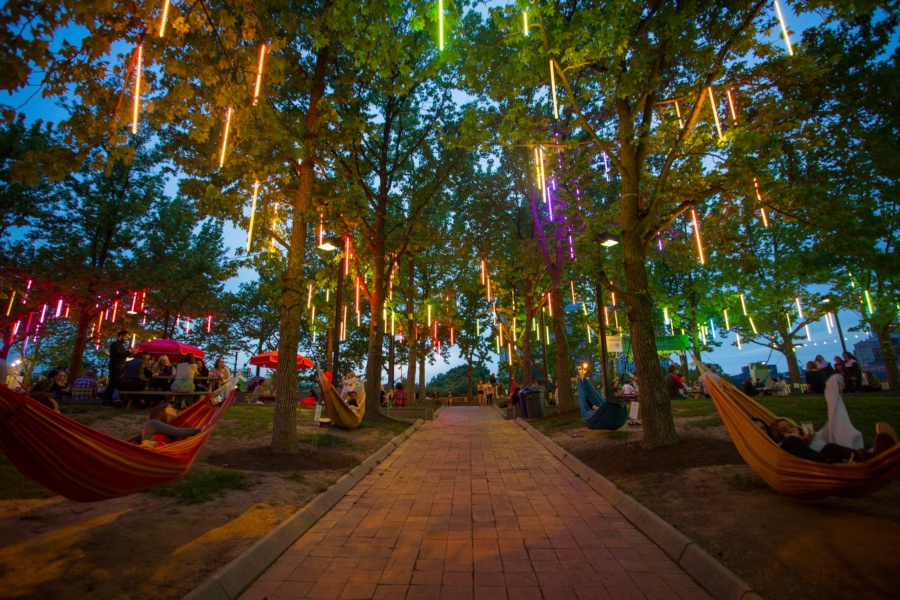 It’s only beginning to truly feel like spring now that temperatures are rising and flowers are blooming all around us — so naturally, we’re eagerly anticipating even warmer days.

Mark your calendars: Starting on May 10th, you’ll be able to beckon summer on the Delaware River Waterfront. That’s when the area’s beloved public spaces — Spruce Street Harbor Park, Blue Cross RiverRink Summerfest, and the Great Plaza at Penn’s Landing — will all reopen for the season. The new Cherry Street Pier, which is open year-round, will also welcome its first slate of summer programming.

What to expect during kickoff weekend? For starters, the Art Star Craft Bazaar will take place at the Great Plaza at Penn’s Landing, the Dream Philly Children’s Festival will come to Cherry Street Pier, Blue Cross RiverRink Summerfest will host a roller skating party …. and more.

We’ve pulled out some highlights planned at each of the parks this year. Here’s what to keep an eye out for.

(FYI: We don’t want to think about closing dates, but they’re good to know. For future planning, Blue Cross RiverRink Summerfest and the Great Plaza at Penn’s Landing will close on September 1st. Spruce Street Harbor Park will close on September 29th. Luckily for us, Cherry Street Pier is open year-round, as mentioned — so you can still soak in those river views through the fall and winter.)

For more information on the parks, including hours for each location, visit the Delaware River Waterfront Corporation website.

This festival series at the Great Plaza at Penn’s Landing will highlight diverse cultures in Philly. Here’s the lineup:

The waterfront will host three interactive events this summer to honor the 200th anniversary of the birth of writer Walt Whitman. (He was born on May 31st, 1819 — which makes him a gemini!) Whitman often traveled between Camden and Philadelphia via ferry. (He also had some nice things to say about City Hall.) Events include a “multimedia, sensory experience” debuting aboard the RiverLink Ferry on May 25th; performances by the Bearded Ladies running May 31st to June 2nd at Cherry Street Pier; and an interpretation of Whitman’s “Song of the Open Road” in the form of an art installation aboard a floating barge on the Delaware River, happening on June 4th and 5th at Cherry Street Pier.

Happening between 4 p.m. and 6 p.m. on the second Sunday of the month, May through September. The schedule:

Free dance lessons and performances courtesy of Dance Republic. Happening between 7 p.m. and 11 p.m. on May 17th, July 19th, and September 20th.

Up to 20 art and craft vendors flood Spruce Street Harbor Park between 12 p.m. and 5 p.m. every Saturday between May 19th and September 29th.

I Love My Rowhouse

Supported by The Pew Center for Arts & Heritage, this project will celebrate Philly’s love for its rowhomes. Expect an installation full of with Philly’s social history in the forms of songs, recipes, photos, objects, and stories. Running between June 7th and June 30th at Cherry Street Pier.

Running between 7:30 p.m. and 9 p.m. every Friday in August at Penn’s Landing. The schedule: